An Amsterdam self-guided walking tour is one of the best ways to explore and discover this wonderful capital city in the Netherlands.

As one of the most popular destinations in Europe, Amsterdam needs no introduction. Millions have flocked to this city’s famed waterways and narrow lanes searching for art, unique architecture, drinking, and dining. But it’s the magical atmosphere of this Dutch city that captures travelers’ hearts.

Exploring Amsterdam on foot is a pleasure. Exploring the atmospheric streets reveals a multitude of treasures, from hidden garden squares to antique shops with old-world riches. Wander further afield, and the center’s once-industrial outskirts are now home to a gentrified mix of design firms, popup creative markets, and a dizzying array of fantastic breweries, restaurants, and clubs.

Amsterdam is also one of Europe’s greatest centers of art. The star of the show is the Rijksmuseum, holding over 800 years of treasured Dutch art and artifacts, but it’s closely followed by the Van Gogh Museum, with the world’s largest collection of the artist’s work. Stray away from the big hitters, and you’ll also turn up an almost endless amount of smaller, local galleries; you’ll quickly realize that this city truly has a creative and imaginative soul.

Alas, Amsterdam is also well-known for its seedy underbelly. Famous for tolerance, freedom, and liberties, some flock to gorgeous Amsterdam for the hedonistic. Wild nightlife mixes with a famously liberal attitude regarding marijuana and legal prostitution, creating a small pocket of the city center that’s often overrun with stag parties, red-light district tours, and detritus from a night on the town.

But outshining everything is this city’s beautiful soul. A sense of timelessness can be felt in the cozy bars, the warm and inviting restaurants, and welcoming locals. Enduring, beautiful, and creative, Amsterdam will charm and seduce you in equal measure, and an Amsterdam self-guided walking tour is the best way to experience it all.

On a continent filled with ancient settlements, Amsterdam is surprisingly young. Founded as a fishing village, it was only around the 13th century when Amsterdam came to be. The settlement officially began after fishermen built a bridge across the waterway. The natural harbor started to flourish, and trade began to pour in through the canals. From humble beginnings, Amsterdam would quickly develop into one of the more important cities in the Netherlands.

Towards the end of the 16th century, Amsterdam was bursting with life. Riches and wealth were flowing through the city’s canals, and the characteristic Amsterdam cityscape that we see today began to develop. By the 17th century, the city became the center of the world’s economy. Dutch ships explored the furthest corners of the earth, bringing back exotic wares, spices, and silks.

A Fall From Grace

It all ended in 1672 when the neighboring countries attacked. The small nation had become richer than England, France, and the two German states combined. Punishing and bullying their small neighbor, Amsterdam would lose much of its power and wealth. It was further weakened when Napoleon and the French invaded in 1795, staying in the city for 20 years.

But it was another force that left an undeniable mark on this city: Nazi Germany. Invading in 1940, it was in the following five years that the Netherlands would lose more Jewish citizens per capita than any other Nazi-occupied nation. This heartbreaking part of history is explored at the somber Anne Frank Museum. In this small space, this young German Jewish citizen hid with her family for two years in silence before being captured and sent to a concentration camp.

There are even more personal stories of Jewish life and Dutch resistance on our Historical Amsterdam walking tour, which delves into the Amsterdam Jewish Quarter. The tour can also be done as an Amsterdam virtual tour, letting you explore the streets and sights from the comfort of home.

Where to Stay in Amsterdam

With so many people clamoring to visit this wonderful city, it can be hard to choose where to stay in Amsterdam.

The 5 Best Neighborhoods to Stay in Amsterdam

Centrum is the city center of Amsterdam, right in the thick of all the action. For those who don’t mind the crowds, this is probably where you’ll be spending most of your time in the city. However, prices can be high, and the sheer amount of people overwhelming. But if you only have one day in Amsterdam, this is a great choice, as this is where our guided tours of Amsterdam begin.

For a more relaxed village feel, Jordaan is one of the city’s coolest neighborhoods. With an authentic inner-city urban vibe, it’s well connected to Centrum but also far enough away that you can avoid the crowds. Hip restaurants, vintage stores, and loads of live music mean that you’ll have plenty of fun here. Prices are slightly more affordable than the city center.

Westerpark is a fantastic neighborhood to stay for first-timers in Amsterdam. It’s within easy walking distance of the city’s attractions and nightlife, but far away enough that you won’t have to fight through crowds to get to your hotel. A fantastic range of accommodation caters to every budget, and there’s also plenty of shops and restaurants to choose from as well.

If you’re traveling with family, then Plantage is the neighborhood for you. It’s about a 20-minute walk from Amsterdam’s center, but the quiet residential neighborhood is connected to the center with metro and buses. Important and historic attractions are nearby, and the leafy and quiet area is perfectly relaxing.

Budget travelers would do well to stay in Oud Zuid, south of the city center. This sprawling area covers several different neighborhoods, but you can generally expect world-class museums, beautiful parks, and plenty of great places to eat and drink. Prices are great for the location.

What to Eat in Amsterdam?

The 5 Must-Try Foods in Amsterdam 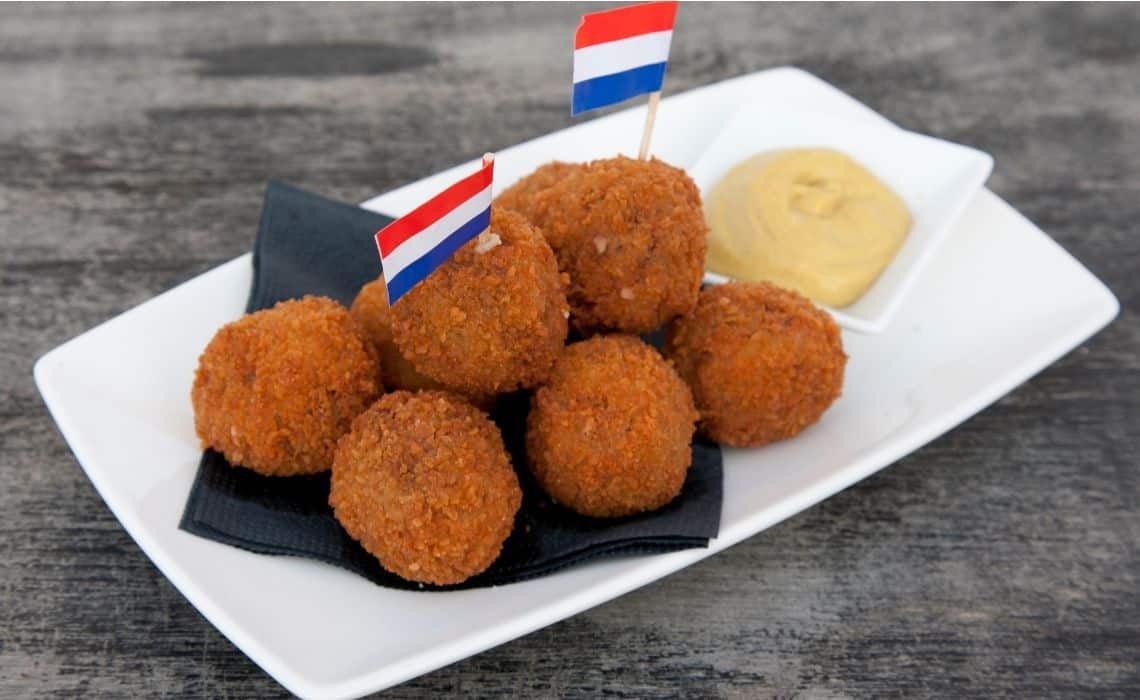 For the perfect bar treat, order yourself a plate of bitterballen in a local pub. These are ultimate bar snacks: crispy, fried meatballs accompanied with a hot mustard. You’ll easily wolf down a whole plate before you know it.

Another not-so-healthy treat to enjoy is patatje oorlog. This dish is a plate (or cone) of french fries smothered in mayonnaise, onions, and a spicy peanut sauce. The results might surprise you – this is a surprisingly delicious treat, the perfect reward for completing an Amsterdam walking tour.

As a historic fishing settlement, it’s only fitting to sample some herring while you’re in Amsterdam. The most popular way is in a herring sandwich, sold at street food stalls all over the city. You can also buy it by itself.

Cheese in the Netherlands is serious business. Across Amsterdam, you’ll find countless cheese shops selling the best of the region’s produce. The most famous exports are Gouda and Edam, but there’s a whole supporting cast to sample as well (not to mention the cheese tasting tours).

Finally, one of the most popular dishes for dessert is apple pie. In the Netherlands, this comforting treat is loaded with cinnamon and served with lashings of cream. It’s the perfect way to cap off a fine meal in one of Amsterdam’s restaurants.

Receiving over 14 million visitors every year, Amsterdam is a city that is struggling under the weight of its popularity. The city has now stopped advertising itself in global markets and is doing its best to encourage tourists to spread out their visits, stay for longer, and come for the culture instead of the beer. As tourists, we must be especially considerate of the impact our visits can have on a destination. Luckily, there are a few ways to enjoy this alluring city without contributing to the problem.

How to Be a Responsible Tourist in Amsterdam:

The Cozy Feeling of Gezellig

Denmark has its hygge and Sweden its mys, but in the Netherlands, it’s all about the feeling of gezellig. This word encompasses everything from coziness to relaxation, from fun to heartwarming. You’ll feel it as you snuggle up in a cozy candlelit restaurant, enjoy a beer in one of the warm and traditional bruin cafés, or explore the city lanes on a quiet morning as the city still slumbers. It’s the perfect feeling to cultivate after a self-guided walking tour of Amsterdam.

By Spoke and Pedal 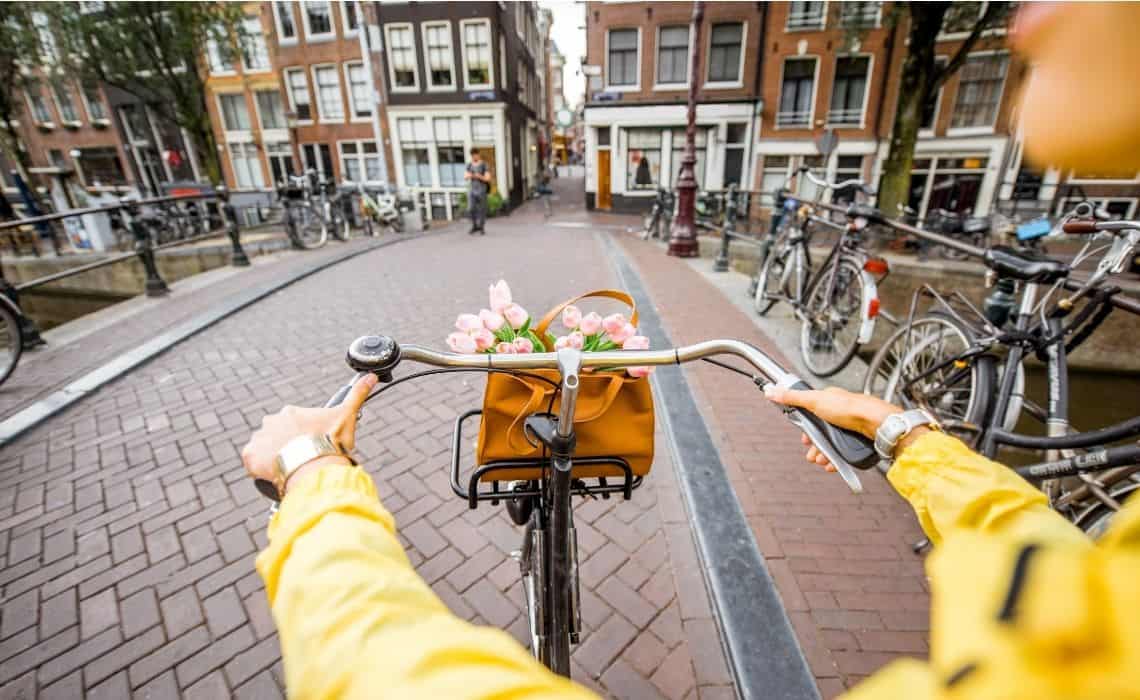 There are no two ways around it: Amsterdam is a cyclists’ city. With over 320 miles of dedicated cycling lanes, jumping on a set of wheels is a great way to get around this city and explore. Rush hour in the city center can be unforgiving, so it might be best to start somewhere a bit quieter to get the hang of things.

This is a city with it all. Our Amsterdam self-guided walking tour below will help you get to the heart of the Dutch capital’s fascinating history and culture, all while revealing this city’s best-kept secrets. 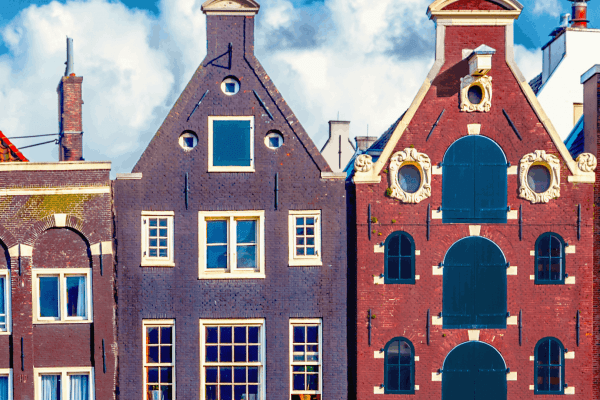 Our walking tour will take you back in time, to Nazi occupied Amsterdam during the Second World War. Not only will we visit famous landmarks such as the Anne Frank House and the National Monument on Dam Square, but we’ll…