Find out everything you need to know about this enchanting medieval city before discovering its beauty on a walking tour of Bruges.

As one of the most perfectly preserved Medieval cities in Europe, Bruges is seemingly lifted straight out of a fairy tale. With enchanted cobbled lanes, stunning city squares, and a series of romantic canals, visiting here sends you hurtling back into the past.

And the best way to experience it all? A walking tour of Bruges. This city is compact and entirely walkable, making it easy to discover all the sights.

But it’s not just the main attractions that make this city so enticing. Designated as a UNESCO World Heritage Site, stunning architecture hides around every corner. On the central canals, beautiful merchant houses have been preserved from the 15th century, while earlier Gothic architecture can be seen in the city’s soaring churches and towers. Elsewhere, neat rows of almshouses bring even more charm to this magical destination.

As you walk through the city, you’ll quickly gain an appreciation of just how much historic wealth is on show. Bruges was the home for the Flemish elite, wealthy aristocrats who flocked to the city as it became one of Europe’s greatest centers of trade. Beside them, the Flemish Primitives, painters who embraced a never-before-seen realism in their oil paintings of the wealthy clients. Today, one of the world’s finest collections of Flemish Primitive works is contained in the Groenigemuseum, a highlight of any visit.

Even more travelers are drawn to this enchanting city for another reason: chocolate. Flowing through the cobbled streets, this historic treat is strictly controlled through a regulating body, ensuring it remains among the world’s best. It’s a perfect treat to cap off any visit to this fairy tale city.

A Center of Trade

Thanks to its fantastic connections to the northern sea, Bruges started as a trading outpost in the early 2nd century AD. It would continue to grow in importance, with trade flowing from mainland Europe through the rivers towards the Northern Sea. Thanks to early Roman fortifications, the settlement even survived Viking raids in the 9th century; the Scandinavians decided to trade with the city instead. So, Bruges continued to grow its wealth.

With trade flowing through its streets, the Hanseatic League quickly took notice. The economic powerhouse was established as a Kontor between the 12th and 15th centuries, bringing even more trade through the town. It was quickly becoming one of Europe’s most important centers, and traders flocked to the city. Merchant houses from the time can still be seen in Bruges today.

But it was the 15th century when Bruges enjoyed a long period of wealth when the Dukes of Burgundy officially made Bruges their main residence. This paved the way for a huge influx of art and architecture; the Flemish Primitives created some of the world’s most renowned artworks in the city during this time. But it wouldn’t last long; the Dukes of Burgundy left in 1482, and the rise of neighboring Antwerp would begin diverting most of the trade away from Bruges.

Slowly, the city became a bit of a backwater, although art and architecture continued to thrive for a while even after the wealth had left. Between the 16th and 19th centuries, Bruges would become one of Belgium’s poorest cities. That would all change again in the 20th century, with the advent of mainstream tourism. Here was a perfectly preserved medieval city, with remarkable sights and interesting history. Today, it’s one of Europe’s most popular destinations.

Thanks to its compact size, exploring Bruges on foot is a pleasure. For an in-depth look at this city’s history, check out our Bruges walking tour below. It can be done both on the ground in Belgium or online, depositing you in Bruges for a day from the comfort of your home.

Where to Stay in Bruges

The 5 Best Neighborhoods to Stay in Bruges

For first-time visitors to Bruges, there’s no better place to stay than in the City Center. This is the most charming part of the city, where cobbled alleys hide away fabled architecture and all the historical landmarks. As such, it’s also the busiest. Prices are a bit more expensive than other areas, but a wide range of accommodation options help meet all budgets.

Home to most of the city’s historical sites, it’s also in the center where our Bruge walking tour takes place, Essential Bruges.

For foodie travelers looking to feast on local cuisine, you’d do well to stay in Sint-Gillis. This hip neighborhood is within easy walking distance of the center, beginning north of Bruges Market Square. Filled with local restaurants, eateries, bistros, and cafés, you won’t go hungry here. It’s also far more peaceful than the center.

Next up is the Magdalena Quarter, a large and residential area south of the city center. This area is great for families, filled with parks and playgrounds. There’s also a whole host of amazing museums to check out in the area as well. Prices are affordable, and the atmosphere is quiet and relaxed.

The Sint-Anna Quarter is an authentic, working-class neighborhood to the east of the city center. Filled with tiny, cobbled streets and beautiful architecture, it has a distinctive village vibe while also being more relaxed on the tourism front. This is also where you’ll find the best nightlife in the city.

Finally, the Ezelstraat Quarter is best for budget-minded travelers looking for a bargain stay. Northwest of the city center, this neighborhood is a fun-filled location not far from all the action. Don’t forget to check out Ezelstraat Street, an 800-year-old laneway that is now one of the city’s trendiest spots with loads of boutique stores.

What to Eat in Bruges? 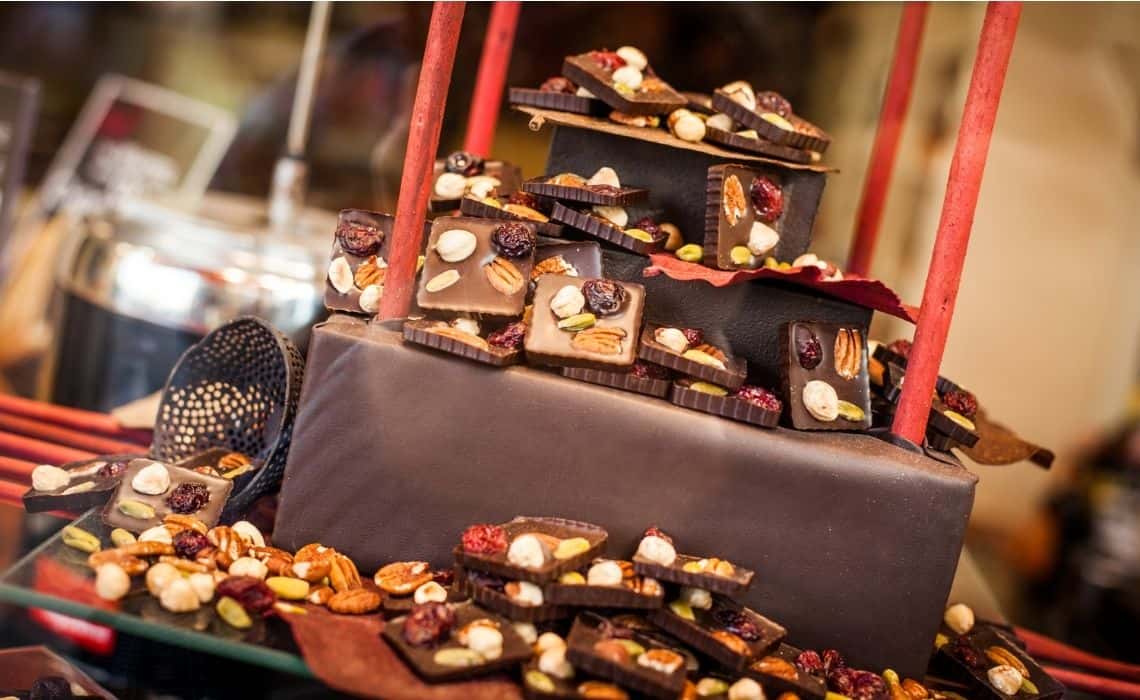 Bruges has quietly turned into a gastronomic powerhouse in Europe. Expect Michelin star restaurants to rub shoulders with more traditional Belgian taverns. In Bruges, anything and everything is possible.

5 Things to Eat in Bruges

Belgium goes mad over its frites, an absolute must-try food when you’re in Bruges. These fries are double-fried for extra crispiness and can be found everywhere in the city. Loaded with sauces of your choice, it’s an unhealthy but oh-so-good treat to enjoy after a Bruges self-guided walking tour.

Another great food to try when in Bruges is the city’s waffles. This is a national classic, with soft and fluffy waffles melting in your mouth alongside chocolate, whipped cream, and some fresh fruit. A truly perfect dessert to enjoy while perched in a city square, admiring the architecture.

One of Belgium’s biggest exports is chocolate, so it goes without saying that you should sample some straight from the source. The creation of chocolate goes all the way back to the 17th century, and today is still strictly controlled by regulating bodies to ensure the highest quality. You’ll pass hundreds of chocolate shops as you explore this beautiful city, so why not indulge just a little?

Carbonade Flamande is a delicious and comforting beef stew, slow-cooked in beer. This is a historic dish from the region with roots in the Middle Ages. Today, restaurants have taken the traditional recipe and spiced it up with modern flair; expect various versions at each restaurant you encounter. Wherever you eat it, it’s a warm and hearty meal.

Finally, another comforting stew is the Belgian waterzooi. This creamy soup originated from Ghent and contains large bits of leek, potato, onion, and carrot. Today, it’s topped off with tender pieces of chicken. However, thanks to its location by the sea, in Bruges, it’s traditionally served with fish instead. You’ll find both versions in restaurants throughout the city.

One of the best times of the year to visit Bruges is in the Spring when a blaze of white and yellow flowers comes to life. To see this ocean of flowers, visit the convent garden inside the Beguinage Ten Wijngaarde, the beguine’s historic home, now a museum. Stepping into the convent garden reveals a tranquil space filled with beautiful flowers.

A trip to Bruges isn’t complete without sampling some of its finest drink: beer.  During the golden age of the 15th century, there were no fewer than 54 breweries at work in the city. Today, historic brewers sit side by side with sports bars and traditional pubs, each with free-flowing Belgian beers. This is one of the great beer capitals of Europe, so imbibe while you can.

The 5 Best Beer Bars in Bruges 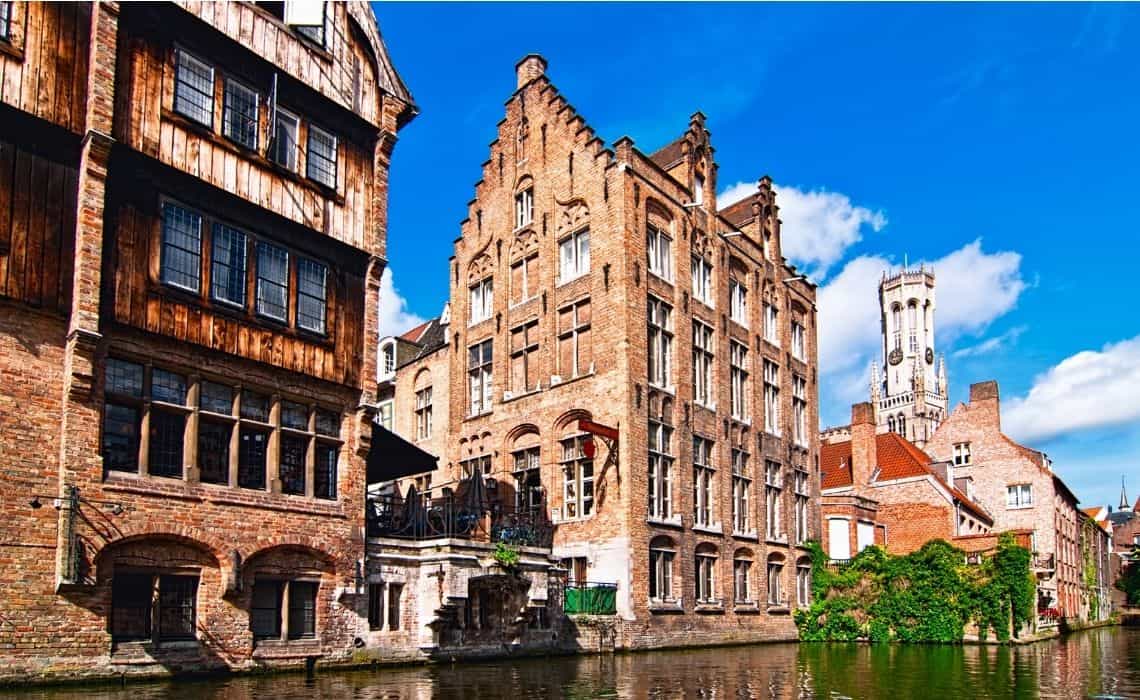 One of the best ways to enjoy a trip to Bruges is to explore via the canals. Hopping on a boat tour lets you admire the city’s beautiful historic core from a unique vantage point, bringing out another beautiful side to the architecture. This is a classic thing to do when you’re visiting Bruges, and although it’s a bit touristy, it’s also totally worth it.

Alluring and beautiful, Bruges is one of Europe’s most charming cities. But don’t take our word for it – why not discover it for yourself? Our walking tour of Bruges below takes in the absolute best of this charming city. 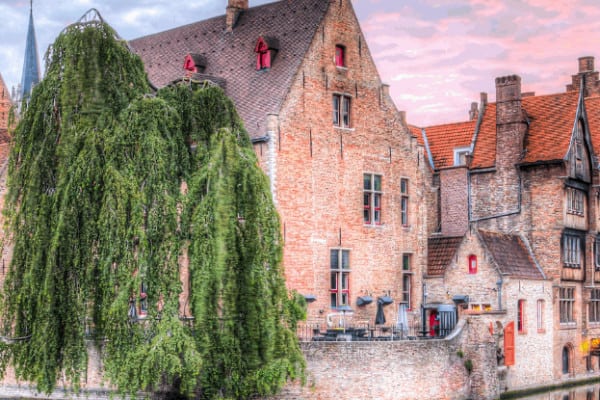 Wending through the warren of streets and canals in the center of Bruges, our tour will bring to life the illustrious history of this medieval metropolis. First a thriving trading center in the 1200s before becoming the favored residence of…