A Prague self-guided walking tour is the best way to discover this enchanting capital city, one of Eastern Europe’s gems.

Beautiful, historic, and filled with the best beer in the world, Prague is one of Europe’s most divine cities. It’s easy to fall in love with this enchanting destination, which rivals the beauty of Paris, Florence, or Edinburgh. One of the best ways to appreciate all that grace is with a Prague self-guided walking tour.

The city’s well-preserved old town is a fascinating web of cobbled streets, twists and turns to hide away picturesque stone courtyards, and more than a few mysteries. With most of the city’s most famous landmarks found here, this area will undoubtedly be at the center of any trip to Prague.

Another highlight is the imposing Prague Castle, sitting atop a hill on the other side of the Vltava River, lazily cutting through the city center. Dating back to the 9th century, history buffs will love exploring every inch of this ancient fortification.

Modern-day travelers will have plenty to keep them busy as well. Aside from the lively culture and nightlife, Prague is also home to the world’s best beer. Birthplace of the famed Pilsner Urquell in 1842, this country has been producing some of the world’s greatest beers for an age now.

Thanks to a budding tourism industry (the city routinely sees more than 8 million people a year), Prague is emerging as one of the greatest capital cities in Eastern Europe. And discovering it all is made easy with our Essential Prague Walking Tour.

The History of Prague

Like many European cities, Prague got its start thanks to its ancient castle, one of the world’s largest. Believed to have been founded around 880 by Duke Bořivoj of Bohemia, it has been the star attraction of the city over the centuries. Traders were drawn to the castle, and eventually, a population settled on the banks of the river below – the very beginnings of the city.

Today, Prague Castle still overlooks this enchanting capital. For those after an in-depth look at its history, our walking tour of Prague Castle is the perfect option.

From the fledgling settlement, Prague quickly became one of the busiest centers of trade in Europe. Continuing to grow, it bloomed during the 14th century as it came under the rule of the Holy Roman Emperor, John of Luxembourg. In 1355 the city became the capital of the Holy Roman Empire, enjoying the status as one of the largest and wealthiest cities on the continent.

Through revolutions, wars, and occupations, Prague arrived in the 20th century. After the fall of the Austro-Hungarian Empire in 1918, the city became the capital of independent Czechoslovakia. WWII saw it occupied by Nazi Germany, after which it was enveloped by communism and the Soviet Union.

The 1989 Velvet Revolution would end communism in the country, acting as a catalyst for the split of Czechoslovakia into two independent countries. Since then, the Czech Republic has joined the European Union and has become a wildly popular city to visit for its unique culture and fascinating story.

The history runs deep in Prague, offering a fascinating look at one of Europe’s most interesting cities. Discovering it all on one of our tours is easy. All the tours can be done either on the ground or from the comfort of your own home with our Prague virtual tour.

Where to Stay in Prague

The 5 Best Neighborhoods in Prague

The most popular area to stay in Prague is in Staré Město, otherwise known as Prague’s Old Town. Loaded with historical sights and the beautiful fairytale streets the city is known for, first-timers to Prague will usually choose this as their base of explorations. As Prague’s most popular location, prices here are higher than in the rest of the city.

The Jewish Quarter in Prague is also found in this neighborhood, known locally as Josefov. This fascinating area of the city is explored in-depth in our Jewish Quarter Walking Tour.

Nové Město is the city’s New Town, perfect for those who want a central location but a bit quieter than the bustling Old Town. Despite the name, this neighborhood is, in fact, over 700 years old. But that doesn’t stop this area from being known for great shopping and luxury hotels.

Wandering across the famed Charles Bridge brings you to the neighborhood Malá Strana. Historic and charming cobbled streets curve all the way up to the imposing Prague Castle, offering unrivaled views over the city. While busy during the day, it’s very peaceful at night, making it a great spot for families.

One of the coolest places to stay in Prague is in Vinohrady, a leafy residential district southeast of the city center. Known for its trendy cafés, cool bars, and a sprawling park, it’s a great neighborhood to stay in if you’re looking for somewhere a little bit off the beaten track. Prices are far cheaper here than in the city center as well.

Finally, for a glimpse of local life, you’ll want to stay in the Žižkov neighborhood. There are plenty of pubs here that make it a mecca for nightlife, but thanks to its location outside the city center, accommodation is nice and affordable.

What to Eat in Prague?

5 Must Try Foods in Prague

One of the most famous dishes in Prague is Svíčková, or braised beef. The slow-cooked beef is smothered in a creamy vegetable sauce, served with delicious bread dumplings. It’s a classic dish with a recipe that changes from family to family. 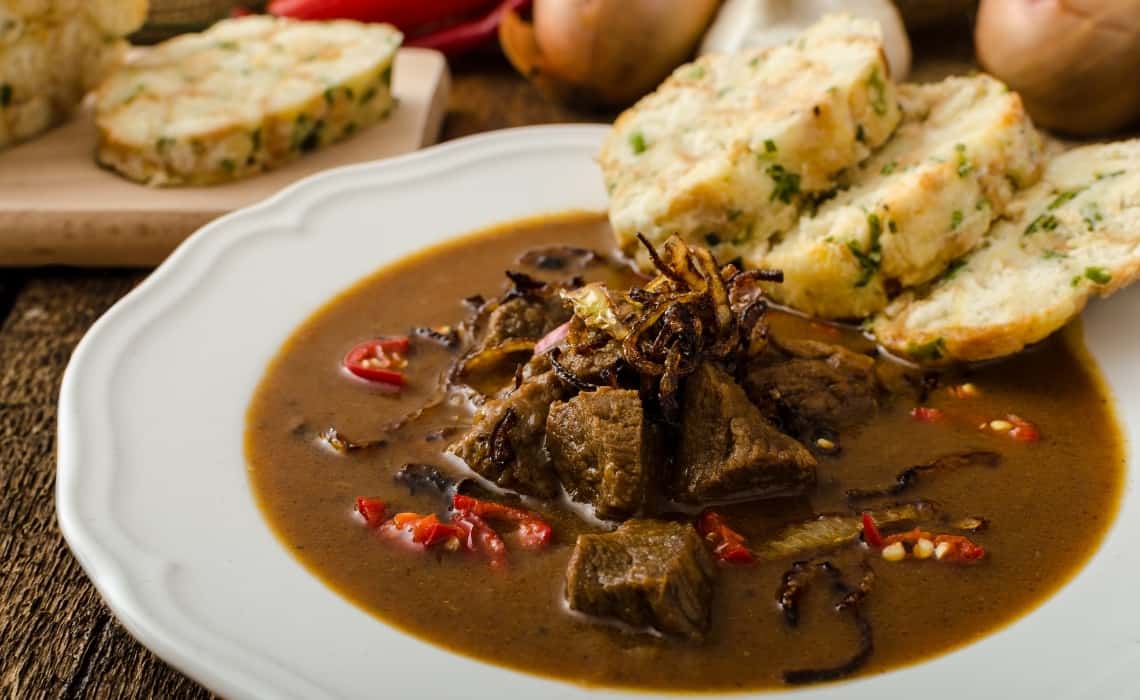 Like many other countries in the area, Czech Republic is a fantastic place to try some goulash. It’s thicker than its Hungarian counterpart, with more meat and fewer vegetables—the perfect way to recharge after your walking tour of Prague.

Cheese lovers need not look any further than smažený sýr, or deep-fried cheese. You’ll be able to track it down in most places, from classy restaurants to dingy pubs to street vendors. It’s a popular and delicious staple.

If you’ve got a sweet tooth, then sampling palačinky is a must. Like French crepes but with a different preparation and cooking method, these fluffy pancakes are usually rolled up and stuffed with fillings like jam, fruit, and cream. Savory options are also available with fillings like meat and cheese.

While not a food, it’s still novel to try kofola when you’re visiting Prague. During the communism years, there was no Coca-Cola imported into the country, so they had to make their own. Still popular today, this fizzy drink is less sweet than Coke but with quite a bit more caffeine.

Such a rich culture and history in Prague, of course, means there’s a wealth of experiences waiting to be discovered. Here are a few extra things to do in Prague.

Birthplace of the pilsner beer, beer tourism in Prague is big business. But there’s one unique way to enjoy the hops that you won’t find in many other countries, and that’s a beer spa. Soaking in the suds is a relaxing way to wind down after your Prague walking tour.

You won’t be bathing in pure pilsner, though. Instead, it’s a mix of hops, yeast, and hot water. The treatment is said to offer health benefits such as improving blood circulation in your body, keeping your skin hydrated, and even reducing stress. And don’t worry, you won’t have to drink the bathwater to quench your thirst. Next to each tub is a private beer tap, from which you can enjoy unlimited beer. 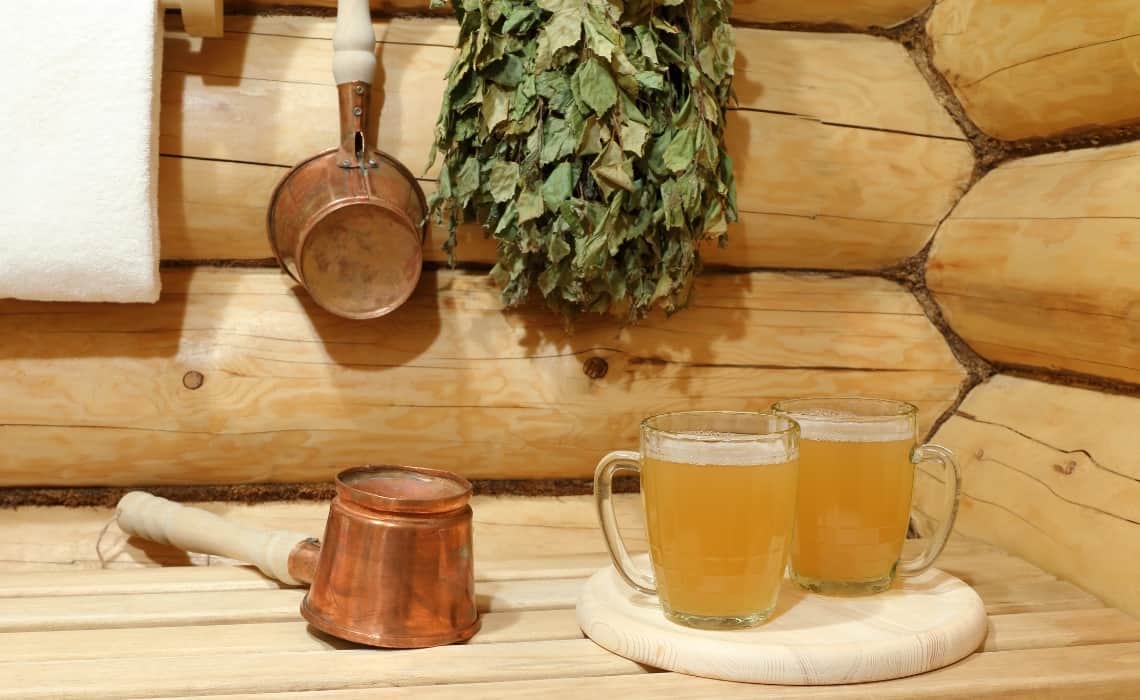 The Best Beer Spas in Prague

Another quirk of tourism in Prague is the city’s wealth of dark tourism attractions attached to its time as part of the Soviet Union. Once you’ve had your fill of the old town, discovering the city’s grittier side can be a real thrill. Whether you visit the former KGB headquarters to check out some torture weapons or delve underground into one of the city’s bomb shelters, there are many relics from the age of communism and revolution in the city.

One look at Prague’s Old Town and you’ll quickly forget about renting a bicycle in the city. However, one of the best ways to appreciate the winding Vltava River is on two wheels. Snaking away in either direction, you can quickly leave the city behind and discover a slower, more rural way of life in the outer suburbs and countryside. Longer day trips can turn up ancient castles, picturesque villages, and glimpses of local life in Czech Republic.

As you can see, there’s a lot to discover in wonderful Prague. With an irresistibly beautiful cityscape and fascinating history, we’re sure you’ll fall in love as well. For a Prague self-guided walking tour, check out our different options below. 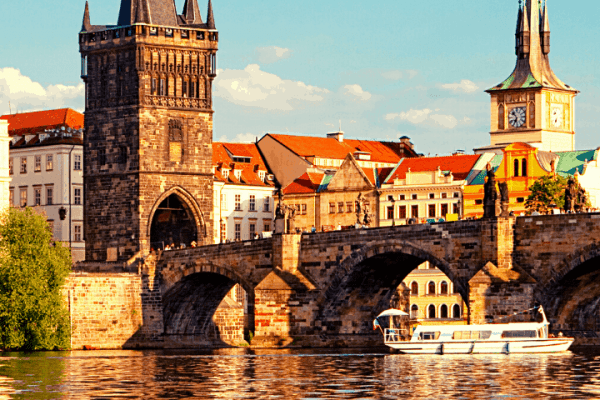 On our Essential Prague tour, you will experience the best of Prague’s ancient past and its quirky, modern present – everything from a clock that was accurately tracking celestial bodies in the early 1400s, to a modern, graffiti-covered wall. 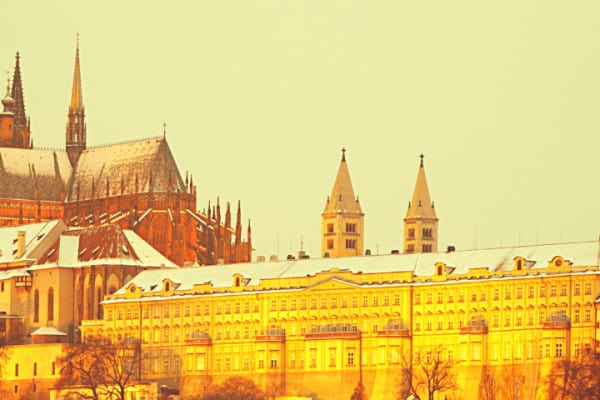 Welcome to our tour of what the good folks at Guinness World Record call the world’s largest castle complex. From an ancient monastery to tales of a moat-dwelling werewolf and the severed tongue of a saint, this is your insider's… 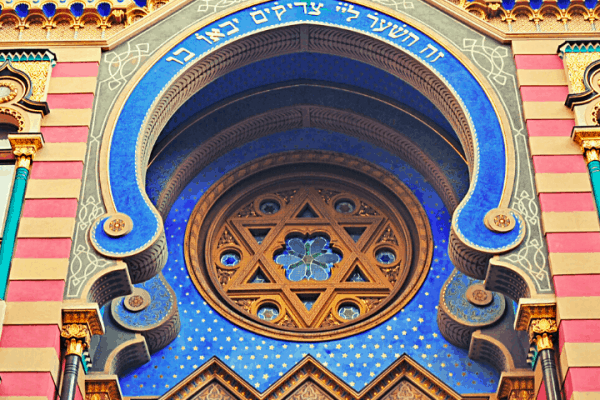 For more than 700 years, Prague’s Jewish Quarter – once known as the ghetto – has existed as part of the city’s historic Old Town. In that time, the ghetto has witnessed everything from massive fires to legends of anthropomorphic…