Paris is one of the world’s most enticing destinations. Haven’t we all imagined ourselves strolling down to the corner store bakery, wining and dining at a chic bistro, and admiring the sights in the marvelous golden hour? For a lot of people, Paris is the stuff of dreams – and we mean a lot. With around 17-18 million visitors each year, this is the most popular destination in Europe.

It’s easy to see why. From the Eiffel Tower to Notre Dame Cathedral to the Louvre Museum, Parisian landmarks are some of the most recognizable in the world. Not only that, but the French capital achieves an effortless grace and beauty other destinations can only dream of. Ornate bridges span the River Seine, connecting two sides of the city as it spirals out in every direction along handsome boulevards punctuated by leafy parks.

Paris is arguably the epicenter of art, architecture, and fashion in Europe as well. World-class galleries house masterpieces, daring and modern buildings sit side by side with ornate Parisian mansions, and local fashion labels are known the world over. When the golden hour casts its magic over the city in the afternoon, you’ll quickly realize why this city is a well of inspiration for the creatives.

Food too finds its home in the Parisian streets. Home to the original haute cuisine, chefs from around the world still strive to do a stint in one of the city’s restaurants, learning the classic techniques from the world’s best chefs. The only hard work visitors will have to do is choose where to dine. With a wealth of Michelin-starred establishments and cozy corner bistros pushing the boundaries of modern food, there’s plenty to discover, sample, and fall in love with.  To mention nothing of the baguettes, cheese, pastries, and wine – all of which are sublime.

Whether you’re an old-world romantic, fashionista, history lover, or foodie, Paris is the destination. Self guided walking tours in Paris are an easy way to discover the story of the City of Light.

Paris has a long and fascinating story – to discover it in-depth, we recommend our one day walking tour of Paris focusing on its history.

Paris was first settled around the year 259 BC by a Celtic tribe known as the Parisii. The area was quickly conquered by the Romans in 52 BC, renaming the village Lutetia. Around the 4th century, the name changed to Paris for the first time and slowly grew and expanded. During the 11th century, riches began to pour into the city via traders and pilgrims, thanks to its ideal location.

Paris has a long history of revolting against the Monarchy and upper class – something that is still present in its culture today. From the merchant revolt of the 14th century to an uprising in the 17th century protesting the terrible poverty, Paris is built on revolution. The most famous is, of course, the French Revolution, which began in the late 18th century.

With a growing population and poor management of social and economic conditions, and the Enlightenment focusing on equality and social freedoms, France was primed for a revolution. Increasing tensions between the three French Estates (the clergy, noble class, and commoners) fueled the beginning of the revolution, officially kicking off when commoners stormed the Bastille in Paris on the 14th of July 1789. The results of this revolution forever changed the political and social structures of Paris, France and even reverberated around other European countries.

Paris, too has its history with Nazi Germany. At the beginning of World War II, the Nazis swept into France, defeating its armies and taking control of Paris within just seven weeks. The city would remain under Nazi occupation for four years, although the French didn’t give up; their strong fighting spirit fueled a disruptive underground resistance throughout the war. Thanks to their strong uprising in 1944, it turned the Allied forces around to liberate Paris after originally planning to continue chasing the Nazis across France and rescue the city later.

We’ve barely scratched the surface of this storied city – there’s still a wealth of history to discover. To connect the dots and even further, our walking tours of Paris below both provide the context of the city’s sights, historic monuments, and culture. They can also be done as a virtual tour of Paris, letting you discover the city from the comfort of home.

Where to Stay in Paris

The 5 Best Neighborhoods to Stay in Paris 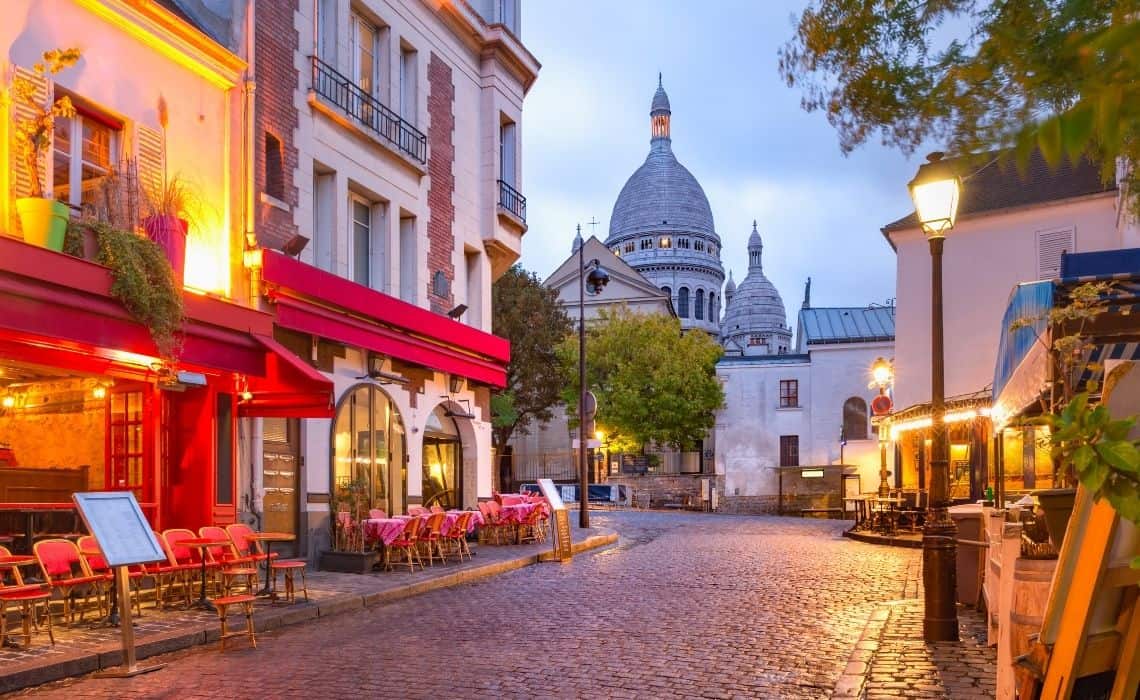 Easily one of the most charming neighborhoods in the entire city, Montmartre is a great choice as a base for explorations around Paris. Although it’s located a bit far from the city’s famed attractions, it’s easily connected with the center via metro. This neighborhood is known for its retro bistros and cafés, cobbled streets lined with romantic Parisian houses, and leafy green areas with great views over the city.

Saint-Germain-des-Prés is a classic and upscale area of Paris. As such, prices can be quite high, but the location is worth the extra cost alone. Minutes away is the Notre Dame Cathedral, while crossing the Seine River brings you immediately to the Louvre Museum, the starting point of our Essential Paris walking tour.

For those after a healthy dose of Parisian romance, the Marais is a fantastic choice. Sitting opposite the Notre Dame Cathedral on the right bank of the Seine, the grand architecture and aristocratic mansions that populate this area have come to embody the image of Paris. It’s also home to some of the best nightlife in the city. Prices can be expensive, but the area is worth it.

South Pigalle, known locally as ‘So-Pi,’ is one of Paris’ up-and-coming areas. Quiet tree-lined streets are packed with trendy boutiques, clandestine cocktail bars, and fashionable bistros. Prices are more affordable here than around the center.

Finally, the 7th Arrondissement is another fantastic location to stay in Paris. From here, your city of lights dreams can come true. Home to the Eiffel tower, graceful architecture, the Seine, and world-class museums, it’s a popular choice for everyone, no matter what kind of traveler you are.

What to Eat in Paris?

In the home of classic cooking, the humble baguette remains a vital part of French culture. We’ve all pictured ourselves strolling down to the corner boulangerie and picking up a freshly baked loaf before retreating to a leafy park to enjoy it with some wine and cheese. There’s something in the bread in Paris. 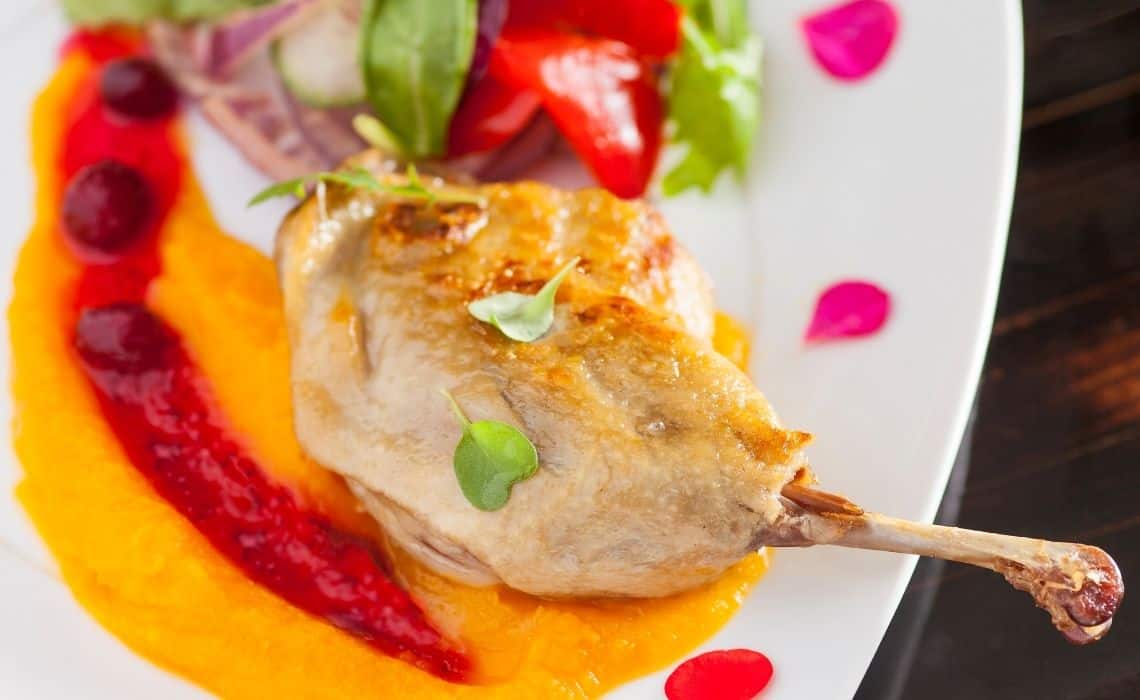 A classic dish that you’ll find on almost every restaurant menu across the city is duck confit or confit de canard. Soft, silky, and tender, this dish is made up of a duck leg cured overnight in salt, garlic, and often thyme as well. When it’s ready to be cooked, chefs plunge it into a deep dish filled with duck fat, slowly cooking at low temperatures until ready.

Croissants have been at the heart of a French breakfast for hundreds of years and still show no signs of slowing down. Like baguettes, croissants are just so much better in Paris than elsewhere. Buttery, flaky, and fresh, there’s no better way to start a day in Paris than with a delicious croissant.

Escargot, or snails, is a French dish that visitors are often keen to try on their first visit to the country. Tracking some down in Paris is an easy job, but there are two varieties. Escargots de Bourgogne are more expensive, with striped yellow and brown meat. The less expensive variety is Escargots Chagrine. The most popular way to prepare them is by baking them in a delicious garlic-herb butter.

Finally, the perfect treat for when you’ve finished a walking tour is a macaron. This is made from a meringue-like shell, made into a small sandwich with a delicious ganache or buttercream filling. If you’re opting for virtual tours of Paris, enjoying them while exploring via the app is also a fantastic choice.

Banks of the River Seine

To feel like a local, you should spend some time enjoying life on the banks of the River Seine – or the Berges de Seine. This area between the Eiffel Tower and the Louvre has been completely pedestrianized, with ping pong tables, free yoga classes, and even renovated cargo crates that can be reserved for some quiet time. Takeaway restaurants and cafés also provide plenty of food to keep you satiated as you wander and explore, reconnecting with the river.

It might not look like it now, but Paris has some serious plans to become the greenest city in Europe over the next decade. Diesel cars are due to be banned in the city from 2024, with petrol cars to follow by 2030. Sprawling urban forests are planned in front of some of the city’s attractions, such as the Hotel de Ville and Opera Garnier. 50% of France’s capital is set to be covered by trees by 2030 as well. It’s an enticing vision for an already stunning city. 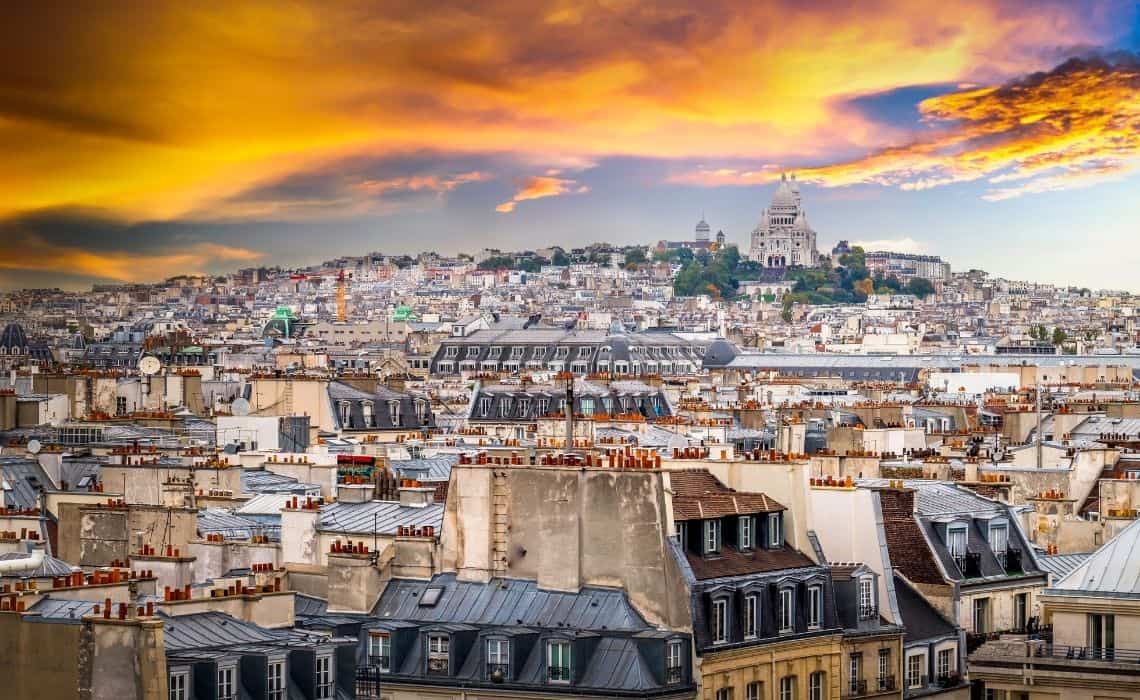 There’s nothing quite like the Parisian skyline. Watching as the Eiffel Tower lights up at night or as the silhouette of Notre Dame glows in front of a fiery sunset is magic and the perfect way to cap off one of our Paris walking tours in English.

To drink in the views over the city of light, check out one of the following viewpoints across the city.

The 5 Best Panoramic Views of Paris

To discover more about Paris, check out our self guided walking tours Paris below. 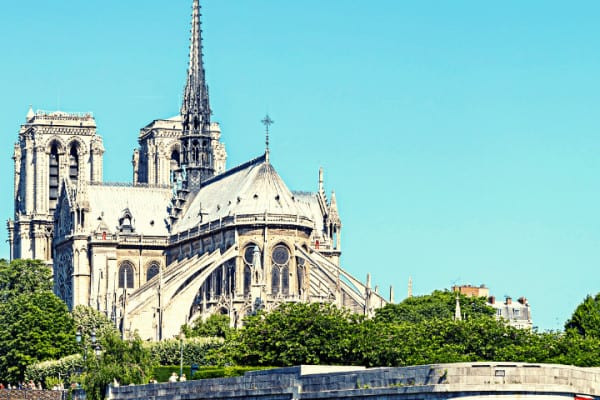 The History of Paris

Our tour will delve into stories about Queens, Kings, Saints, scholars and revolutionaries. We'll follow the history of Paris from its beginning as a Roman village called Lutecia. You will go from the French capital’s most famous sites such as… 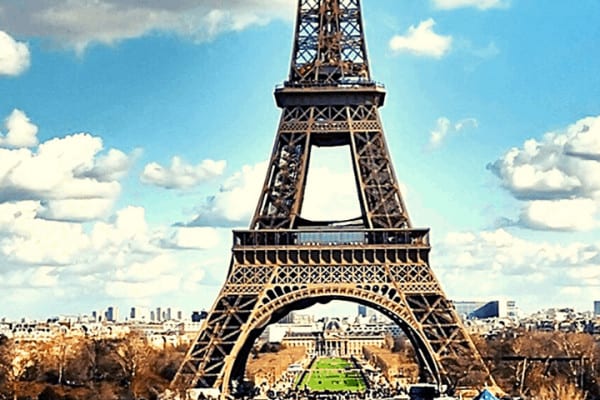 On our Essential Paris tour, we'll hear stories about striking architecture, unforgettable historical characters and the history behind the city. We'll visit royal palaces, gardens, and revolutionary and military sites. You will explore everything from the French capital’s most famous…