Our Berlin Self Guided Walking Tour is one of the best ways to learn about this vibrant, grungy, and fascinating city in Germany.

Berlin is one of Europe’s most fascinating cities. From its intense history to one of the richest clubbing experiences on the continent to its alternative and laid-back lifestyle, there’s a lot to love here. Visits to Berlin quickly turn into a deep passion for the alternative, appreciation of history and culture, and a love for a city like no other.

Steeped in history, there’s no ignoring the intense amount of influence and world events that have taken place on these streets. From Hitler to the Berlin Wall, to revolutions and devastation, empires and occupation, Berlin offers an in-your-face look at human history. It’s hard not to be moved by the events that have shaken these streets.

Shaking off its dark past as the center of Nazi Germany, Berlin is nowadays known more for being alternative, hipster, and grungy. Berlin is a city with a rebellious soul, and there’s no doubt that this is one of Europe’s coolest capitals. The laid-back population enjoys the good life: leisurely days in the park, fine drinking and dining, and an envious work-life balance.

The pace quickens when you decide to go out – this is the European capital of nightlife. From small old-timey bars to some of the biggest (and loudest) clubs on the continent, this is a city that never sleeps – Literally. Some clubs are open 24 hours a day, seven days a week, meaning partygoers can hit the dancefloor at any time.

Are you ready to experience this trendy and hip capital city? A Berlin self guided walking tour is one of the best ways to discover the fascinating German capital, delving into its history, culture, and fascinating way of life. Welcome to Berlin.

Berlin was officially founded in the 13th century, when in 1237 merchants settled on either side of the Spree River. The two settlements were called Berlin and Cölln, well-positioned to take advantage of the trade flowing from east to west. Combining forces in 1307, the trading towns turned into one city and became a major player in the Hanseatic League in 1360. It quickly flourished into a buzzing city of traders and merchants.

During the 17th century, the Thirty Years’ War devastated the city. As it rebounded, it would grow at an astounding rate, quickly becoming one of Europe’s most beautiful and important capitals in the 18th century. Wealthy and powerful, art, science, and literature all flourished in the city’s streets. However, it would all grind to a halt in the 19th century when Napoleon invaded in 1806. After two years, they left the city again in ruins, having looted anything and everything of value.

But it was that event that set the spark for the German nationalist movement. Once again, on the road to recover its former power and wealth, Berlin would become the center of intellect, politics, and power of the movement. Intellectuals met in the cafés and salons, and then the Industrial Revolution created a boom the likes of which had never been seen. Thousands moved to the city in search of work in the factories. It was a time of protests and democratic revolutions; Germany was finally unified in the 19th century.

As the capital of Nazi Germany, Berlin was a center of attention after the end of World War II. The city was split between the Soviets, Americans, French, and English. With the Soviets and communism in the east, German citizens began to flee across the border into West Germany by the thousands, escaping to a life away from communism.

The Soviets constructed the Berlin Wall on the 12th and 13th of August 1961 – a powerful symbol of the Cold War. As Berlin awoke, the families found themselves separated on both sides of the wall. It wasn’t until 1989, with the decline of the Soviet Union, that the wall was finally torn down, and Berlin reunited 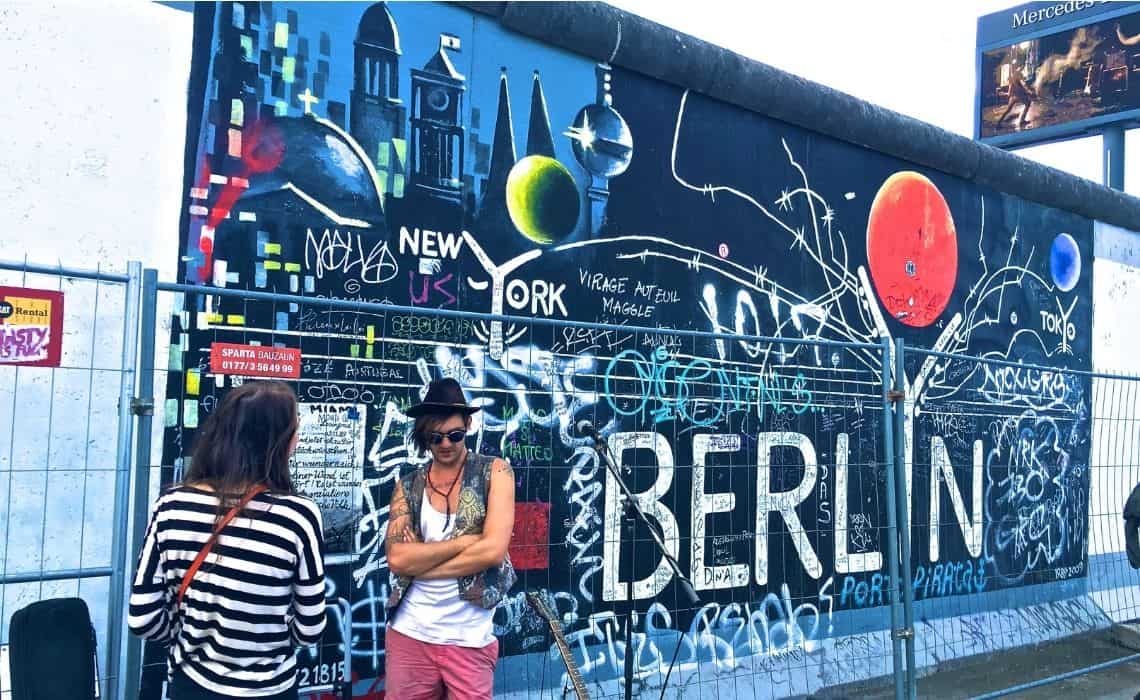 We’ve barely scratched the surface of Berlin’s long and fascinating history, skipping over revolutions, movements, and the entirety of World War I. For a more in-depth look, our self guided Berlin walking tour below will give you great insights into the heartbreaks, revolutions, and cultural shifts that have taken place in Germany’s capital. It’s also available as a Berlin virtual tour so that you can do it from the comfort of home.

Where to Stay in Berlin

Berlin is unlike other European cities. This urban sprawl is five times the size of Paris, and the layout was for so long divided by the Berlin Wall that there’s not just one main city center.

The 5 Best Neighborhoods to Stay in Berlin

For first-timers in Berlin, Mitte is the best area to stay. It’s located near many of the city’s most famous sights, like Checkpoint Charlie, Brandenburger Tor, and the Pergamon Museum. There’s also plenty of bars, great restaurants, and a decent nightlife. The area around Alexander Platz is generally considered the main center of the city.

Just south of here in Potsdamer Platz is where our Berlin tour, Essential Berlin, begins.

Kreuzberg is another excellent choice to stay in Berlin. Located further south of Mitte, this area is great if you want to experience some of the city’s fantastic nightlife. But even if you’re not a party fiend, there’s plenty to see and do here, from history museums to leafy parks.

North of Mitte is Prenzlauer Berg, one of the city’s coolest neighborhoods. Hip and bohemian, this neighborhood offers a heady mix of past and present. Restaurants, bars, design firms sit amidst pieces of history, and people from all walks of life make their home here.

For a hipster neighborhood that’s not as gentrified, Friedrichshain in former East Berlin is a great choice. There are a lot of bargain stays as well, making this great for budget travelers. Expect lots of galleries, street art, and grungy, alternative vibes.

For families traveling to Berlin, Wilmersdorf is a great neighborhood to make your base. Once its own independent town, this quiet and leafy area of the city features several family attractions. It’s a wealthy part of Berlin, so there’s a lot of grand architecture to see and impressive parks to explore.

What to Eat in Berlin? 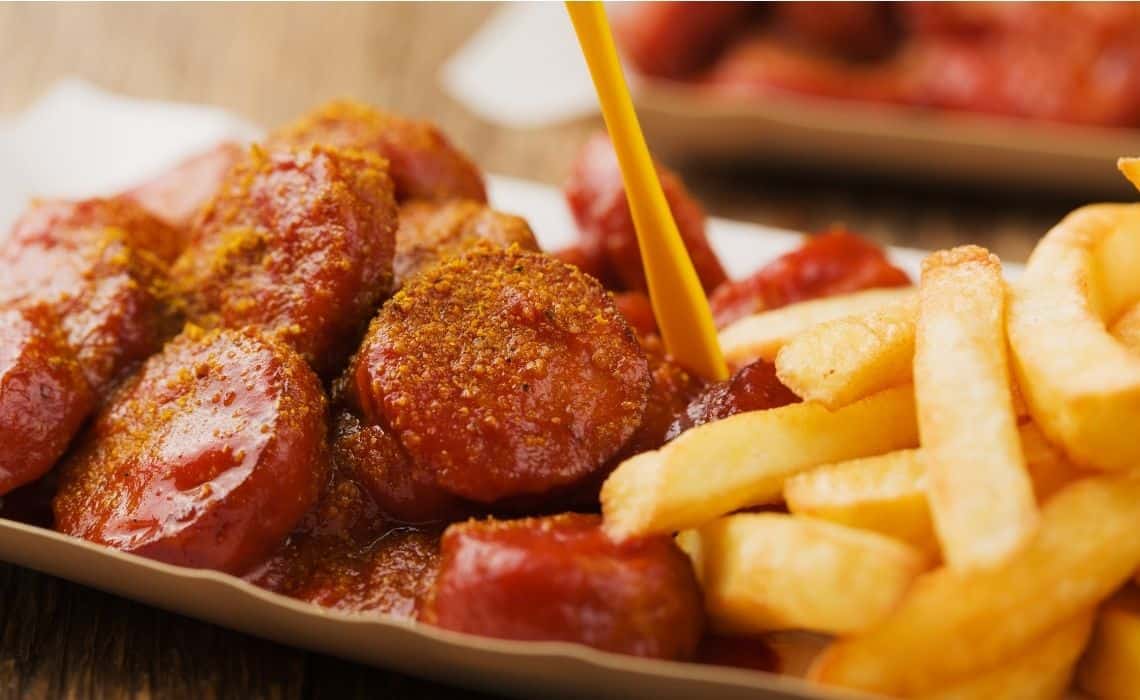 The ultimate Berlin food is the humble and delicious currywurst. Simple, cheap, and fast, it’s a great staple to top off any walking tour in Berlin. The grilled sausage is covered in a special sauce made from ketchup, Worchester sauce, and a curry powder kick.

Another classic dish in Berlin is the eisbein, or in English, pork knuckle. You’ll feel as if you’ve been thrown back into medieval times when this huge chunk of grilled meat is plopped down in front of you, usually paired with sauerkraut and potatoes. For a truly over-the-top meal, don’t forget to order a stein of beer as well.

Schnitzel is perhaps Germany’s most famous dish. A piece of veal is covered with flour, egg, and breadcrumbs and fried to crispy golden-brown perfection. You’ll also find pork and chicken schnitzels across the city, best paired with some fried potatoes, a sprig of parsley, and a dash of lemon.

Berlin sure does love its sausages, and bratwurst is another type you should try while visiting. This is the classic German BBQ food, a short and fat sausage grilled and thrown into a bun with ketchup and mustard—another delicious, affordable, and filling treat.

Although technically hailing from Turkey, Berlin does some of the best döner kebabs in the world. You’ll find kebab shops on almost every block across the city, with the huge Turkish population in Berlin serving up delicious wraps of roasted meat, salad, and sauce. It’s the perfect way to enjoy a quick bite before a tour of Berlin.

In Berlin, a wide array of open-air cinemas set up across the city to welcome the warmer months. Located in parks, old warehouses, and historic courtyards, enjoying a film is a great way to enjoy the balmy summer evenings. Movies range from the latest Hollywood blockbusters to European art house, so there’s something for everyone. You can even bring your own food and drinks, making it a great date-night and picnic.

Berlin is one of the best cities in Europe when it comes to vintage fashion. For more than a century, Berlin locals have been at the forefront of alternative clothing trends and are never afraid to stand out in a crowd. As you explore the streets, you’ll turn up a whole host of vintage stores and flea markets, hiding away plenty of fascinating finds. It’s the best way to fit in and look like a local.

Like other German cities, Berlin is home to a wonderful array of Christmas Markets during the festive season. If you’re in town during November and December, visiting one should be high on your list of things to do.

The 5 Best Christmas Markets in Berlin:

With so much style, grungy alternative vibes, and fascinating and painful history, Berlin is one of Germany’s most interesting cities. To see the best of the sights and dive into its history, check out our Berlin self guided walking tour below. 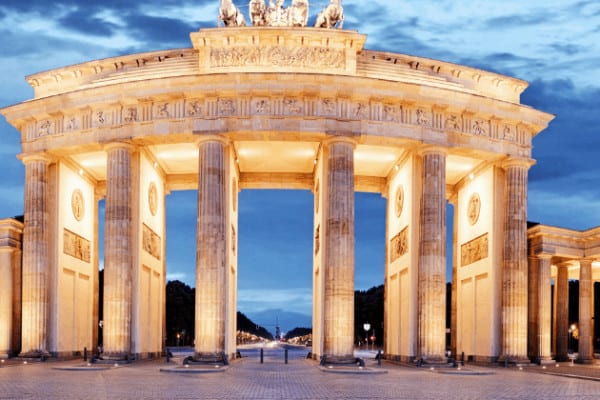 On our tour, you'll learn that Berlin's past is the reason this city is such an anachronism – a visually young city that has inhabited Europe since at least the mid-1200s. You’ll learn about Berlin's ancient beginnings as a riverside…