To discover the history, architecture, and artistic delights of Italy’s capital of food, a Bologna self guided walking tour is the best way.

Welcome to Bologna, the bustling and beautiful capital of the Emilia region in Italy. With a storied medieval center lined with churches, basilicas, and charming piazzas, there’s a lot to love about this destination.

But if there’s one thing that rises above the rest in Bologna, it’s the food. The restaurants and food here are said to be the best in Italy, and foodie travelers will have a field day sampling the local fare. From handmade pasta to aged cheeses and cured meats, you could easily spend your entire time feasting your way around the city. There’s a reason why the city is known as La Grassa, or “The Fat One.”

At the other end of the spectrum, away from the elegant locals who enjoy opera and fine dining, Bologna is also home to the oldest university in the world. That means there’s a buzzing young population as well, and a lot of fantastic nightlife, from live music to theater to the bustling cafés and bars. But it’s just a speck on the impressive history of this city, which dates back to around the 9th century BCE.

The sights, smells, sounds, and people of Bologna await – there’s a lot to discover in this stylish and ancient Italian city, and a Bologna self guided walking tour is one of the best ways to explore it all.

Early Settlement and the Roman Empire

Evidence has been found of settlements in the area that date to the 9th century BCE. The first permanent town was founded at the end of the 6th century, the Etruscan city of Felsina. Like other cities in Italy, it then became a part of the Roman Empire and was a flourishing city with around twenty thousand inhabitants. After the fall of the Roman Empire, the Goths repeatedly sacked the town, and then in the 8th century, it was the Lombards’ turn, sacking the city and then taking control.

During the 11th century, Bologna was thriving. The prosperous city was a bastion of education in Europe, and it was in 1088 when the University of Bologna was founded, the oldest university in continuous operation in the world. Law and medicine were the two renowned schools, drawing in a steady population of keen pupils. However, by the end of the 13th century, Bologna’s elite families struggled for power over the city. It would mark the beginning of wars and revolts, as the warring forces fought to control the city. Eventually, it was the Papal who rose triumphantly, taking control in 1506.

Under the Papacy Rule

For 290 years, Bologna was under Papal rule. During this time, development in Bologna took off, with piazzas, palaces, and churches built across the city. But by the end of the 16th century, things had started to decline. The plague hit and decimated the population, while trade centers shifted away toward the Atlantic.

After joining the Kingdom of Italy in 1860, the city once again began to thrive. But after World War I, Bologna’s progressive elite threw their support behind the rising Fascist movement led by Benito Mussolini. Bologna was rewarded with industry but then became a target for Allied bombing missions in World War II. The city would become a key player in the Italian resistance movement and was liberated by the Allies in 1945.

We’ve barely scratched the surface of the intricate history of Bologna. For a strong foundation that will help you with further explorations, check out our Bologna walking tour below. It can also be done as a virtual tour of Bologna, Italy, letting you discover the city from the comfort of home.

Where to Stay in Bologna

The 5 Best Areas to Stay in Bologna

For most travelers, staying in Bologna’s Centro Storico neighborhood is the best idea. It is the city’s historic center, with cobbled pedestrian-only streets, Medieval buildings, and a wealth of fantastic restaurants, cafés, and bars. It’s also where our walking tour of Bologna takes place, discovering the churches, basilicas, and fabled history of this storied city in Italy.

Located directly next to Centro Storico, the University District is another fantastic area to stay in while visiting Bologna. The main attraction is the university itself, the oldest in the world. The lively student population also makes it the center of nightlife in the city, with restaurants and bars filling quickly.

If you’re traveling with your family, you will do well to stay in Bolognina. Located north of the city center, it’s a quiet and residential area and is perfect for those after a more relaxed stay. The multicultural population mixes people from all over, creating an interesting mix of restaurants, street art, and attractions. It’s also right next to the main train station, which is very handy if you’re traveling around several regions during your trip.

Fiera de Bologna is the business district northeast of the Centro Storico. Home to the convention center and a selection of business hotels, it’s a great spot to pick up some accommodation at a bargain price. The area is also home to the FICO Italy World, a large food factory that gives visitors a glimpse into how the iconic Italian dishes are made. There are restaurants, street food stalls, and trattorias as well.

Finally, one of the city’s coolest areas is Ghetto Ebraico. The former Jewish Quarter of the city, this area dates to the 16th century and has a very distinctive feel. Colorful houses and quaint piazzas filled with cafés make this an atmospheric spot to explore after a walking tour of the historic center.

What to Eat in Bologna?

Foodie travelers are in for a treat; there’s a bounty of sumptuous food on offer in Bologna. After a walking tour, be sure to join a food tour in Bologna to sample the best of the best.

The Top 5 Must-Try Dishes in Bologna

Perhaps the city’s most quintessential dish, tortellini, is a must-try when you’re in this destination. This handmade stuffed pasta is painstakingly made each day from a soft dough stuffed with a meat mixture before being closed. The traditional way of serving this simple dish is in meat broth, but you’ll also find it with cream. Be careful, though; locals can get very mad if you ask for a variation. 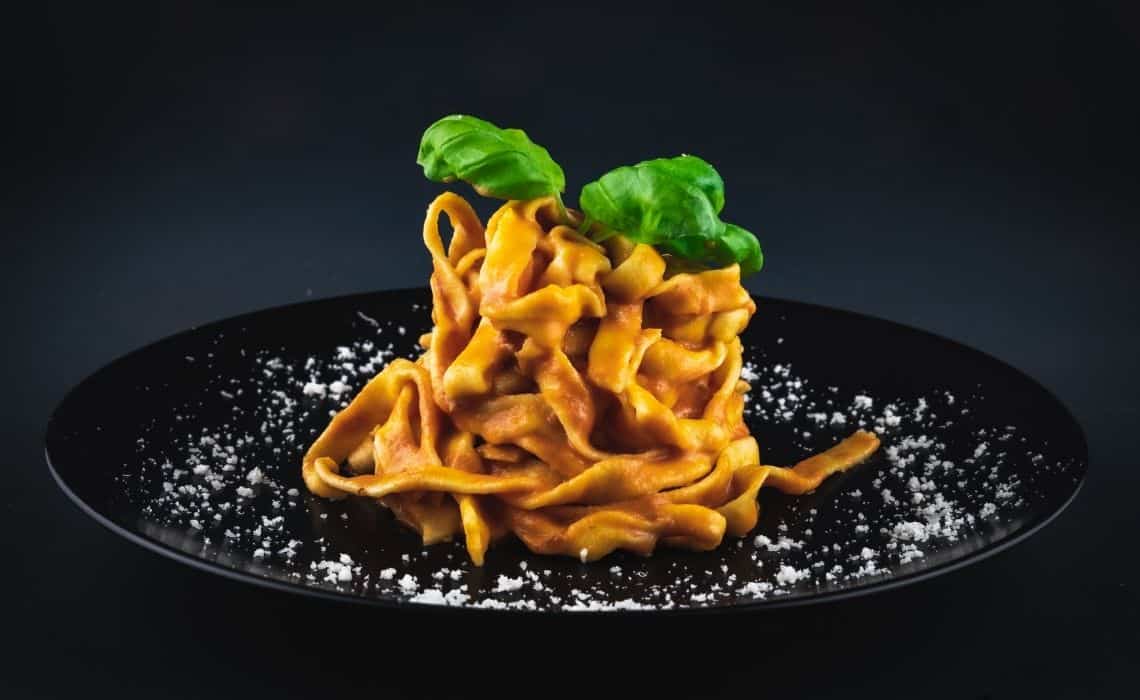 Next up is the hearty ragù Bolognese, a sumptuous meat sauce most often served with homemade tagliatelle. The dish might look simple, but it takes quite a while to make. The rich mixture of tomatoes, minced meat, and other vegetables is heavenly. You’ll find this dish at menus across Bologna, sometimes served with pappardelle pasta in place of tagliatelle. A delicious choice after any Bologna city tour.

Just like pizza in Naples, Lasagne in Bologna is serious business. The fresh pasta is made using spinach in the dough, which is unique to the region. Then, layers are made with a rich ragù sauce, bechamel sauce, and plenty of Parmigiano Reggiano. The result is a decadent and hearty meal.

There are several fantastic meat cold cuts to try while in town as well. Don’t miss out on sampling the mortadella, the white dotted ham with flavors of pork and garlic. Just like their neighbors over in Parma, Bologna also has fantastic prosciutto, tender and salty snacks that go down superbly with a glass of local wine.

Plenty of local cheeses are also on offer across town. Parmigiano Reggiano is the king of them all, but don’t forget to seek out some of the soft stracchino and squaquerone, both delicious. Another classic is the fresh mozzarella Stracciatella. To sample them all with some cold cuts, many restaurants offer a wooden board with an assortment of both alongside some pickled vegetables, olives, and a few more snacky things.

The Leaning Towers of Bologna

You might have heard about the leaning tower of Pisa, but Bologna has two of its own. These two towers, Garisenda and Degli Asinelli, are commonly recognized as the symbols of Bologna, located at the heart of the Centro Storico. Visitors are welcome inside the degli Asinelli, built between 1109 and 1119, where a stair climbs to the top. From this vantage point, spectacular views of the city await.

There’s no other city in Italy – or the world – that has as many porticoes (covered walkways) as Bologna. These ornate arches above the sidewalks of the city center are beautiful and do a lot for the medieval atmosphere of the city. With over 40km of porticoes spread around Bologna, these have been declared a UNESCO World Heritage Site.

As you wander throughout the porticoes of the city, you’ll find plenty of ancient shops that have been passed down through generations. Since the 1200s, Bologna has been known for its artisan craftsmen, working metals, jewelry, and art. Head to the commercial heart of Bologna, Quadrilatero, to discover some of these ancient artisans. Each street here has a name relating to the stores you’ll find there, from the fabrics along Rizzoli Street to the cured meats along Caprarie Street.

There’s a lot to discover, enjoy, and eat in this fantastic Italian city. To get started, check out our Bologna self guided walking tour below. 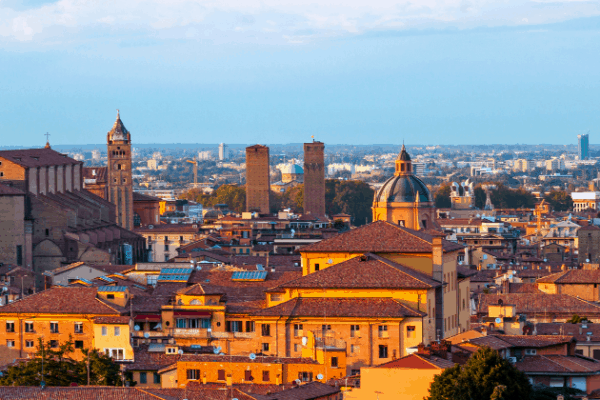 Well known as a food capital of Italy, this tour explores all the architectural and artistic delights the city of Bologna has to offer. Starting at the iconic Due Torre, or ‘two towers’, this circuit of the heart of the…