Exploring Rome on Your Own | Sherpa Tours

Exploring Rome on your own is made easy with our selection of fascinating walking tours of the eternal city. Find out more inside.

Few cities in the world boast as many treasures as Rome. From its ancient ruins to vibrant museums and sumptuous cuisine, there’s no end to the discoveries you can make in the Eternal City.

Follow in the footsteps of the Ancient Romans while exploring Rome on your own, discovering some of the world’s greatest historical sites. The imposing Colosseum, magnificent Pantheon, the celebrated Roman Forum; Italy’s capital city is filled with an incredible amount of ancient history. Rome is equal parts overwhelming and humbling.

Jostling for room amongst the layers of the past are the passionate locals. The street life in Rome is amongst the best in the world – life here is lived outside. Romantic cafés buzz with activity, while stunning piazzas hum with late afternoon socializing. As evening descends, things kick up a notch, with locals dropping in on their favorite bars and restaurants for stylish aperitives, cocktails, and long, lazy dinners.

Speaking of food, the mere mention of Roman cuisine makes our mouths water. There’s something special about an alfresco dish of creamy pasta in a square or roaming quaint laneways with a delicious slice of pizza in hand. The food in this romantic city will set your soul on fire. And for dessert, nothing beats a cup of the city’s creamiest gelato.

Welcome to the Eternal City, where La Dolce Vita comes to life. What’s the best way to experience it all? Simply by walking around Rome.

The History of Rome

Any Rome tour guide worth their salt has a bank of knowledge far more than your average city tour guide. From the myths and legends of Ancient Rome to emperors’ political intrigues, there’s a lot of ground to cover.

Ancient Rome and the Roman Empire

Rome’s founding is mired in legend. It’s said the city was created by the mythical twins Romulus and Remus (although historians disagree). What we do know is that Rome started as settlements on several of the city’s hills. Archeological digs have discovered remnants dating back to the 8th century BC.

However, it’s the Roman Empire that commands the most attention in Rome. The world’s first superpower has Rome at its center and a territory that included up to England, across to the Middle East, and a vast swathe of Northern Africa.

At the center of it all is Palatine Hill, where you can explore Ancient Rome’s remains through opulent palaces, villas, and gardens. Our Palatine Hill Guided Tour will walk you through it all. 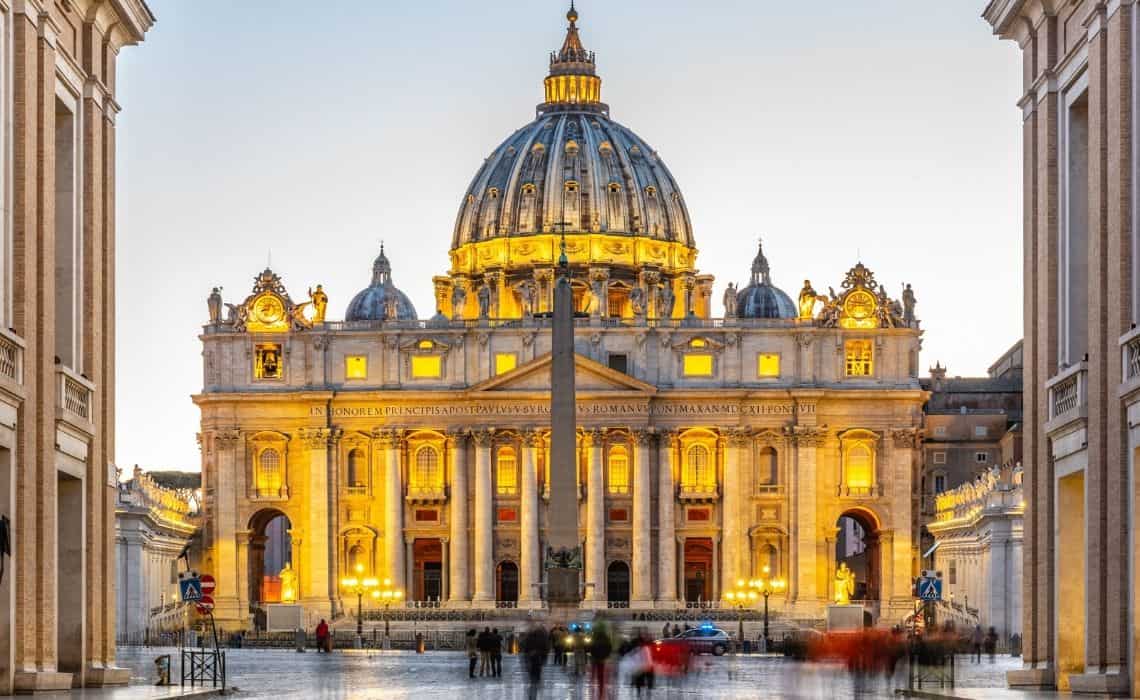 The heavyweights don’t stop at the Roman Empire, though – this city is also home to one of the world’s oldest living institutions, the Papacy. The Vatican City, across the river from Rome’s historic center, is the world’s smallest sovereign state and link to over a thousand years of Catholicism. Here, visitors can gasp at the expansive St. Peter’s Square, admire the fantastic architecture of St. Peter’s Basilica, and marvel at some of the country’s most astounding artworks, including the Sistine Chapel.

A Veritable Feast of Art

But it’s not just the Vatican Museums that are home to the city’s best artworks. Galleries, museums, and churches across Rome also boast their fair share of treasured pieces. Art lovers will have no shortage of things to explore and discover, from the frescoes of Raphael to mosaics in the Basilica of Santa Maria.

Exploring Rome on foot helps visitors get a feel for this ancient city. For an in-depth Rome walking guide, check out our range of tours below. All are available to do on the ground in Italy and virtually, from the comfort of your home.

Where to Stay in Rome

At first glance, Rome can be overwhelming. This sprawling city has plenty of different neighborhoods, each with a different vibe. Lucky for you, we’ve made choosing a breeze.

The 5 Best Neighborhoods to Stay in Rome

First-timers in Rome will love staying in the Historic Center, where you’ll find most of the famous Roman attractions. Its historic cobbled lanes are lively with tourists, cafés, shops, and restaurants. As Rome’s main area for visitors, prices here are generally more expensive, but being in the thick of things is probably more than worth it. This is also the area where our Essential Rome Walking Tour takes place.

For much of the same historic Rome vibes without as many people, Trastevere is a great option. Located on the river’s western banks, it too has beautiful medieval buildings, quaint cobbled lanes, and plenty of those fantastic Roman cafés and restaurants. As the sun fades, this area also boasts some of the city’s best nightlife and is conveniently located close to Vatican City as well.

Staying in this neighborhood also puts you in an ideal spot for the Capitoline to Forum Boarium walking tour, just across the river.

If you’re in Rome to hunt down all the amazing food on offer, we recommend staying in the Testaccio neighborhood. Located 20 minutes south of the Colosseum, this area is rooted in local life and traditional cooking. Local restaurants are the best here, offering a taste of the real Rome. As it’s a bit outside the city center, prices, in general, are more affordable.

For a more affordable stay but still close to the action, Monti is a great option. This neighborhood is sandwiched between the Colosseum, the main train station, and the edge of Rome’s Historic Center. It’s within easy walking distance of everything, and much more relaxed than the busy center.

For an up-and-coming neighborhood, San Giovanni is it. One of Rome’s best-kept secrets, this gorgeous area south of the Termini train station keeps things very authentic. Local life can be explored, and for a great price as well. Perfect if you don’t mind being a bit further from the action or are traveling with kids.

What to Eat in Rome?

Foodies will have a lot to do in Rome after completing their walking tour. If you’re completing a virtual tour instead, why not try your hand at one of the following recipes in your own kitchen?

Cacio e Pepe is the quintessential Roman dish: simple, homely, and delicious. Pasta is tossed in a sheep’s milk cheese, a healthy dash of cracked pepper, and a splash of pasta water to create a creamy sauce—no-frills and yummy.

Pizza comes in many shapes and forms in Rome, but the must-try version is pizza al taglio: pizza by the slice. This is the city’s most popular street food, so do as the Romans do and grab a slice to go as you continue exploring the city streets.

Is there anything as comforting as a delicious carbonara? This creamy egg-based pasta dish is the perfect way to top off any visit to the Eternal City. You’ll find it on most menus, although in true Italian tradition, chefs will often argue what really makes a carbonara.

Sampling the artichokes in Rome will change your relationship with this vegetable forever. Generally, they come in two styles. Roman-style is to braise them, stuff them with herbs and enjoy with a touch of lemon. The Jewish style involves deep-frying, turning them into a crunchy, melt-in-your-mouth treat.

It wouldn’t be a trip to Rome without sampling some of the city’s gelato, either. There are thousands of gelaterias selling all kinds of flavors, from the classics to the more inventive. Whatever you choose, a cup of gelato is a refreshing treat in the summer heat or the perfect nightcap.

The Magic of Cinema

Rome’s beautiful cityscape has been the backdrop for many a whimsical film. There are a few classic films you should watch to prepare for any trip to the city or to pair with one of our virtual tours perfectly.

Rome plays an important role in each of these films, a larger-than-life character akin to films set in New York. Before you know it, you’ll be transported to the Eternal City, admiring its charming sights and the romantic lifestyle etched in its streets. Don’t forget the popcorn! 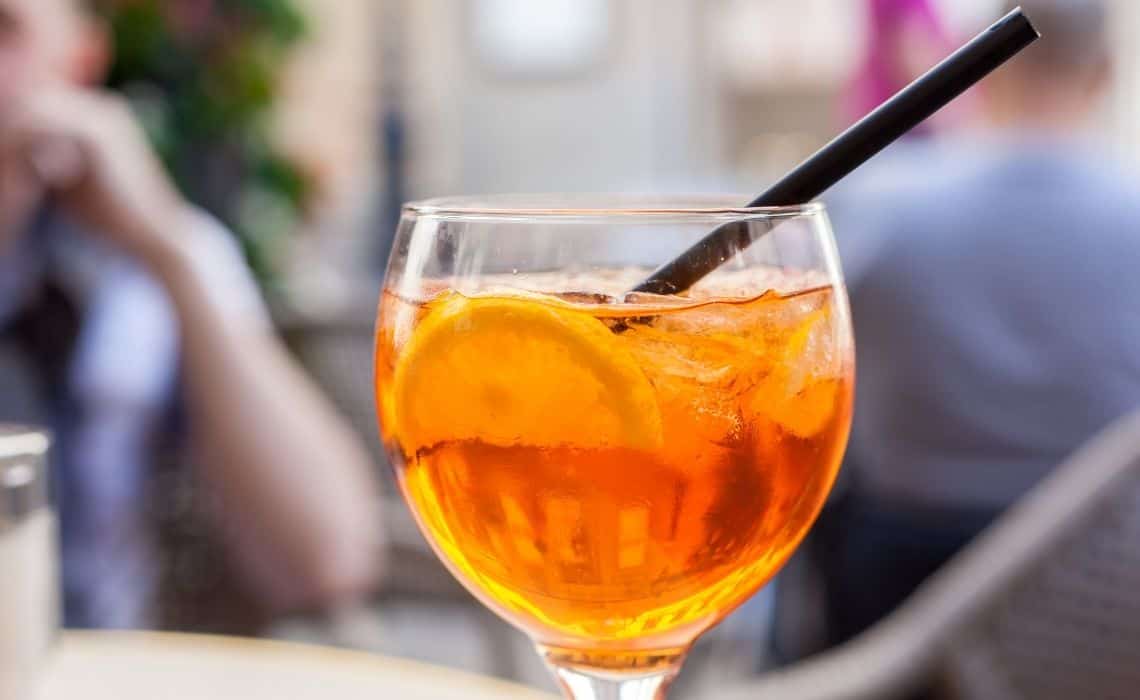 Although originating in Milan, the famous Italian aperitivo has made its way south to Rome. Generally taking place between 7 and 9 pm, this ritual before dinner is designed to whet your appetite before feasting on incredible amounts of Italian food. A sumptuous tradition indeed.

For starters, most Romans enjoy either an Aperol or Campari spritz (a mix of the liqueur with prosecco and sparkling water). The drinks also come with a salty treat, such as olives, peanuts, or a bowl of potato chips to prepare you for the lavish meal that is an Italian dinner.

However, before you strike out for an aperitivo, we encourage you to dress to the nines and partake in the evening ritual of the passeggiata. This is when the locals stroll through the city streets, enjoying the cooler temperatures as the sun sets and meeting with their friends for a chat.

Rome is a magical sight in the golden hour, as the fading sun glances off the incredible basilicas, crumbling ruins, and colorful streets. Joining in the crowds as they casually stroll through the streets is one of the best ways to soak up Rome’s magical atmosphere.

But don’t take our word for it – why not discover it for yourself? Exploring Rome on your own is easy with our range of walking tours of Italy’s fiery and passionate capital 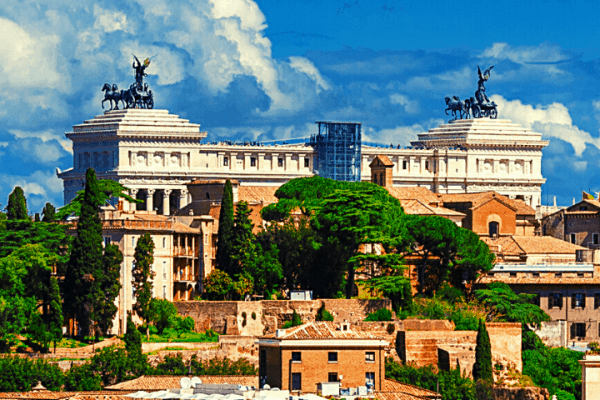 Rome: From Capitoline to Forum Boarium

Our tour explores the area south of the Capitoline Hill. We will start in Michelangelo’s famous Campidoglio square and slowly make our way through the area known as the Velbarum, a low lying valley that leads from the Tiber to… 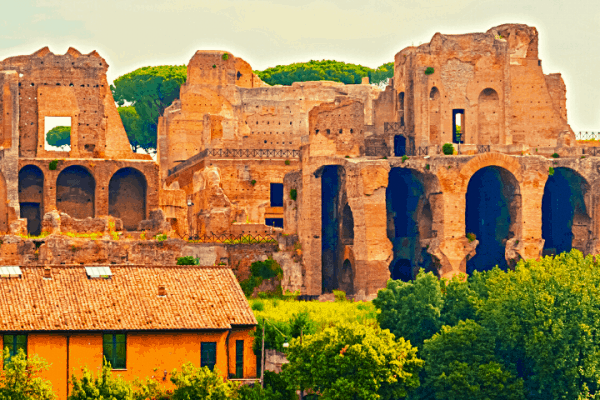 The most central of the famous 7 hills of Rome, the Palatine Hill is likely where it all began for Rome. The hill became the prime real estate location and over time, illustrious villas and gardens, built for Rome’s powerful…

Explore the center of Rome’s historic Campus Martius area in this essential introduction to Roman history, lifestyle and culture. We’ll discuss the flamboyance of the Trevi Fountain and where its water comes from, the elegant Spanish steps, and the structural…