Our self-guided Naples city tour is one of the best ways to discover the culture and history of this elegant Italian city.

Naples, the third biggest city in Italy, doesn’t put on a show for tourists. Perched on the edge of the Mediterranean, it’s noisy, gritty, and hectic; this is real-life Italy. But with it comes a lot of beauty as well. Baroque architecture, Gothic cathedrals, and a beautiful old town (one of the oldest in Europe) all make this one of Italy’s most alluring destinations. There are castles and palaces, ruins and vibrant frescoes, and boundless art in a series of world-class museums.

As one of the oldest cities on the continent, the history here is formidable. From its beginnings in Ancient Greece to a successful stint as part of the Spanish Empire, everyone has left their impact on the city. Today, you can jump through the eras with ease, discovering the fascinating myths and legends along the way. When you’ve worked up an appetite with all that history, duck into a nearby restaurant to experience some of the best food in Italy. From its world-famous Neapolitan pizza to hearty dishes of pasta, you won’t go hungry here.

Naples also acts as a gateway to some of Italy’s most famous sights. The haunting ruins of Pompeii are 30 minutes away, the chilling archaeological site trapped in time thanks to the eruption of Mount Vesuvius. Also nearby is the famous Amalfi Coast, one of the world’s most touristed stretches of coast since Roman Times. When you’ve had your fill of the noise and hectic pace of the city, escaping here provides some chic and sophisticated fun in the sun.

Naples is a seriously tempting destination and one of Italy’s best. Come to terms with the city’s history and famous sights with our Naples city tour, one of the easiest ways to get to know this elegant Italian city.

Naples has its roots dating back to Ancient Greece. During the 8th century BC, they started the settlement here, the first on the Italian mainland. Back then, the city was known as Cumae and not Naples, but it quickly became one of the most important Ancient Greek colonies. When Greece’s influence began to wane, and Ancient Rome took over, the city remained a cultural hub of the empire.

As the Western Roman Empire began to decline some centuries later, Naples was a hotly contested city. It became its own Duchy with a Duke in charge, but throughout the next centuries into the Middle Ages, it was conquered time and time again. The city passed hands from the Normans to the Germans, to the French, and finally to the Spanish in 1503.

Under Spanish rule, Naples began to flourish; by the beginning of the 17th century, the city was the second largest in Europe, with Paris being the largest. Two hundred fifty thousand people lived in Naples, and it became a hub of culture; some of the best writers, philosophers, and artists called the city home during the Baroque period. Spanish rule only came to an end in 1714 after the Spanish War of Succession, and in 1734, Naples joined Sicily and the rest of Italy’s south to become the independent Kingdom of Two Sicilies.

With the French Revolution setting off changes across Europe, Naples wasn’t left untouched. Napoleon’s armies arrived on its doorstep in 1799, but revolutions in the city returned Naples to the Kingdom of Two Sicilies in the next two decades. In 1861, Naples voted to join the Kingdom of Italy, where it remains today. During World War I and the Great Depression, the city suffered and was bombed heavily during World War II. Naples’ road to recovery has been long, but it is finally emerging again as the hub of fascinating culture and beauty it has been throughout its history.

The long history of Naples is a fascinating story. To dive into it headfirst, check out our walking tour of Naples. It’s also available as a virtual tour of Naples, Italy, letting you discover this buzzing Italian city from the comfort of home. 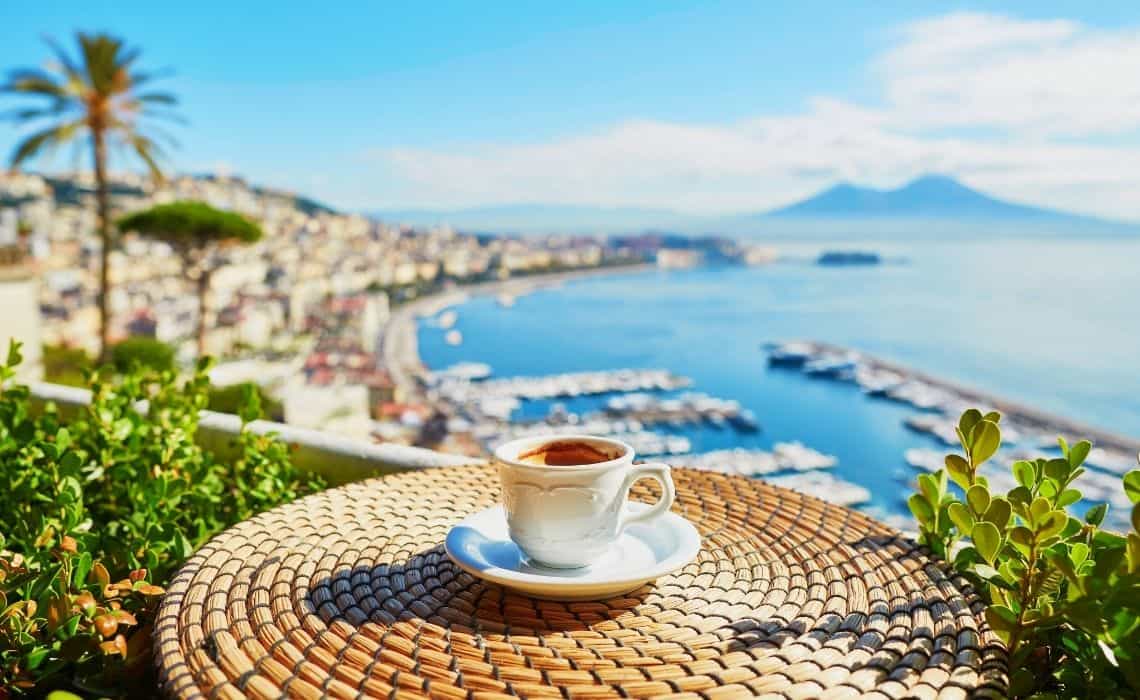 Where to Stay in Naples

The 5 Best Neighborhoods to Stay in Naples

The most obvious area to stay in Naples is its gorgeous Centro Storico, or in English, the old town. The entire area is a UNESCO World Heritage site and contains most of the famous Naples monuments. The romantic cobbled streets are lined with restaurants, bars, and cafés, while Vespas zip up and down the roads that have been here since Ancient Greece started to build Naples around 2000 BC.

For a taste of local life, Vomero is a lovely and quiet residential neighborhood located to the west of Centro Storico. It’s a safe and elegant neighborhood, with great views over the city. It’s also still quite central, letting you walk into the Centro Storico within around 15 minutes.

Just down the hill from Vomero is the neighborhood Chiaia, another great place to stay. Right on the water, this is an area well-known for its high-end shops, elegant bars, and classy restaurants. Most hotels offer great sea views, so prices can be a little more expensive than in other parts of the city, but the calm and tranquil area is perfect for families.

For something more gritty and real, Quartieri Spagnoli is it. You’ll be able to find budget accommodation at every turn. It’s not quite as polished as some of the other touristy areas, but it isn’t known as a dangerous area after years of work by the city. There are plenty of churches, local restaurants, and some of the best street food in Naples.

Finally, for a lovely spot outside the center, Posillipo fits the bill. Located southwest along the coast, this is historically where the well-off Romans built their villas back in the day. The tradition lives on, with some of the richest families in Naples building elegant houses here. The calm area even features several beaches.

What to Eat in Naples?

The birthplace of the world-famous Neapolitan pizza, Naples, is a site of serious foodie pilgrims. Pizza lovers from all over the world will tell you that this is the best pizza in the world, and we can’t argue with that. A classic Neapolitan pizza showcases the region’s best ingredients: a basic dough is topped with the local tomatoes, creamy mozzarella, some basil, and olive oil. Woodfired for between 60 and 90 seconds only, it emerges with a perfect char and piping hot melted cheese. It doesn’t get much better than this. 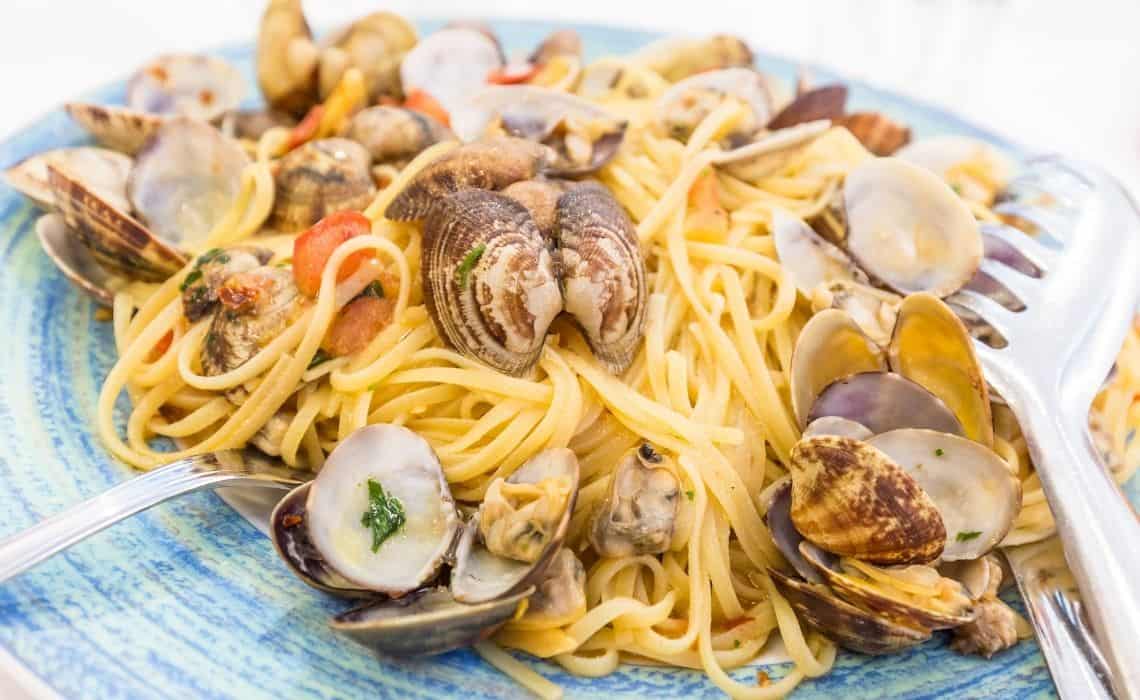 When you’re tired of all the pizza, it’s time to move onto the pasta. The go-to pasta dish in Naples is spaghetti alle vongole, another simple dish that combines spaghetti with fresh clams caught in the Mediterranean. It’s all cooked together in a mix of white wine, olive oil, and garlic, enhancing the sumptuous seafood flavors.

For something heartier, another Napoli special is its ragù. This heavenly sauce is made from slow-cooked meat, simmered in a pot of those lovely and sweet local tomatoes. The result is a rich and flavorsome sauce served on its own as a second course or over pasta as a main. There’s also a similar dish served without the inclusion of tomatoes called pasta alla Genovese.

Cheese lovers will adore the buffalo mozzarella in Naples. The milk from Mediterranean buffalos, of which there are many in the countryside surrounding Naples, turns into this creamy delight. Same-day mozzarella served with fresh tomatoes and a dash of olive oil couldn’t be simpler – or more delicious.

Although not a food, Naples takes its espresso so seriously that it’s a must-try while visiting the city. The perfect shot of espresso isn’t just about the taste (although they’ve got that down) but the ritual of drinking it. Served with a glass of water, this strong little cup of coffee is best enjoyed standing in one of the many espresso bars across the city. Why not duck into a café while touring the famous Naples landmarks?

The Ruins of Pompeii

One of the main reasons why travelers flock to Naples in such numbers is to visit the ruins of Pompeii. Naples is the largest city near these haunting ruins, which take in a town petrified by ash when Mount Vesuvius violently erupted in 79 CE. Today, the Roman settlement remains trapped in time, offering us a glimpse at what life was like through the remains of merchant houses, temples, and frescoes. Trains regularly leave from the central train station in Naples to the ruins and take around 35 minutes.

Naples also acts as one of the major gateways to another of Italy’s most famous locales: the Amalfi Coast. Jagged cliffs plunge into sparkling turquoise waters, hidden coves hide beaches lined with sun loungers, and a series of romantic and picturesque towns are strung along the coast at easy intervals. The landscapes are spectacular, the towns friendly, and the food amazing – this is a must-visit area when you’re in Naples.

It comes as a surprise to many that Naples, like Paris, boasts an extensive network of catacombs underneath the city. Delve underground to turn up ancient frescoes, city ruins, bones, and basilicas—a nice addition after you’ve completed your walking tour of Naples, Italy.

There’s a lot to discover – and love – about this charming Italian city. Discover it all with our self-guided Naples city tour below. 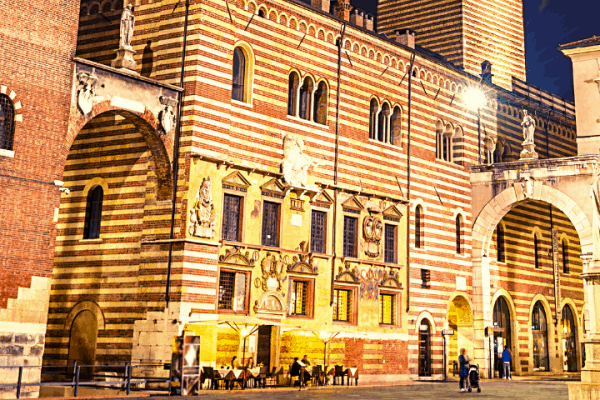 Our tour is wholly focused on the Centro Storico, Naples' historic center, bounded roughly by the original Greek walls. As well as glimpsing some of its juxtaposed classical heritage, a good portion of which has been excavated of late, you’ll…