Our Pisa walking tour is one of the best ways to discover this gorgeous Italian city and step beyond the main tourist trail.

Pisa is one of Italy’s most famous cities, thanks to its memorable leaning tower. Angling at roughly four degrees, it’s a sight that stays with you long after you’ve gone home. Beyond that, the guidebooks don’t really give Pisa a second thought but stay a while, and you’ll discover a city rich in history and culture, with plenty of secrets to discover if you wander away from the central Piazza dei Miracoli.

For starters, there’s a wealth of history here – Pisa was once one of Italy’s leading maritime powers up until the Middle Ages. There’s Romanesque architecture and Gothic cathedrals aplenty, as well as gardens, galleries, and museums to explore. The beautiful banks of the River Arno provide wonderful diversions for walking after you’ve finished looking around.

Since the end of the Middle Ages, Pisa has also been known as a center of education. Its university is among the best in Italy, and students flock from all over to study in its historic halls. The city accommodates its large population of students with bars, restaurants, and cafés, spilling out onto the streets in a show of vibrant Italian city life. Stray away from the center of Pisa’s tourism, and you’ll discover a delightful Italian city that doesn’t dress itself up for tourists.

A Pisa walking tour is a great way to get to know this beautiful city, exploring its streets, and getting under its skin. 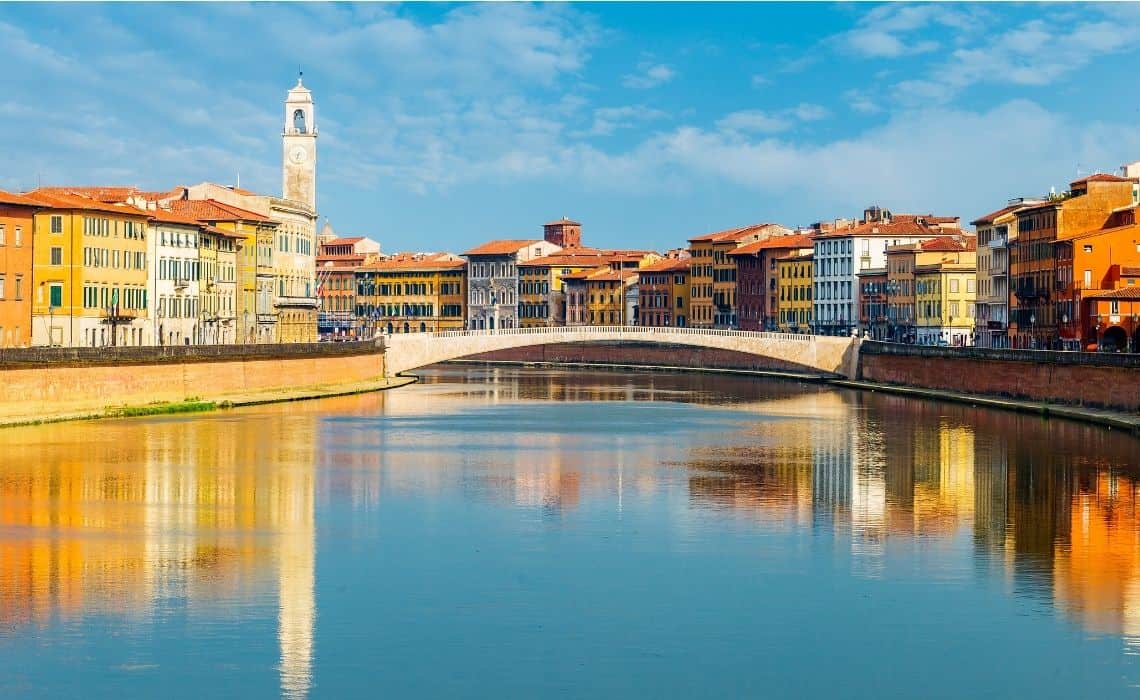 It’s unsure who founded the city of Pisa – it could’ve been Ancient Greece or their ancestors, the Pelagsi, or the even older Italian civilization of the Etruscans. We know that it was already considered an old city by the rise of the Roman Empire and a serious naval power.

The Romans began using the city port as a jumping-off point for their naval fleet. Its strength lay in its access to the sea; even as the Western Roman Empire collapsed, it remained a powerful urban center in the Tuscany region.

Pisa’s navy continued to grow and became even more powerful after the fall of the Western Roman Empire. It became one of Italy’s four main maritime powers, with Venice, Amalfi, and Genoa making up the other three. With swift access to the Mediterranean, the city became one of the busiest trading ports, conducting commerce throughout the Middle Ages with the Western Mediterranean islands and the southern coasts of France and Spain.

Florentine Conquerors and a Decline in Power

With growing internal struggles within the powerful city, it provided an opportunity for Florence to conquer and occupy Pisa in the year 1406. Pisa would briefly regain independence when the French invaded in 1494 but was recaptured by Florence in 1509. After this series of events, Pisa’s naval fleet had lost all power, and the city went into a long period of decline.

The Industrial Revolution and WWII

From the mid-18th century onwards, Pisa managed to climb out of its decline thanks to its growing reliance on industry, setting it on the path toward becoming the city you see today. It was heavily bombed in World War II but has since been restored, with many historical buildings remaining intact.

Pisa has a surprising history to discover from ancient beginnings to its time as one of Italy’s greatest maritime powers. Our walking tour of Pisa delves into the story in-depth, uncovering the stories behind some of the city’s most famous monuments and grounding them in the historical events of the time. It can also be completed as a Pisa virtual tour, letting you discover the city from home.

Where to Stay in Pisa

The Best Areas to Stay in Pisa

For first-time visitors in Pisa looking to be in the thick of the action, Santa Maria is the best neighborhood to stay. This is the city’s historic heart where you’ll find the famous leaning tower of Pisa as well as the city’s other, lesser-known attractions. As the center of tourism in the city, there are also plenty of restaurants, bars, and accommodation options. This is where our self guided walking tour of Pisa begins.

Head east of Santa Maria, and you’ll enter the neighborhood San Francesco. This is an ideal area to stay in Pisa if you’re looking for something a little bit more low-key and budget-friendly that’s also close to the sights. The best part about this area is that it’s also considered a historic center, so the atmosphere is very similar to that of Santa Maria without the crowds.

Head south of the River Arno and you’ll find yourself in Sant’Antonio, another pleasant area of Pisa. The historic streets are charming and pretty, primed for wandering around the city without making a beeline for the famous tourist attractions. It’s also a great place to embark on day trips thanks to the nearby train station connecting the region’s different towns. Prices here are much cheaper than north of the river.

San Martino is east of Sant’Antonio, nestled up against the banks of the River Arno. It’s a very cool and alternative neighborhood for your stay, letting you avoid the Pisa day-trippers of the center and get a feel for how the locals live. There are plenty of parks and cafés for espressos, while the 15th century Pisa Fortress is a highlight.

The further you are from the center, the cheaper the accommodation. San Giusto is no different, located on the southern side of the railway tracks separating the area from Sant’Antonio and San Martino. It’s still within walking distance, and the neighborhood is home to lots of bed and breakfasts inside local homes. The proximity to the train station also makes it easy to trek off for a day on the Cinque Terra Coast or in Florence.

What to Eat in Pisa? 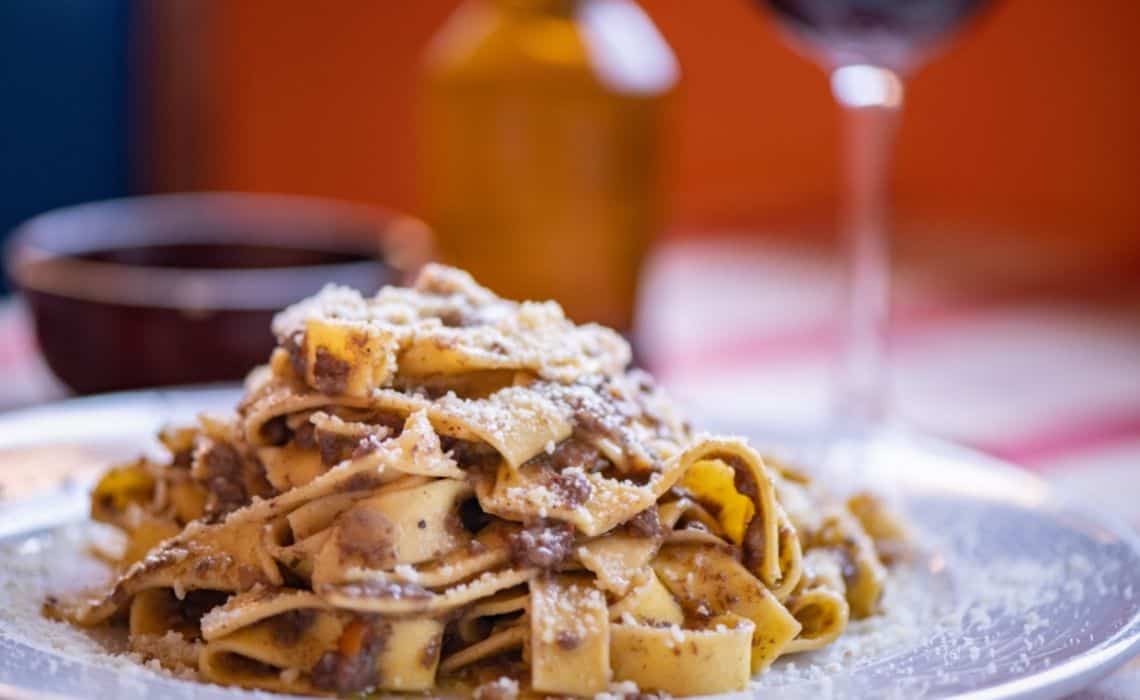 Pappardelle Cinghiale, or slow-cooked boar, is a regional specialty in Tuscany. Pappardelle is the name of the pasta, thick noodles made fresh each day, while the cinghiale is the wild boar, often made into a meaty and rich ragù sauce slow-cooked with tomatoes and red wine. Top it with fresh parsley and a generous shaving of Parmigiano cheese, and you’ll quickly see why this rich dish is so popular throughout this area of Italy.

Another pasta dish served in restaurants around Pisa is spaghetti con le arselle. Arselle in English is a word for a particular type of small clam found in the river, so this dish will be a favorite with those who are fans of seafood flavors. It can also be served with tagliatelle and most often comes with a simple sauce. Either pasta dish is a fantastic choice to recharge after our Pisa guided tour.

Pappa al pomodoro is another quintessential Tuscan food to try while in Pisa. This is a bread and tomato soup made from simple ingredients. There’s stale bread, juicy local tomatoes, and olive oil – the result is a comforting dish that’s warm, easy, and delicious.

Aside from the Tuscan specialties, of which there are plenty to try in Pisa, the city is also known in the region for its cheese. There are several different types to sample, so your best bet is to simply order a cheese board at a restaurant in the city. It’s often served with a range of cured meats, crackers, and olives as well.

Where there are tourists in Italy, there are gelato shops. But with so much competition, the gelato here in Pisa is top quality. Make sure to sample a variety of flavors during your stay in the city; there’s nothing quite like enjoying this cold treat while wandering around the Italian streets.

The Leaning Tower of Pisa 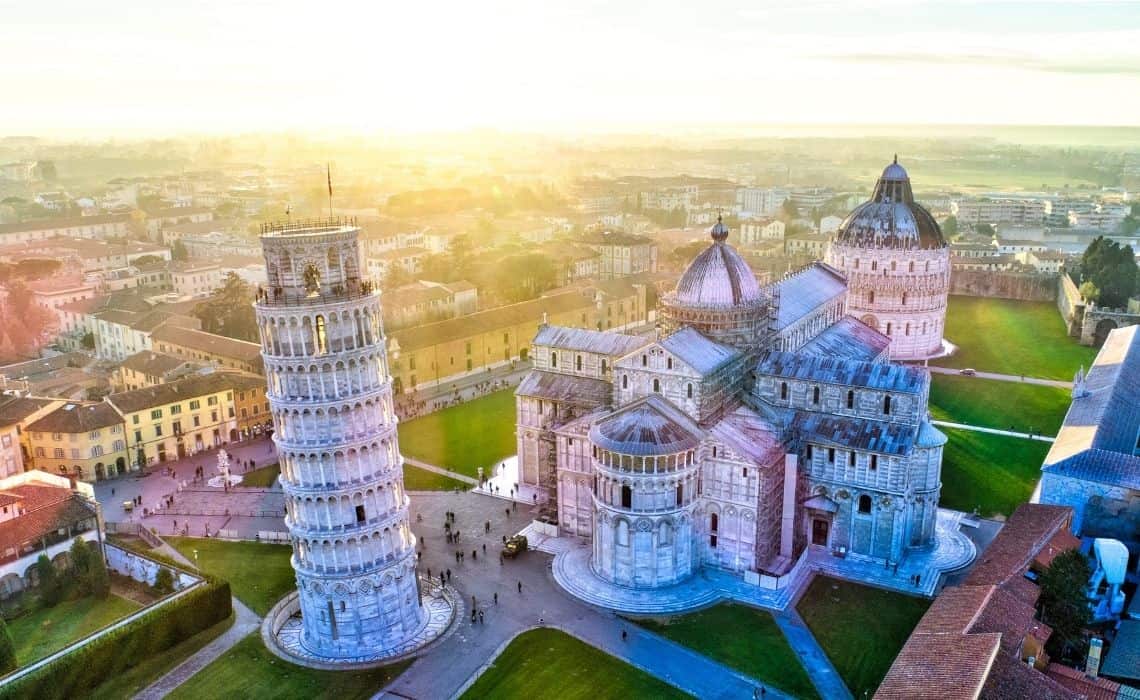 There are no two ways around it; the leaning tower of Pisa is the most popular reason travelers come to this corner of Tuscany. It took almost 200 years to build and began to tilt to the side almost immediately after it was completed and unveiled in 1372. Low-quality soil beneath the tower is the cause of the now-famous tilt, although it was heavily stabilized during the 1990s. There are only 45 visitors allowed inside the tower at any given time – to avoid disappointment, book your ticket in advance if you plan on ascending to the top.

Aside from tourism, the city of Pisa Italy, has another defining feature: its commitment to education. The University of Pisa is one of the top-ranked universities in all of Italy and is widely considered one of the top 200 universities in the world. Students from around the country and Europe vie to get into the mathematics, physics, engineering, and computer science programs. Step away from the tourist center for a while, and you’ll quickly discover a historic city filled with a vibrant, youthful life in its bars, cafés, and restaurants. Be sure to keep an eye out for its historic bookshops as well.

Tuscany must be one of Italy’s most romantic and alluring regions. With golden light falling across its rolling green hills, rustic vineyards bordered by lanes of cypress trees, and handsome Medieval villages, venturing outside of Pisa to explore is strongly encouraged. For starters, the food and wine here are incredible. Tuscany is widely credited as the inventor of the ‘Slow Food’ movement, and you could spend a lifetime tracking down your favorite wines, hand-cut pasta, and local kitchens. Then, there are the cities, towns, and villages, each overflowing with Italian charm and offering a taste of the good life.

5 More Towns in Tuscany to Explore

There’s far more than meets the eye in Pisa, a town with a long and fascinating history and a wealth of sites to discover beyond its famed Leaning Tower. To discover it all, our Pisa walking tour below is one of the best ways.

Most famous for the iconic leaning tower, Pisa has so much more to offer than just its teetering cathedral belltower. The brilliant cathedral itself is a shining example of Italian Gothic architecture, alongside the marvelous baptistery, the largest ever built…