This Pompeii self guided tour will help you discover the highlights and lesser-known areas of this fascinating set of ruins in Italy.

Sprawling over a large area southeast of Naples in southwest Italy, Pompeii is an ancient city frozen in time. Once a bustling trading town of the Roman Empire, a devastating eruption from nearby Mount Vesuvius rained down ash and pumice on the city, capturing around 2000 citizens in the devastation.

Throughout history, archeological digs have uncovered almost 75% of this city in what is now one of the world’s most fascinating archaeological sites. Temples dedicated to Egyptian, Greek, and Roman gods abound, while frescoes, bodies, and ancient houses are preserved in time. Also, count on finding mosaics, pottery, vases, and glassware.

What’s left today is a unique look into Roman life at one of the world’s most fascinating archaeological sites. Remarkably well preserved, visitors can discover the sprawling city at their own pace. Walk down ancient Roman streets, admire the beauty of an amphitheater, and marvel at the political slogans and poetry scrawled across the walls.

Perhaps the spookiest part of any visit here is the bodies. Decomposing through time, they eventually left a void in the exact shape of the human who was once inside.

Visitors to the ruins can explore this sprawling site with our Pompeii Self Guided Tour, taking in the top things to see in Pompeii as well as the lesser-known areas.

A Bustling Center of Trade

The origins of Pompeii as a settlement date back to the 8th century BC, when five villages were founded in the area. Quickly being picked up by the Ancient Greeks and then the Romans, it was one of the main trading and commercial towns in the Italian region of Campania.

Leading up to the devastating eruption, several earthquakes shook the Bay of Naples, damaging Pompeii in the process. In 62 AD, a particularly large earthquake caused much of the town’s population to evacuate. Not all would return, and much of the damage caused still hadn’t been repaired 17 years later when Vesuvius struck.

On the 24th of August, 79 AD, Vesuvius erupted. Rumblings in the earth weren’t heeded at the time, as the citizens were very used to minor earthquakes. Over the next two days, the city was buried in a rain of ash and pumice, covering everything from sheltering citizens to ancient temples. It’s estimated that about 2000 perished in the eruption, killed by toxic fumes spewed from the volcano.

The ruins were discovered again in 1594, but the real excavation wouldn’t begin until almost 200 years later, in 1748. Since then, several periods of excavation have continued to unearth the ruins. Everything from shops to temples has been discovered, and digs are ongoing to this day. The entire area is a listed UNESCO World Heritage Site.

Today, making sense of the ruins is best done with a Pompeii walking tour. It’s also available as a Pompeii virtual tour, letting you discover this fascinating archaeological site from the comfort of your home.

Where to Stay in Pompeii 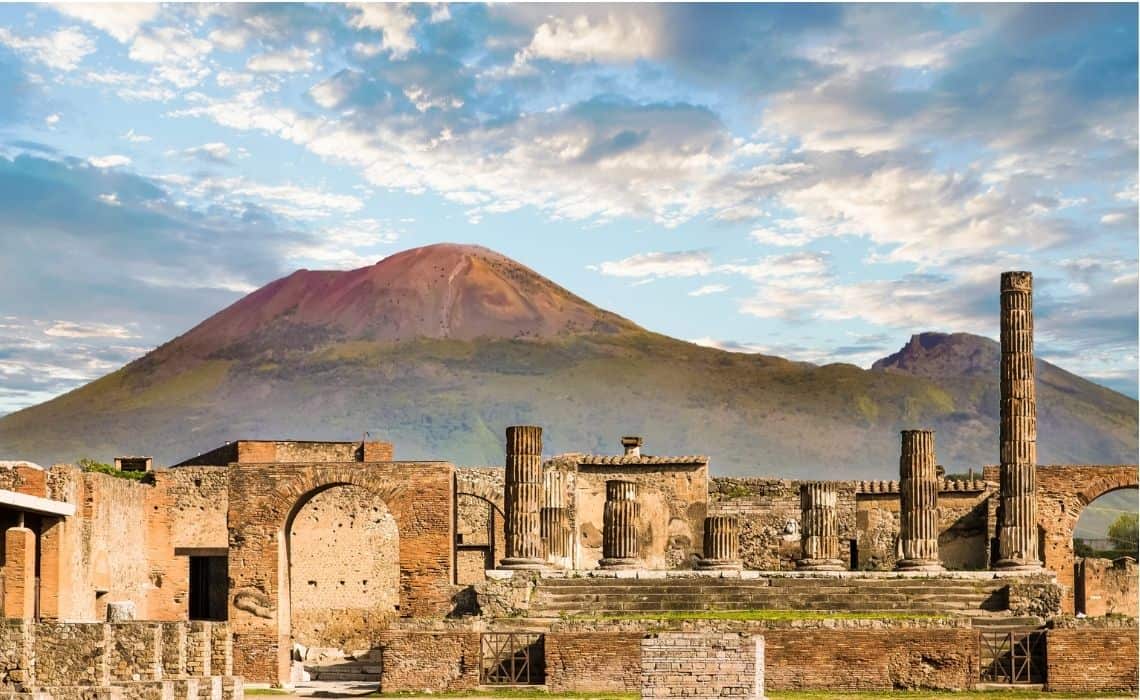 Although you can stay near the ruins, Pompeii is also accessible from several nearby cities.

Where to Stay When Visiting Pompeii

As the biggest city nearby, Naples is a great choice to stay. Equal parts grit and elegance, this is an Italian city that lets you learn about the heart of Southern Italy. Home of the world’s best pizza, pasta, and espresso, you’ll have plenty of food to keep you busy, while the historic center is simply beautiful.

On the coast, Sorrento is a charming town with fast train connections to Pompeii. Dramatic cliffs plunge into the sea, while a beautiful historic center makes this one of Italy’s prettiest towns. Regular trains connect Sorrento with the Pompeii ruins entrance.

For a little bit more of a relaxed vibe than Sorrento, the next town along the train line towards Pompeii is Sant’Agnello. This quaint little hamlet has a peaceful, local feel to it and is devoid of the busy crowds that flock to Sorrento.

The Amalfi Coast is another fantastic destination to stay in the area. Although rather close to Pompeii, traveling to the ruins must be done with a connection through Sorrento anyway. Buses run regularly to Sorrento from each town along the Amalfi Coast. Once there, you can jump on the train heading towards Pompeii.

Finally, staying in Pompeii is also an option, and perhaps a good one if you’re looking to explore the ruins over a couple of days. Although there are plenty of nice hotels, this area is very quiet and not very lively after the sun goes down. But if you’re looking to get a jumpstart on the cruise ship tourists who pour in after 10 am, this is your best shot at having the ruins to yourself for a little while.

Southern Italy offers a bounty of delicious and fresh dishes. Before or after you’ve finished a walking tour of Pompeii, make sure to try some of the region’s specialties.

First things first, if you’re dropping by Naples, you should track down a Napoli Pizza. These pizzas have a reputation as the best in the world, and it’s a serious business in the city. No, there’s no debate about whether pineapple belongs on these pizzas. The go-to order is a classic Margherita pizza, simple and delicious.

Spaghetti Alle Vongole is a dish available at any coastal town in the region of Campania (of which Naples is the capital). Simple and sumptuous, it includes spaghetti and clams cooked with garlic, olive oil, and white wine, with a garnish of fresh parsley.

Another favorite in Naples is fried pizza, a delicious street food perfect for wandering around the city. The pizza toppings are sealed between two slices of pizza dough, deep-fried until it’s golden and crispy. It’s worth the calories.

Buffalo mozzarella is another staple of Southern Italy, made from the milk of the Mediterranean buffalo. This creamy cheese doesn’t get much fresher than in the towns around Pompeii, as it’s in Campania where most of it is made.

Finally, another specialty of the Amalfi Coast region is scialatielli all’amalfitana. This freshly made pasta is slightly thicker and much shorter than spaghetti and perfect for mopping up rich seafood broths. Which, of course, means the pasta dish usually comes paired with fresh calamari, mussels, shrimp, and clams. Buon appetito!

The Peak of Mount Vesuvius 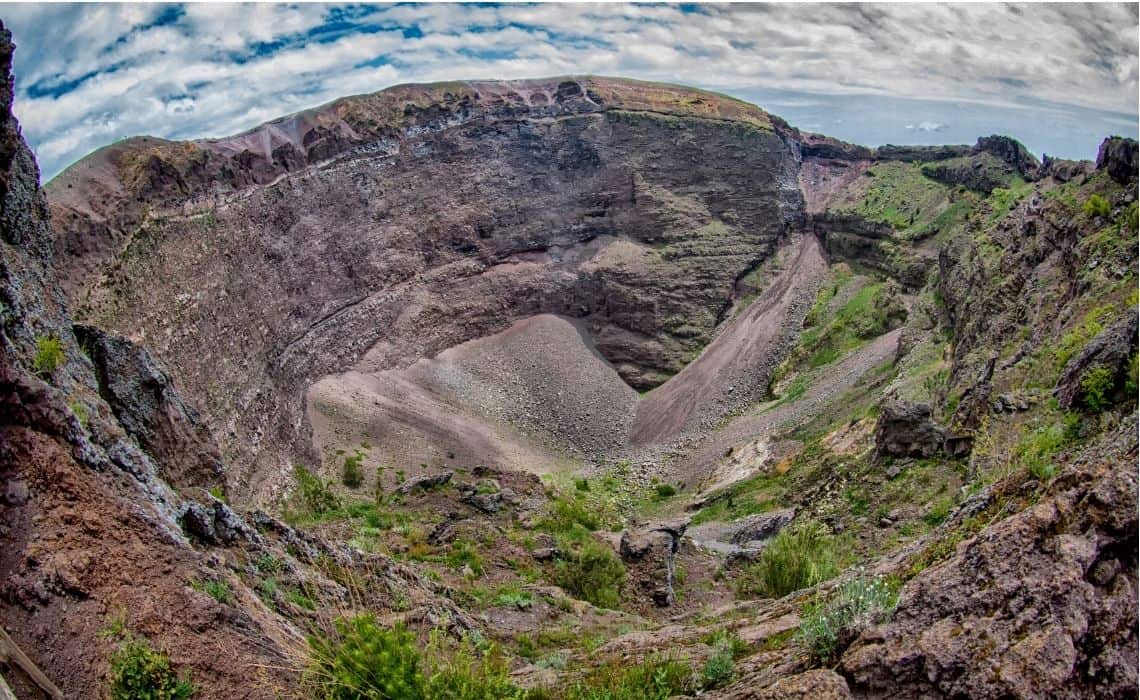 Visiting the ruins is an awesome experience, but equally interesting is scaling the volcano’s peak and seeing the smoke wisping out of the crater. Curious travelers have been scaling this mountain since the 1600s, and it was even a lesser-known stop along the famed Grand Tour. Buses and shuttles climb up most of the way, leaving from Naples, Sorrento, and other towns surrounding the mountain.

Make sure to wear comfortable shoes, as you’ll have to climb the final mile to the peak. The path of dusty, volcanic gravel from the parking area is generally acceptable for all fitness levels.

Another town frozen in time by the eruption of Vesuvius is closer to Naples: Herculaneum. This ancient Roman fishing town is much more compact than Pompeii, and if you’ve got some extra time in the region, it is well worth a visit. From mosaics to skeletons to clothing, this fossilized city also contains a wealth of delicate items to inspect. Excavations are ongoing here as well, although moving very slowly.

Finally, to make sure you take in all the beautiful treasures found in Pompeii and Herculaneum, a visit to the Archaeological Museum in Naples is a must. Containing an impressive collection of stone engravings, ceramics, glassware, and mosaics, a visit here will further enhance any explorations of either set of ruins.

Pompeii is without a doubt one of the world’s greatest archaeological sites. A visit here is both a humbling reminder of nature’s power and a fascinating look at ancient Roman life. To discover the highlights and lesser-known areas of this world-famous site, check out our Pompeii self guided tour below. 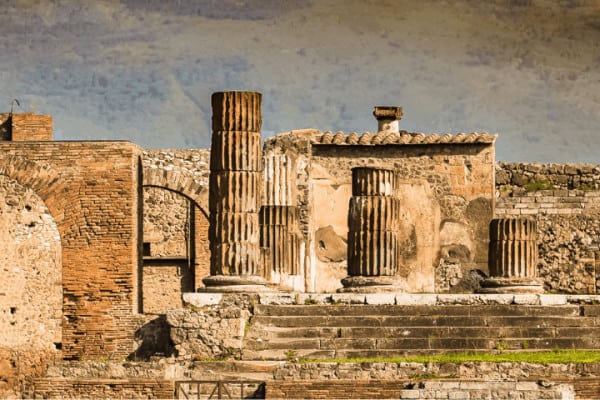 Our tour takes in Pompeii’s must-see highlights along with some of its lesser-known but most intriguing sites. You’ll cover some of its grandest ancient temples, dedicated to Greek, Roman and Egyptian gods. You’ll visit some of the finest villas, rich…