A self-guided tour of Florence is one of the easiest ways to familiarize yourself with this romantic and alluring Italian city.

Welcome to Florence, Italy, one of Europe’s most enchanting cities. This beautiful Italian city has wooed many a traveler with its magical web of charming lanes and will continue to do so. Filled with elegant Renaissance palaces, the world’s most extraordinary art, and the sumptuous smells of the region’s gourmet cuisine, this city is irresistible.

As the birthplace of the Renaissance, art lovers will find no equal to Florence in all of Europe. This city is where the old masters defined and shaped Europe’s emergence from the dark Middle Ages. From iconic sculptures to fascinating artworks, visitors can marvel at creations from artists like Da Vinci, Michelangelo, and Botticelli.

It’s not just the artworks in Florence that give this city its fine reputation. Architecture, too, is a feast for the eyes. As riches poured into the city during the 14th and 15th centuries, it was funneled into graceful palazzis, grand basilicas, and of course, the iconic Florence cathedral. It comes as no surprise to anyone that the entire city is designated as a UNESCO World Heritage Site.

Finally, there are no two ways around it: this city is a foodie’s dream destination. Delicious meals are tied into this city’s unique history and geography like nowhere else in Italy. And the wine? Exceptional.

Florence will charm and seduce you as soon as you step foot in its streets. Luckily, our self-guided tour of Florence will help you discover this enchanting Italian city.

Visitors to Florence usually spend most of their time in the city’s historical center. Containing some of the most important sights, it’s here where our Essential Florence Walking Tour takes in the best of the glittering Tuscan capital.

Florence was first founded as a fortified village by the Roman Empire during the 1st century BC. As a village, it flourished, located along well-traveled roads as well as in a fertile valley. Even after the fall of the Roman Empire, Florence wasn’t hit as hard as other Italian cities. However, it wouldn’t reach its former economic heights until around the year 1000 AD.

Birth of the Renaissance

Under the feudal lords of Tuscany, Florence became an independent city-state in Italy, making way for powerful political dynasties and a boom in wealth. This kickstarted the Renaissance period in Europe, famously originating in the city’s streets. At the start of the 14th century, art, philosophy, literature, music, politics, and science took center stage in Florence. This movement would eventually spread through France, England, and to the Northernmost reaches of Europe. Masters such as Dante, Galileo, Michelangelo, and Da Vinci all left their mark on the city.

Any explorations of Florence will turn this family name up time after time. Controllers of Europe’s largest bank turned political powerhouse. This family contributed to and built so much of the Tuscan capital’s material wealth. Details of their wealth and exploits are around every corner in Florence, waiting to be discovered.

For an in-depth look at exactly how they shaped Florence, our walking tour Travel Babbo’s Classical Florence introduces them as well as a raft of other medieval characters from the city.

For in-depth Florence walking tours, check out our range of options below. Both of our walking tours are also available as a virtual tour of Florence, letting you explore this gorgeous city from the comfort of your home.

Where to Stay in Florence 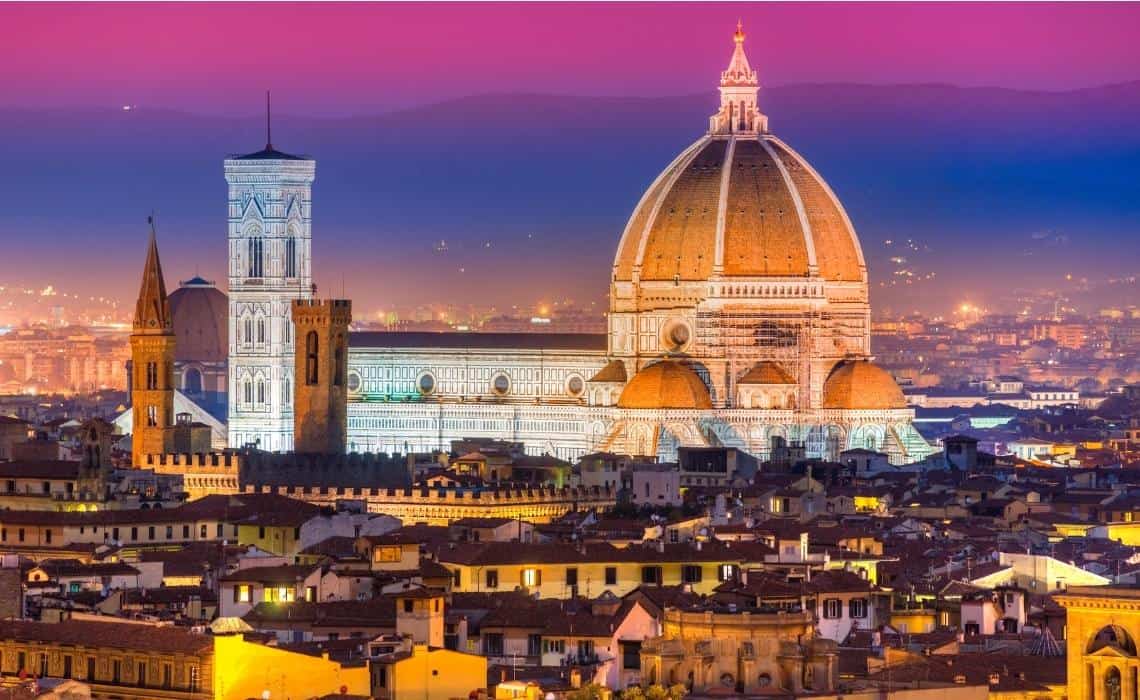 Florence is an easily walkable city, so no matter where you stay, you’ll never be far from the city attractions.

The 5 Best Areas to Stay in Florence

First-timers to Florence would do well to stay in the historical center of town in the Duomo neighborhood. Made up of the cobbled streets surrounding the imposing and impressive Florence Cathedral (duomo), this is the busiest part of the city. Prices here are generally more expensive than in other neighborhoods, but you’ll be well located to start our walking tours in Florence.

Further north is where you’ll find the San Marco neighborhood, right on the edge of the touristy center of town. It’s still within easy walking distance, but a little bit quieter and more affordable than accommodation right next to the cathedral.

Santa Croce is the neighborhood to stay for foodie travelers. Located to the east of the historic center, this authentic neighborhood is loaded with fantastic restaurants. It’s also a lively district after the sun goes down, with plenty of bars, lounges, and clubs to choose from.

Make your way south across the river, and you’ll arrive in Oltrarno. With the beautiful Palazzo Pitti and Boboli Gardens at its heart, this neighborhood is a great option if you want to stay outside the bustle of the center. Prices are affordable, and there’s a distinct local atmosphere to enjoy.

Finally, if you want to be close to the train station for plenty of day trips into the Tuscan countryside, your best bet is Santa Maria Novella. Located west of the historic center, this is one of the most affordable places to stay in the city. As you move further away from the city center, it also hides away plenty of hidden gems.

What to Eat in Florence?

With local produce flowing into the city from the countryside, and a host of chefs whipping up delicious traditional recipes, it’s impossible to go wrong in the Tuscan capital.

5 Must-Try Dishes to Eat in Florence

The city’s most famous dish is the succulent bistecca alla Fiorentina, otherwise known as Florentine steak. This large t-bone cut of meat weighs between 2 to 8 pounds, a massive slab of meat that’s fire-grilled and seasoned with salt, pepper, and a touch of lemon. Often, it’s cooked over roasted chestnuts, giving the meat a delicious smoky taste.

Literally translating to “reboiled,” ribollita is a thick Tuscan stew made from stale bread, tomatoes, beans, and any other leftovers that might be on hand. This dish has its roots in the poor medieval period, but today is one of the region’s most comforting meals.

Another historic dish to try in Florence is lampredotto. This sandwich features cow intestine that has been seasoned and boiled in broth. While it might not sound incredibly appetizing, it’s another staple peasant dish from medieval days and is surprisingly delicious. Find it at food carts and stalls around the city.

No trip to Italy is complete without a nice plate of pasta. Pappardelle al cinghiale is a thick, flat pasta covered in a meaty ragu sauce made from boar. It’s a specialty in the region, and the sauce can also be made from animals such as wild hare, goose, and rabbit. This is a rich dish that’s well worth trying on any trip to Florence.

And of course, the best way to complement all this delicious food is with some mouthwatering Tuscan wine. The regions surrounding Florence produce some of Italy’s most beloved and popular drops – it’s almost impossible to go wrong when ordering local.

Tipples on the Rooftops

Florence’s skyline is astounding, and there’s no better way to enjoy the cityscape than from one of the city’s rooftop bars. As the golden hour descends, take to the sky and enjoy a local wine or Aperol spritz as the city turns rosy gold. Most of the bars are part of a hotel.

The 5 Best Rooftop Bars in Florence

You might find gelato all over Italy, but Florence lays claim to some of the best in the country; the tasty and refreshing dessert was said to have been invented here during the Renaissance. Ask the locals where to find the best, and you’ll get a thousand different answers. Your best bet is to sniff it out on your own. Avoid the bright, colorful displays put on for tourists, and keep an eye out for the more subdued colors and gelaterias. It’s the perfect treat after a Florence city tour. 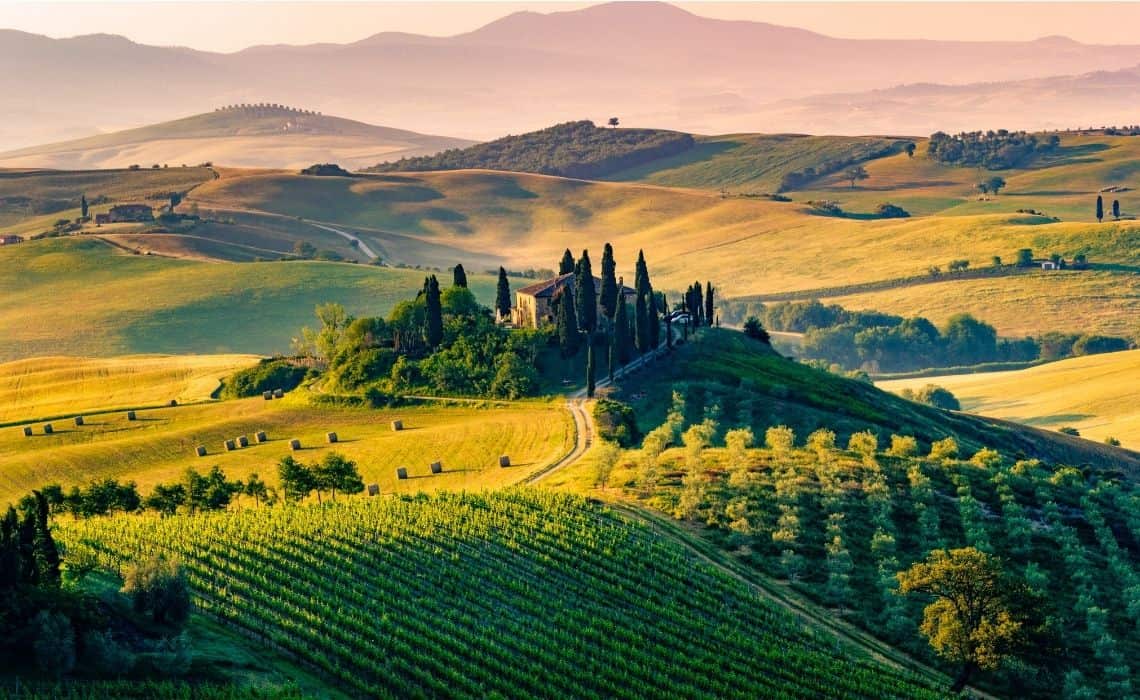 Just because Florence is so astounding doesn’t mean you shouldn’t explore the nearby villages and gently rolling hills. Cypress-lined country roads, medieval hilltop villages, and terraced vineyards dripping in a morning mist are only a few of the magical scenes you’ll encounter. And that’s not even mentioning any of the delicious, local food and wine you’ll enjoy. Day trips are an easy and enjoyable part of any stay in Florence.

From art to food to its unrivaled cityscape, we have no doubt that you’ll fall in love with the Tuscan capital. A self-guided tour of Florence is the best way to experience it for yourself, made easy with our tours below. 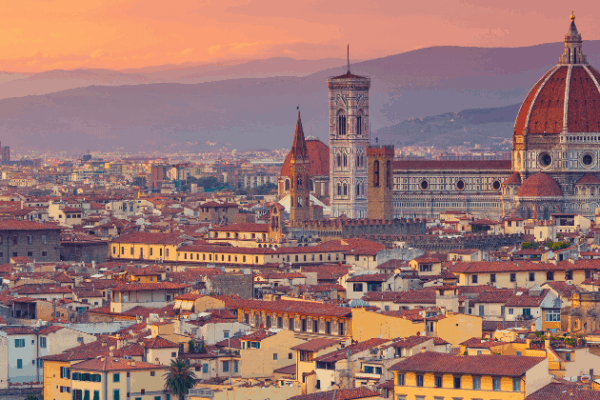 Hotbed of the Renaissance, Florence ushered in an age of artistic and architectural innovation, from the sculptures of Michelangelo to the gravity-defying dome of Brunelleschi that soars above the city’s world-famous cathedral. On this tour we will explore all the… 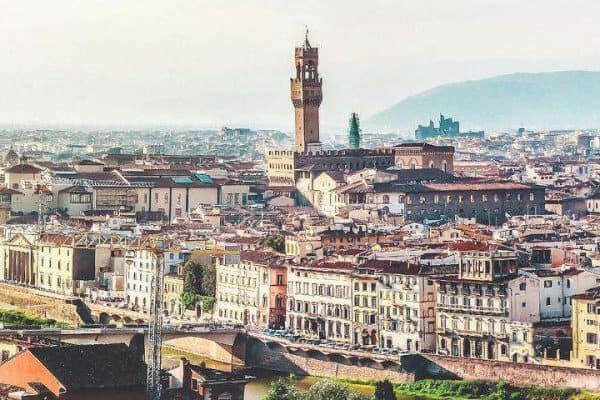 Our tour will guide you through the center of Florence in Tuscany and visit the most important sights of Florence's historical center.