The Best Self Guided Walking Tour of Venice | Sherpa Tours

A self guided walking tour of Venice is one of the best ways to discover the sights, sounds, and canals of The Floating City.

Venice is one of the most romantic and alluring destinations in Europe. Palaces, ornate buildings, and gothic churches sit atop a lagoon, spread across islands etched with canals plied by gondolas. The city is like a museum; you could easily spend your entire trip on the water, admiring the gorgeous architecture.

But it’s inside the buildings where Venice really comes to life. This city has a rich history as the heart of a vast trading empire, and the museums are suitably impressive. Also enticing are the art galleries hiding away a wealth of Venetian art and the remarkable churches with intricate interiors.

When you’ve worked up a hunger, you’ll quickly realize that the Venetians know how to put on a feast. The most popular way to indulge is to sample a range of cicchetti, the city’s take on tapas. Wander from bar to bar, sipping on wines and wolfing down different creations, before setting up at a waterside restaurant to sample the city’s incredible seafood.

Get your bearings in this magical city with our self guided walking tour of Venice before striking out to discover its art, palaces, and incredible beauty.

Although there aren’t any records, historians today widely agree that Venice first began around the 5th century AD. Refugees from Roman cities on the mainland were fleeing invading forces, retreating to the islands on the lagoon that make up Venice. As the population grew, so too did their need for more space. The inhabitants decided to drive wooden stakes into the ground, build platforms, and began to construct their buildings on top. From their outpost in Ravenna, the Byzantine Empire soon took control of the growing city. As soon as the Lombards conquered Ravenna, Venice installed its own Venetian Doge, or ruler, chosen by the wealthy merchant families that had emerged.

Expansion to a Trading Empire

Venice saw incredible growth from the 8th century onwards thanks to its strategic position and wily trade deals. Money poured in from both the Islamic world and the Byzantine Empire; Venice even struck a deal with the latter that saw the city’s merchants grow even richer. Soon, as the Byzantine Empire began to fade, Venice took control, using Crusaders to seize and sack Constantinople. A flourishing navy fleet also made Venice near-invincible, and they established a trade empire throughout the eastern half of the Mediterranean.

Centuries later, in 1453, Constantinople fell to the invading Ottoman Empire, which would continue to capture Venice’s trading outposts. The city’s power began to wane as new trade routes around the Horn of Africa were discovered, and Venice was regularly challenged by forces like the pope and the Turks. By the 17th and 18th centuries, Venice’s fearsome naval fleet was soon outgunned by the British and the Dutch, and their days as a trading power were well behind them.

The Kingdom of Italy

The Republic of Venice fell when Napoleon successfully conquered the city in 1797, forced into a pro-French democracy. Soon, the city would fall under Austrian rule; afterward, it passed between French, Italian and then back to Austrian rule. After a brief stint of independence, Venice finally was merged into the new Kingdom of Italy, of which it remains today.

Venice’s history is one of the most fascinating in Italy. Delving into this beautiful city’s story is a must while visiting; luckily, Sherpa offers the best walking tour of Venice there is. If you’re not in the destination but still want to try it out, our walking tour is also available as a Venice virtual tour, letting you discover the city from the comfort of home.

Where to Stay in Venice

The 5 Best Neighborhoods to Stay in Venice

San Marco is a fantastic choice for visitors to Venice. Home to the famous Piazza San Marco, this is the neighborhood where our walking tour of Venice takes place. Filled with canals, restaurants, bars, and the city’s most famous sights, this is the heart and soul of Venice as a destination. Winding through the labyrinth of streets reveals churches, intricate architecture, and of course, the romantic sight of gondolas plying the canals.

Across the river to the northwest of San Marco is where you’ll find San Polo, another central downtown area in Venice. It’s a neighborhood filled with history, more churches, restaurants, and bars, and it is within an easy distance of the main attractions of San Marco. Prices up here are also a little bit more affordable than across the river – but not by much.

Dorsoduro is the area further to the south, a large neighborhood that’s great for travelers of all types. There’s art, history, culture, food, and more to discover, all of it without the hectic crowds found in San Marco and San Polo. The area is also just a 15 – 20-minute walk to San Marco and the beginning of the tour.

Castello is the largest neighborhood in Venice, and as such, can be quite varied depending on where you stay. Its western edge borders San Marco, so if you’re staying closer to that side, you can expect more facilities for tourists, such as restaurants, bars, and shops. As you move closer to the eastern end, things start to feel more local and less overrun, with it turning into a residential-like area.

Finally, Cannaregio is in the north of Venice, a great spot to stay if you’re looking to save some money on accommodation. More affordable due to the distance from the city center, this area has a very local feel. Historically, it has been one of the last remaining bastions of local life as the city’s population has continued to decline. It’s relaxed, friendly, and filled with great restaurants and bars where you’ll rub shoulders with actual Venetians.

What to Eat in Venice?

Cicchetti is to Venice what tapas is to Spain. These small dishes of food are best enjoyed as a pre-dinner aperitif, with a big variety of different types. There could be deep-fried olives, slices of baguette topped with seafood or cured meats, or something else entirely. Each plate costs between 1 and 3 euros, meaning you can easily sample several dishes before sitting down for your main meal.

One of the mainstays of menus around Venice is bigoli in salsa. This simple pasta dish features a noodle that’s a little bit fatter than spaghetti, cooked in a rich and delicious sauce made from fresh sardines and onions. The seafood flavors are perfect for recharging after a Venice self guided walking tour.

Another seafood-based anti-pasta is the baccalà mantecato. This is a popular starter dish, where creamed cod paste seasoned with olive oil, salt, and pepper is spread on fresh bread. It can also sometimes be served alongside grilled polenta, another popular Venetian food. 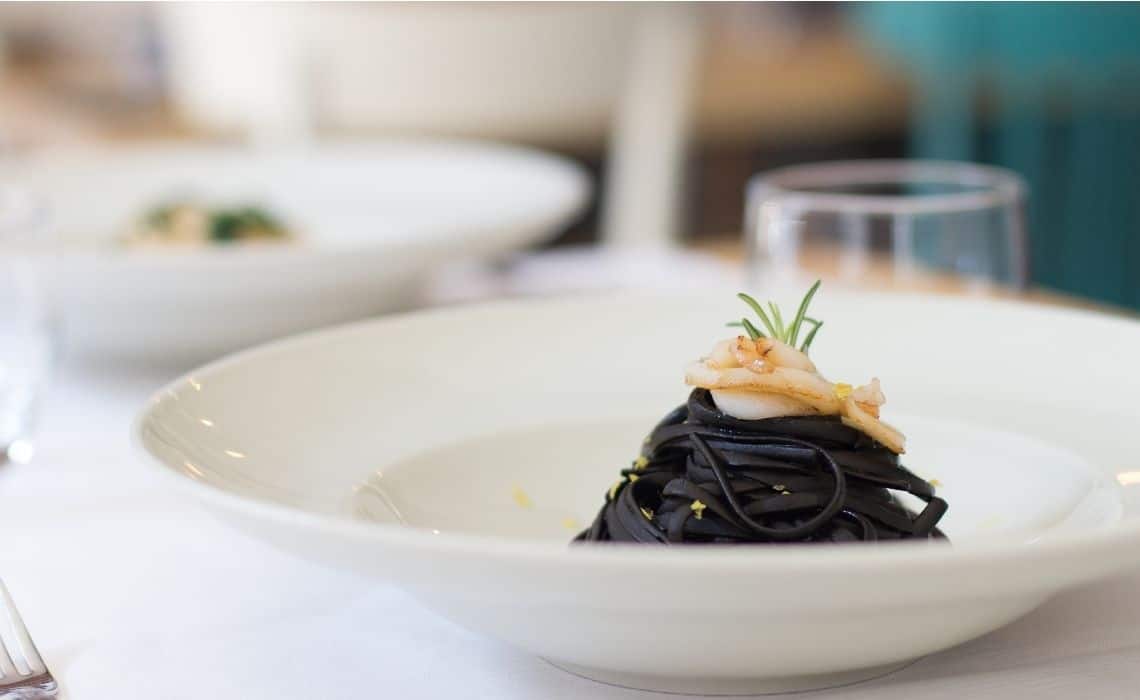 Daring foodies will want to try the spaghetti al nero di seppia, another seafood pasta dish. Squid ink is the star of the show, mixed in with wine, onions, and tomatoes to create a delicious sauce. The black can be off-putting, but the flavors are sensational. It’s also possible to find risotto al nero di seppia, as rice is a popular ingredient in Venice.

Finally, sarde in saor has been around since the Middle Ages and is one of the most popular dishes in Venice. Sardines are fried with onions and balsamic vinegar and then sweetened with raisins and pine nuts. It lives on today and is often found as either a cicchetti or a starter at restaurants.

The waterways and canals of Venice make it one of the most romantic destinations in the world. But every year, it slowly sinks into the ground, thanks to a combination of factors. The muddy lagoon on which it is built is by no means adequate to support such a city; groundwater was being pumped out from underneath the city, and the gradual rise of ocean levels worldwide all combine to make this destination one to see before it’s too late. 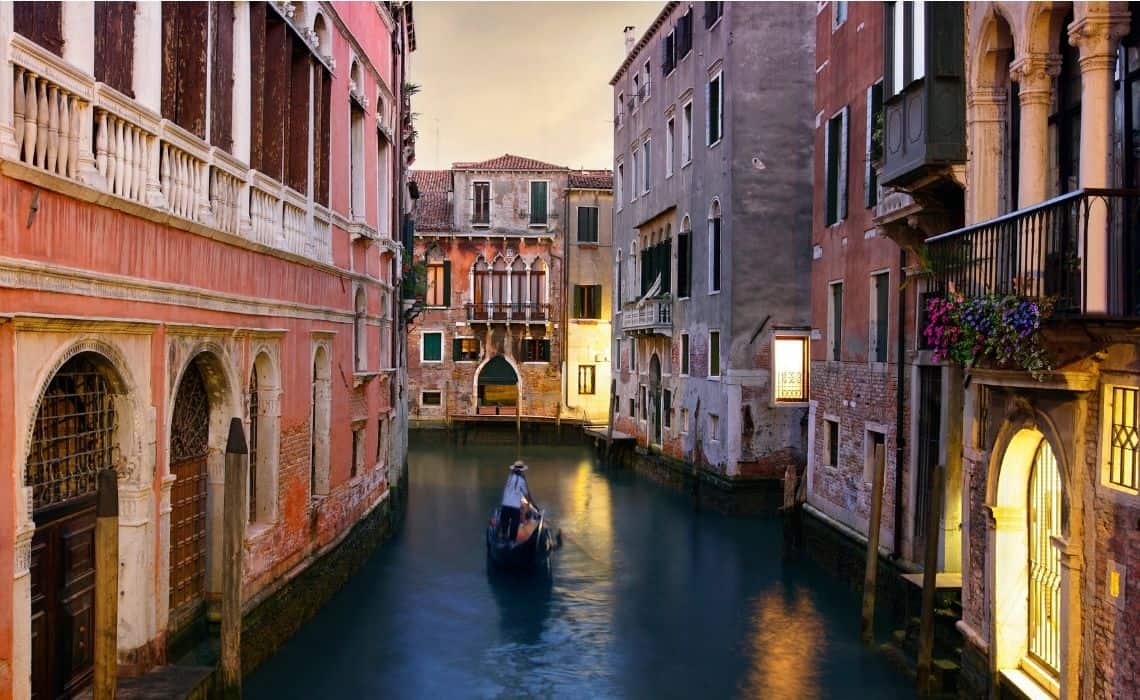 Enjoying a gondola ride on the canals is one of the classic tourist experiences of a trip to Venice. But there are a few things to know before you go. The first thing is that gondola rides are quite expensive; 80 euros for a daytime ride and 100 at night. Rides last 40 minutes, but a gondola can hold up to 6 people making the cost a little easier to bear. The Grand Canal is more crowded, so we recommend going for a ride in the quiet back canals of the city.

Venice has been hitting the headlines across the world lately, but for all the wrong reasons. Overtourism has become a big problem in the city, as over 100,000 visitors arrive each day, crowding around the main tourist areas. But there are ways to be a responsible traveler in Venice.

How to Be a Responsible Traveler in Venice

Venice is a wonderful destination in Italy and should be high on your bucket list of places to visit. For a wonderful introduction to this fabulous city, check out our self guided walking tour of Venice below. And remember, our app provides virtual tours of Venice as well. 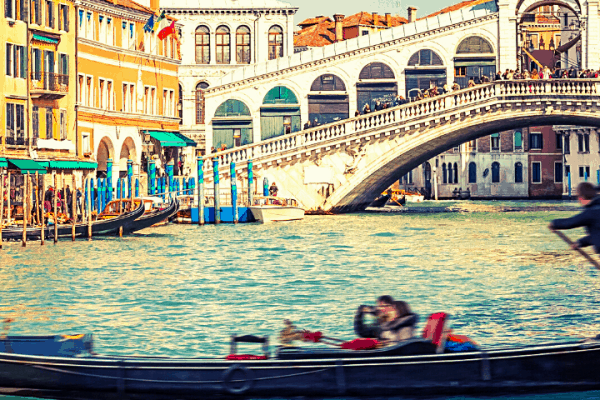 With its magnificent Grand Canal sweeping through the heart of a city whose fabric has remained much the same for centuries, Venice’s accompaniment of churches, palaces and artworks is an embarrassment of riches. Starting at the Venetian republic’s beating religious…