A walking tour of Milan is the best way to discover this elegant destination, its turbulent history, and wealth of art and architecture.

Elegant, sophisticated, and stylish, Milan is one of Italy’s most striking cities. A world away from its southern counterparts in Rome, Florence, and Naples, Milan is influenced more by Central Europe than the Mediterranean. As the financial and fashion capital of the country, Milan will challenge your preconceptions of Italy.

This destination boasts a long and turbulent history. Like many other well-located cities, it has been a highly coveted prize for empires, rulers, and religious powers over the years, each of them leaving a cultural legacy. After the unification of Italy in 1861, it quickly became the financial and industrial center of the country. Today, it’s also one of Italy’s most forward-thinking cities, with a booming tech and start-up scene.

Art lovers will find plenty of diversions in Milan, but nothing more so than the famed Last Supper by Leonardo Da Vinci. Galleries hold a wealth of works from the 20th century, while the city’s breathtaking architecture is also incredible. From the stunning il Duomo cathedral to the elegant Galleria Vittorio Emanuele II shopping gallery, walking around Milan will turn up plenty of pleasant buildings to feast your eyes on. To cap it all off, even the fashion here is a work of art, with the local Milanese showing us all up with the latest styles, tailored suits, and a grace that can’t be taught.

If there’s one thing that ties Milan to the rest of Italy, it’s the love of food. From aperitivo hours with plump olives, cured meats, cheese, and a classic cocktail, to the bounty of comfort food that makes visiting outside of summer a treat, the culinary culture here is world-class.

A walking tour of Milan is the best way to get acquainted with this stylish and classy destination.

Milan was first settled around 400 BC by a group of people known as the Insubres. The Romans took over a short time later, in 222 BC, coveting the strategic position of the settlement. As part of the Roman Empire, Milan grew into an important city of trade and commerce and would become the capital of the Western Roman Empire. Beginning from the 5th century, Milan underwent a torturous period of invasions and sieges and was destroyed several times. But this was just the beginning of the city’s turbulent history.

It wasn’t until around the 10th century that the city’s fortunes began to change, and Milan once again grew into a powerful economic center. But like the early days, Milan became hotly contested between civil and religious powers. The Holy Roman Empire took control of the city, but it continued to be fought for by many factions throughout the Middle Ages. Rulers would come and go in quick succession, but under it all, Milan continued to thrive.

A Renaissance Hub of Art and Culture

During the Renaissance, Milan became a hub for intellectuals, artists, and philosophers. During the 15th century, Leonardo da Vinci painted The Last Supper, today one of the world’s most recognizable paintings. In 1499, Milan was conquered by the French before falling under the rule of the Habsburg Empire.

Milan continued to pass between powers, from Napoleon to Austria. It was home to social movements by workers and revolutions by anarchists. World War I gave a period of stability, with the city’s industry booming, but afterward, uprisings once again threatened the stability. During World War II, Milan was occupied by the Germans but became the capital of the Resistance, an underground group opposed to Nazi rule. In 1945 toward the end of the war, Mussolini’s body was famously displayed in the city in April – the Allies had arrived to find Milan already liberated by Italian partisans.

With such a long and turbulent history, it’s important to get a handle on the history of Milan to understand the city today truly. Our Milan walking tour recounts the most vital points of this city’s story and is a great way to set yourself up with a foundation of knowledge before further explorations. It can also be done from the comfort of home – as a virtual tour of Milan, Italy. 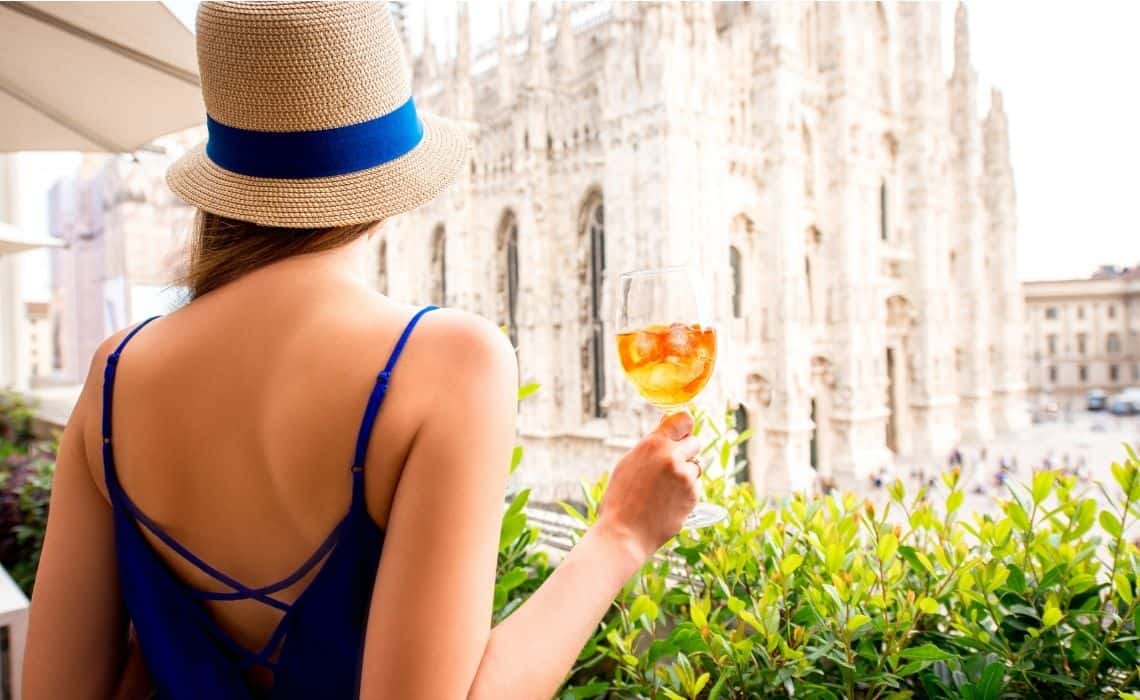 Where to Stay in Milan

The 5 Best Areas to Stay in Milan

For those who want to be in the middle of all the action in Milan, Duomo is the best area to stay. This is the immediate neighborhood surrounding the imposing cathedral, meaning you can walk outside and visit most of the sights in central Milan within minutes. As the city center, prices here can be more expensive than elsewhere, and restaurants too. If you only have a day in Milan, this is the neighborhood to stay.

A small neighborhood next to Milan’s fashion quarter, Brera offers something a little different to the city center. Known as the city’s artsy neighborhood, it has been called home by some of Milan’s most influential painters, writers, and intellectuals over the years. Today, it’s filled with galleries, pedestrian-only streets, and plenty of elegant architecture to enjoy. It’s a great area for those who like to wander without much of a destination in mind. 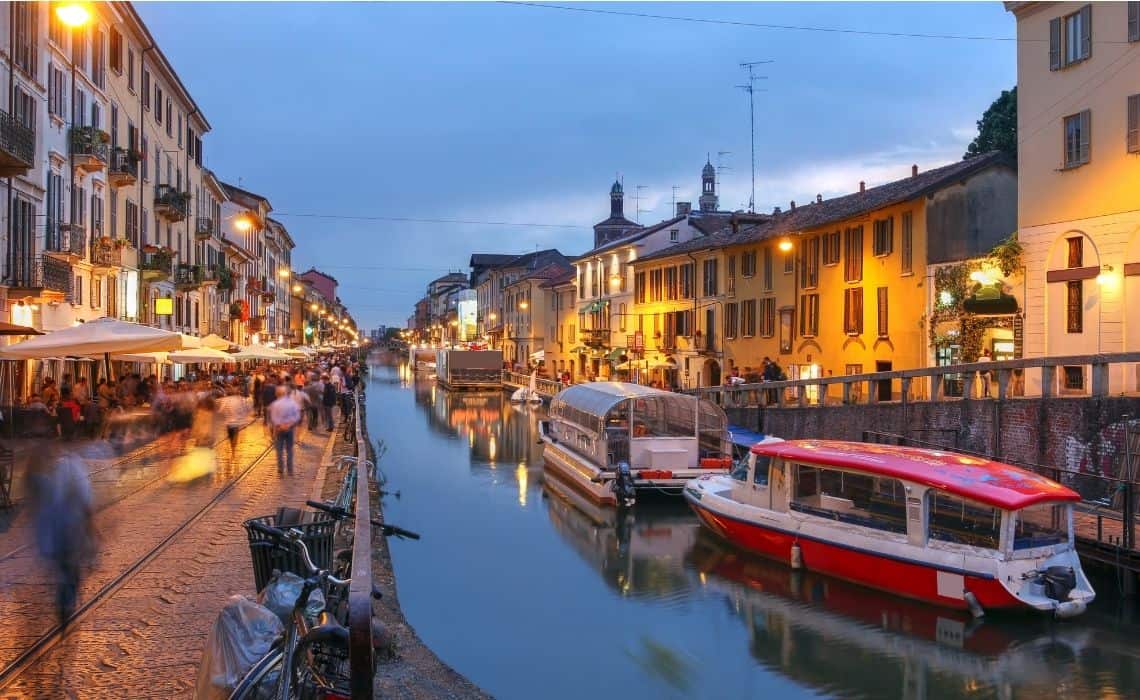 Lovers of nightlife will be most comfortable in the famed Navigli district. While Venice might be Italy’s most famous city on the water, this area has a few beautiful canals of its own. Lining the water is a bounty of cocktail bars, fine dining, and portside pubs, crowded with locals from aperitivo hour into the wee hours of the morning.

Porta Romana is a fantastic neighborhood to stay in for a taste of life as a Milanese local. Trendy restaurants, bars, and cafés line the streets of this area southeast of the city center. Locals are generally affluent and elegant, but the area retains its gritty edge – it’s safe to say that this is one of Milan’s up-and-coming neighborhoods. Yet, prices are still surprisingly affordable.

Finally, for something quiet, family-friendly, and laid-back, the neighborhood Fiera is a great choice. This area is Northwest of the city center, filled with leafy parks, café-lined streets, and unique boutique stores. Kids will love running around in the green spaces, and the city center is only a few minutes away on the metro.

What to Eat in Milan?

Milan’s most iconic and classic dish must be risotto. Italy is the biggest rice producer in Europe, and most of it is grown right outside of Milan. As such, there’s a wealth of delicious and creamy risottos on offer in the city. The most traditional type is risotto alla Milanese, with the addition of saffron. This adds a pop of yellow color to the rice, infusing it with that unmistakable flavor. If you only had one day in Milan, this is the dish you’ll want to try.

Ossobuco is another specialty dish of Milan, a hearty and comforting dish of meat and vegetables. A cut of veal is slow-cooked in a rich broth of red wine and loaded with vegetables like onion, carrot, and celery. The result is a tender cut of meat that falls of the bone. But the best part? The delicious marrow at the center of the bone.

The other star meat dish in Milan is Cotoletta. Another cut of veal, this time it’s breaded and fried in butter to form a crunchy crust, very similar to the schnitzel. The Milanese version keeps the bone in the cutlet and is served alongside fried potatoes and a salad. It’s the perfect meal for a brisk and chilly fall day in Milan.

More comfort food in the city comes in the form of minestrone Milanese. A classic all over Italy, what sets this version apart is the inclusion of rice in place of pasta. It’s also loaded with fresh vegetables, from cabbage and beets to spinach, tomatoes, and celery, all of it cooked slowly in a rich broth. In summer, it’s also served cold.

Finally, Milan locals are very serious about their polenta, another firm favorite dish in the city. This is boiled cornmeal, a meal that dates back to ancient Rome. Again, consistency is key here: too mushy or too stiff, and the dish is bland. But if anyone can get it right, it’s the chefs in Milan, striking the perfect balance between gooey and hard.

The Art of Aperitivo

There are few food experiences more quintessentially Milanese than going out for an aperitivo. Every day after work, locals flock to their favorite spot to meet with friends, clink glasses, and whet their appetite for dinner with a range of delicious snack foods. Popular drinks include a Negroni or Aperol Spritz, while food ranges from strong Parmigiano to prosciutto and olives. Generally, prices are fixed, getting you one drink and some finger food or a selection from a buffet. 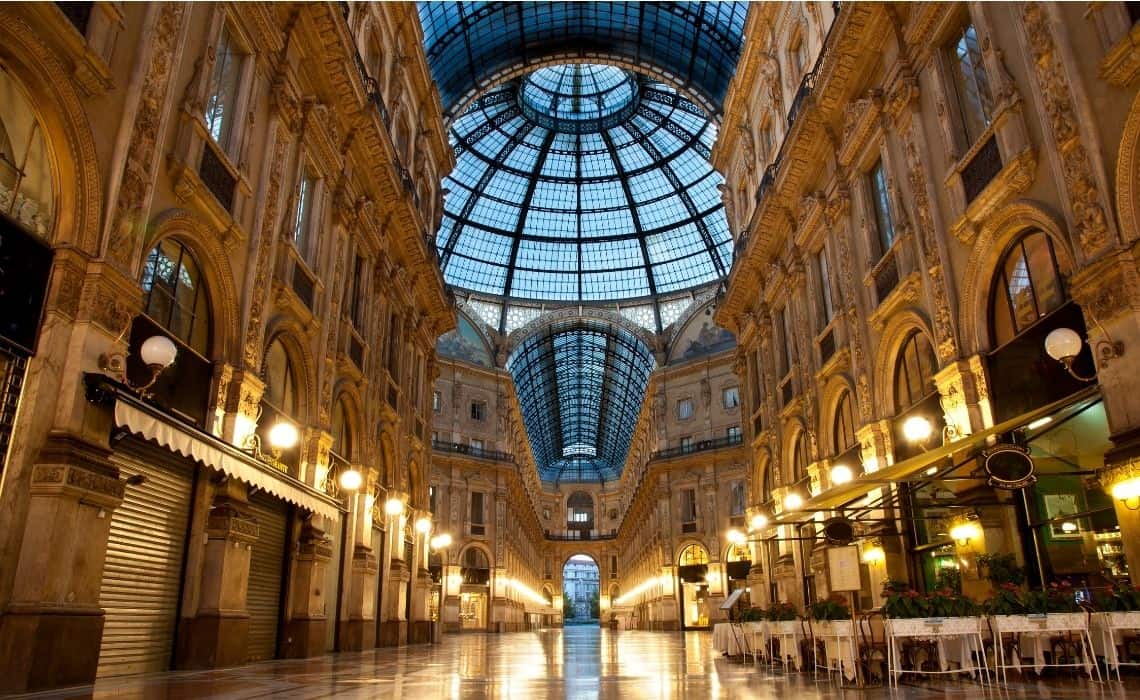 Milan is one of the world capitals of fashion – you’ll see well-dressed, elegant locals everywhere you go. However, if you’re keen to partake in a bit of high-end shopping, nothing beats the Quadrilatero della moda. This fashion quadrangle is a set of streets lined with the world’s most famous designer brands, boutiques, and glossy shops. If nothing else, it’s a sublime spot for some window shopping and people watching.

No trip to Milan is complete without a visit to this masterpiece by Leonardo da Vinci. Located inside the Basilica di Santa Maria delle Grazie, those who hope to see it will need to book a ticket in advance. Unfortunately, the painting is in a fragile state, even after extensive restorations – but no less impressive.

Discover the history, culture, and sights of this destination with our walking tour of Milan below. 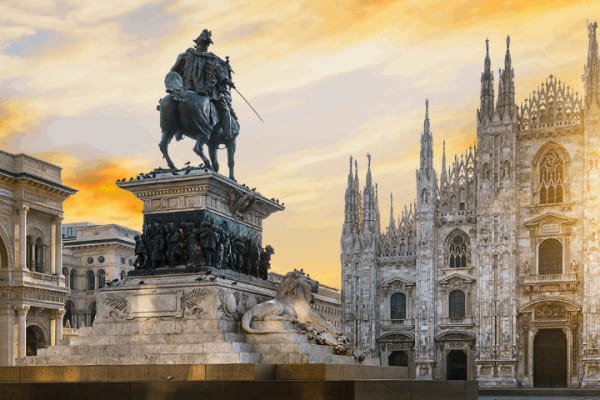 First time in Milan? Oh, you’re in for a treat! Considering that Milan is a relatively small city, its major landmarks are easy to cover on a single trip Take in the history of this city, from medieval to modern,…