Discover Sicily’s buzzing capital with a walking tour of Palermo, delving into the history and main sights in this gorgeous Italian city.

Sicily’s buzzing capital has long been an important crossroads. Its long and turbulent history has seen it change hands as civilizations battled for control of the ancient world, all of them leaving their mark on Palermo. Ancient palazzos rub shoulders with roman ruins and bustling souks, all with a timeless air; you could come back in 200 years, and things might still be the same.

The cultures have also left their mark on Palermo’s cuisine, with classic Mediterranean flavors mixed with ancient tradition. Passed down through generations, the delightfully simple meals lean on fresh ingredients that bring out the best of these Italian dishes. There’s pizza and pasta, of course, but often you’ll be sampling the delicious seafood on offer.

With gorgeous streets, a pretty harbor, and fascinating history, you’d be forgiven for never wanting to leave this destination. Discover it all with our walking tour of Palermo, which covers everything you need to know and the best sights in Sicily’s engaging capital.

Archaeologists have found evidence of human settlement in Palermo dating to prehistoric times. Prehistoric paintings and graffiti were discovered in 1953 in the Addaura grottoes, immediately jumping to the top of Sicily’s most important archeological sites. Phoenicians set up a successful trading colony in the 8th century BC, and the Ancient Greeks also arrived to colonize Sicily.

The Most Conquered City in the World

As Ancient Greece faded, Palermo became a hotly contested port city. From the Romans and Carthaginians to the Byzantine Empire and the Arabs, the city continuously changed hands for the first eight centuries AD. The longest and most successful reign was the Arabs, who turned it into one of the biggest cities in Europe at the time. It fell to the Normans in the 11th century, but the ruins, castles, and culture from the Arab period can still be seen today.

In 1861, Palermo and Sicily became a part of the Kingdom of Italy. The city began to expand outside its old city walls, and during this time, a lot of the Art Nouveau palaces were built. When World War II broke out, the city survived until 1943, when the Allies advanced across Sicily, heavily bombing the port and harbor area. Today, you can still see some of the destruction yet to be cleared away.

Struggles Against the Mafia

As Mafiosi families gained power, the Italian State had to share economic and administrative control of Palermo. As the population swelled in the city, the Mafia was behind much of the city’s haphazard expansion into the north. This uncontrolled urban growth helped the Mafia transform into an even more powerful organization. Palermo is still recovering from both the war and this period of unchecked growth, but tourism has helped it recover immensely into the city you see today.

The fascinating story of Palermo can be discovered in its entirety with our Palermo walking tour. If you’re not in Italy, you can also explore via our app, which offers virtual day tours in Palermo. 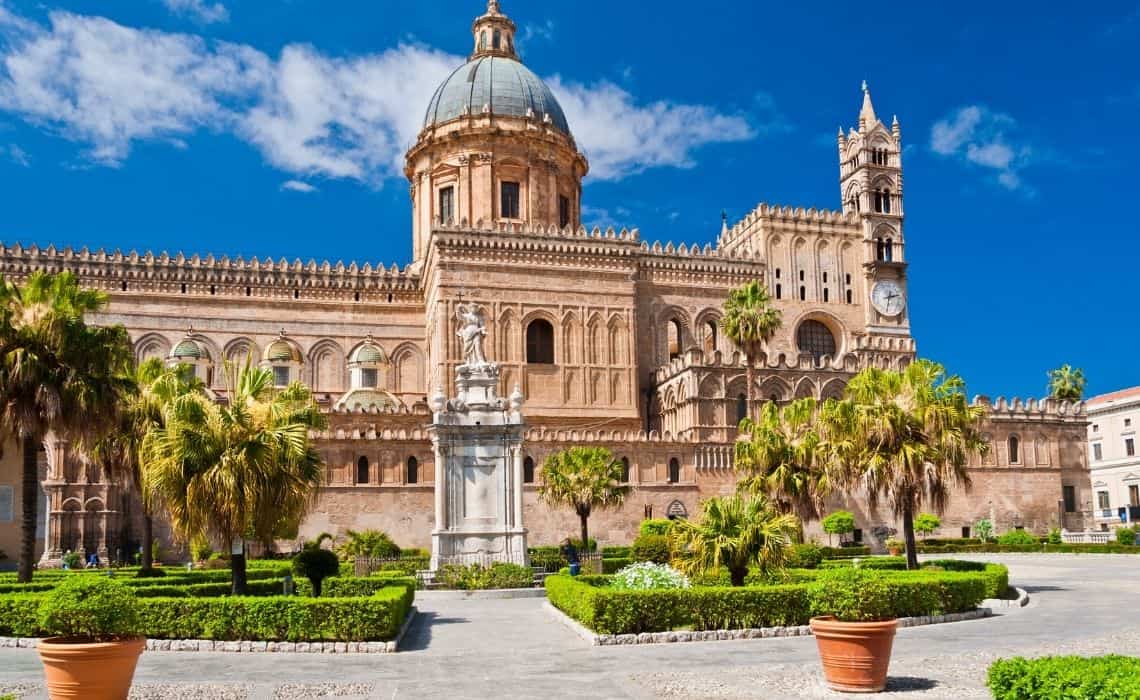 Where to Stay in Palermo

The 5 Best Neighborhoods to Stay in Palermo

La Kalsa is part of Palermo’s old town, a picturesque collection of streets lined with artisan stores, medieval buildings, churches, and more. It’s easy to explore on foot and takes no time to be in other parts of the city. There’s also a great selection of restaurants and bars to choose from when you’ve worked up an appetite after your walking tour.

For a more central stay in Palermo’s old town, look for accommodation in Monte di Pieta. Historic monuments congregate here in a breathtaking show of charm, architecture, and medieval times. It’s also a safe area of the city, making it a good choice all-round, and you’re still within easy distance of our walking tours of Palermo.

If you’re looking to stay in Palermo on a budget, we recommend checking out Mondello. North of the main city, it’s a bit separated from the rest of Palermo, so you’ll need either a rental car or to make use of public transport. However, staying here ensures peace, quiet, and tranquility (and the nearby beach is just divine).

Borgo Vecchio is a great choice for those after a bit of nightlife during their stay, as the area is filled with bars, restaurants, and cafés. Nestled between the port and Palermo’s more upscale residential areas to the north, it’s also within walking distance of the city center and its historic sights.

Finally, to the West of Borgo Vecchio is the family-friendly neighborhood of Politeama Liberta. Quiet, safe, and beautiful, it’s a good option if you’re traveling with kids to Palermo. Architecture lovers will enjoy the elegant buildings, while foodies will also get to sample some of the city’s most high-end restaurants without falling into any tourist traps.

What to Eat in Palermo?

For a true taste of Sicily while in Palermo, it’s essential to try spaghetti cozze e vongole. Simple and delicious, it’s a pasta dish loaded with mussels and clams, with ingredients carefully chosen to help amplify the seafood flavors—a delightful way to fill up after a Palermo self guided walking tour. 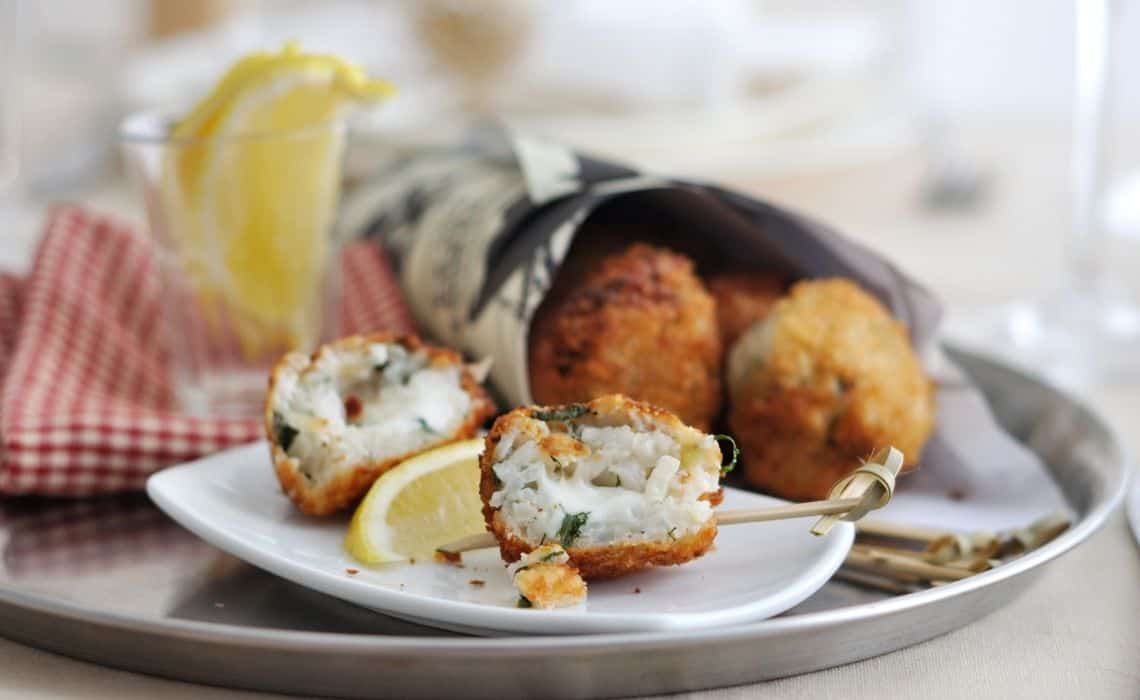 Arancini is a traditional food in Sicily and one of the area’s most recognizable dishes. It’s essentially a rice ball jam-packed with different meats, cheeses, and sauces, with various combinations depending on where you’re eating it. The ball is then baked or fried, melting the cheese inside into a gooey, delicious mess.

For dessert, it’s hard to say no to cannoli – Sicily is, after all, where this delicious pastry was first created. Traditionally, it’s a pastry stuffed with sweetened ricotta cheese, a decadent way to cap off any walking tour in Palermo. You’ll also find plenty of other creative additions as well, such as chocolate chips, candied fruit, or pistachios.

If you’re working up a hunger while touring Palermo, then it’s a good idea to pick up a pane con la milza. This street food is a sandwich served with chopped veal, most often the lung and spleen. The meat is boiled and then fried, and the sandwich can also be served with some ricotta on top. It might not sound appetizing, but it is a delicious option.

Finally, the seafood in Palermo is incredible. Its perch on the Mediterranean means that there’s plenty of fish, clams, mussels, prawns, and more, most of it often served in a dish of pasta. There’s also swordfish and sea urchin to sample, and a lot of octopus as well. Whenever you sit down at a restaurant, make sure to take a good look at the seafood options.

Sicily and Palermo have a strong reputation as the stronghold of the Italian Mafia, one of the most powerful crime syndicates in the world. Born in the 19th century, it’s commonly believed that the Mafia began in Sicily, who had a firm grip on the drug trade in Italy during the 20th century. Nowadays, their hold on Sicily has been shaken loose, although you’ll still find specialized ‘Mafia Tours’ that delve into this part of the island’s interesting history.

A Night at the Opera

Palermo is home to Italy’s biggest opera house, Teatro Massimo. Ballets and operas, dance troupes, and theater all happen here regularly, and catching a show while in town will be an experience you won’t forget. The interiors are incredible; this is one of the best places to visit in Palermo. There’s a reason why the final scenes of The Godfather III were based here. If you can’t catch a show, guided tours are offered daily and run for 30 minutes. 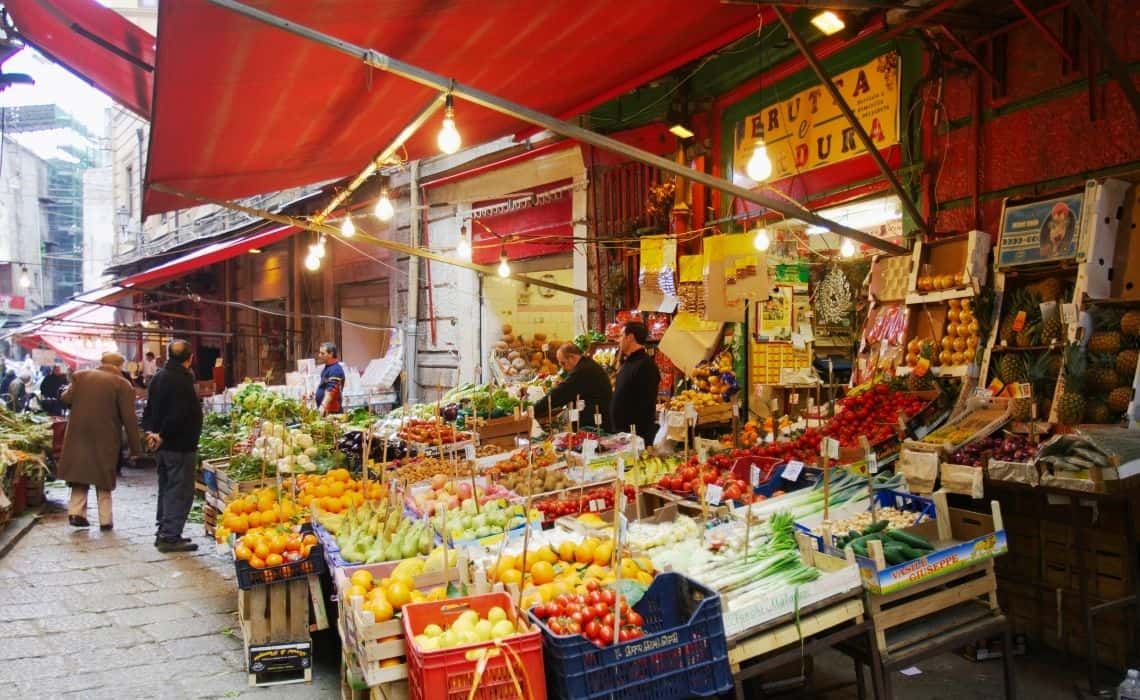 Part of why the food in Palermo is world-class is thanks to the abundance of fresh food markets to choose from. Chaotic, crowded, and noisy, these are places where you can get a good glimpse at local life as well as step into an Italy of old.

With a long and rich history, beautiful architecture and art, and a unique foodie scene, there’s a lot to love about Palermo in Sicily. Get your footing in this gorgeous Italian port city with our walking tour of Palermo below. 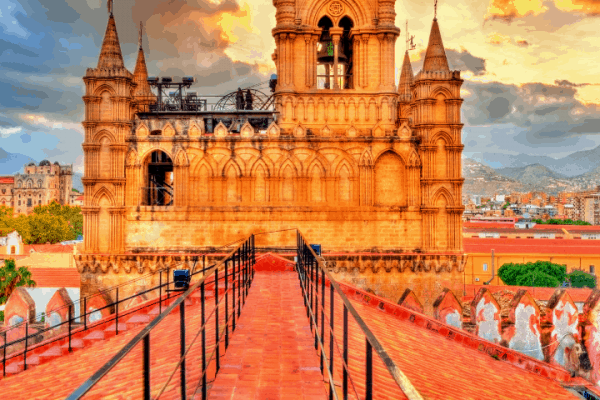 On our tour, we'll explore the historical center of Sicily’s bustling and lively capital city, Palermo. From medieval Arabic rulers to the invasion of Garibaldi and unification with Italy, the city - much like the island of Sicily - has…