The Best Self Guided Walking Tours of Barcelona | Sherpa Tours

Before your self guided walking tour of Barcelona, this article will set the scene for a visit to Catalonia’s vibrant capital.

The enchanting Mediterranean city of Barcelona is one of Europe’s most popular tourist destinations – and with good reason. Complete a self guided walking tour of Barcelona and discover a city of culture, fascinating architecture, history, and welcoming locals.

No trip to the city would be complete without visiting at least a few of the famous Gaudi buildings. The colorful modernist constructions sprinkled across the city really give Barcelona the flair it’s known for. The architect’s defining work, La Sagrada Familia, rises from the city, unparalleled in ambition by anything else in Europe.

But it’s not all about Gaudi here. The shadowy streets of the Gothic Quarter send you back to medieval times, with soaring cathedrals, mysterious cloisters, and cobbled lanes. Tug on the thread again and you’ll be thrown all the way back to Barcelona’s beginnings as a Roman settlement called Barcino. Crumbling walls, underground tunnels and ancient history can all be experienced on Sherpa’s Gothic Quarter tour.

For many, the main attraction of Barcelona is not its architecture, nor its history, but its feisty drinking and dining scene. Nights might start at a quiet tapas bar and end up at some of the busiest clubs in Europe.

By day, the socializing doesn’t stop. As you wander, admire the stylish locals as they sip on beers and wine and sample fresh seafood and tapas in sun-dappled squares. Welcome to Barcelona.

The History of Barcelona

Barcelona city has a long history, with the first human inhabitants dating all the way back to Neolithic times. But it was the Roman Empire who would begin turning it into the city you find today, arriving towards the end of the 1st Century BC. The city wall can still be seen in places, crumbling at the edges of the Gothic Quarter. Keep your eyes peeled as you stroll around on your self guided walking tour of Barcelona.

The Romans developed Barcelona into a buzzing capital city of the region, solidifying their position on the Mediterranean. But such a desirable location meant that it was a sought-after city, and soon the Visigoths would take it from the Romans. Later it was the Moors turn, before finally falling to Louis the Pious of The Franks in 801.

Joining the Crown of Aragon

The city would go on to join the Crown of Aragon in 1162, and steadily work itself into an important Mediterranean trading center during the Middle Ages. Thanks to a marriage of convenience, the Crown of Aragon, and Barcelona with it, was absorbed into the Spanish Kingdom in 1469.

The next big event that would set Barcelona on a new course came at the end of the 18th Century when the Industrial Revolution took off. The city turned into an economic powerhouse, and riches were made.

As time went on and more and more people poured in for work, living conditions became cramped and deteriorated. This would spark the city’s expansion with the creation of Eixample, the vast neighborhood that connected Barcelona to outlying towns like Gràcia and Sarrià, now neighborhoods of Barcelona.

Today, Barcelona has evolved into one of the most modern and forward-thinking cities in Europe. There’s plenty more to learn about Barcelona. To discover more of this info as you do a Barcelona walking tour, check out our augmented reality tour of Barcelona’s Gothic Quarter. And for the armchair travelers, our tours can be done from the comfort of your own home as well as on the ground in Barcelona.

Where to Stay in Barcelona?

The Best Barcelona Neighborhoods to Stay In:

Barcelona is a relatively small city that’s great for walking and cycling, meaning that you don’t have to stay central to enjoy everything there is to offer. Anywhere is the perfect spot to start a self guided Barcelona walking tour.

For those travelers who want to be in the thick of the action, you should look to stay in Ciutat Vella. This is the historic center of Barcelona, made up of four distinct districts: The Gothic Quarter, El Born, El Raval, and La Barceloneta.

There are plenty of things to do in the Gothic Quarter, from visiting historic tapas bars to admiring the impressive architecture. There’s also a wide variety of accommodation available, so there’s something for all budgets. 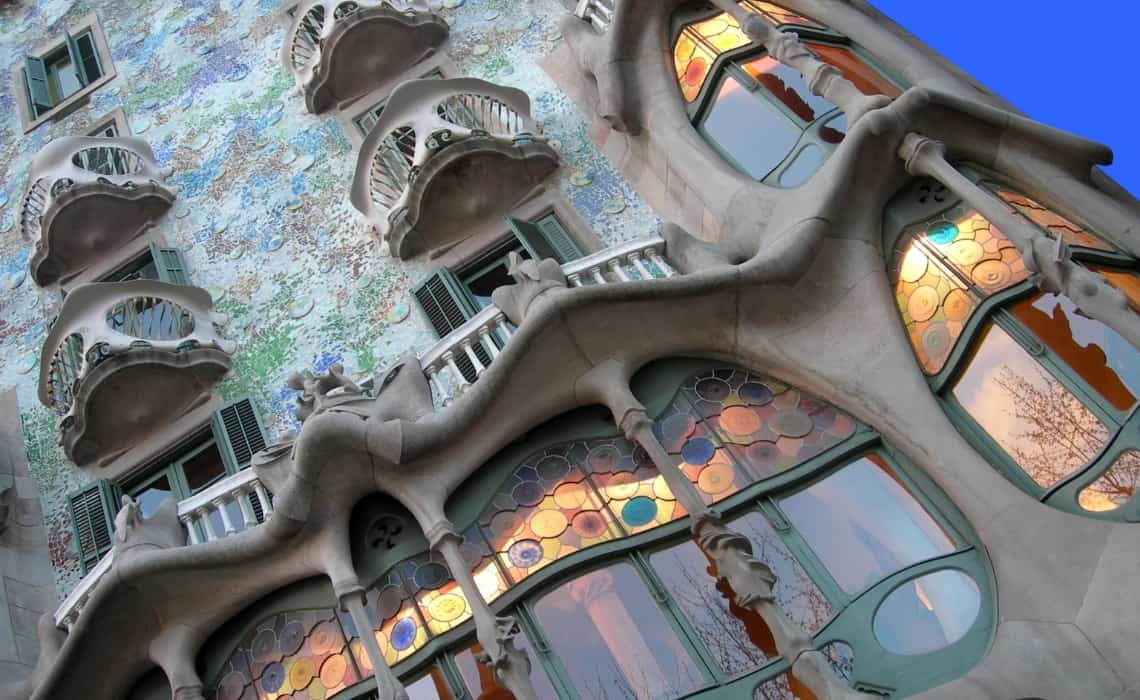 Further up in the city is where you’ll find the expansive neighborhood Eixample. This is a great spot to base yourself if you’re looking to do a self guided gaudi walking tour, thanks to the ease with which you can get around his most famous buildings (for those looking to do the Gaudi virtual tour, click here for more information). This neighborhood can essentially be split into two halves: the right (where you’ll find Sagrada Familia), and the left (closer towards Plaza España). Thanks to the beautiful architecture here, expect lots of high-end hotels and high prices.

For something more laid back and affordable, Gràcia is the perfect choice. Beginning at the top of the big shopping strip Passeig de Gràcia, this neighborhood has a lovely, village-like feel. Narrow streets and secret squares help it feel closed off from the rest of the city, and the area is filled with funky boutiques, local restaurants, and bars. You’ll also be close to the famous Gaudi buildings here, as well as the great Park Güell.

What to Eat in Barcelona?

The fun doesn’t stop after you’ve finished your self guided walking tour of Barcelona – in fact, it’s only getting started. Barcelona has a rich culinary scene, tempered by some of the world’s best chefs. From Michelin star restaurants to hole-in-the-wall tapas bars, the food in this city is in a league of its own.

Think fresh seafood plucked from the Mediterranean and thrown into a dish of paella, delicate slices of jamon gracing freshly baked bread with a side of olives, and hearty dishes of the famous patatas bravas (fried potatoes covered in a delicious spicy tomato sauce). The ingredients are simple, the flavors are bold, and sharing is best.

But Spanish food isn’t all that’s on offer. From Japanese fusion to Korean BBQ, Barcelona has bucketloads of international flair as well.

Outside of the restaurants and bars, foodies will love to visit the city’s neighborhood markets. From Sant Antoni to Sant Andreu, at the heart of each of Barcelona’s barrios is a local market, overflowing with fresh vegetables, fruits, meats, cheeses, olives, and plenty more. Pull up a stool at the market restaurants to have the fresh ingredients turned into wonderful tapas dishes in front of your eyes.

La Boqueria on La Rambla is the Queen of markets – you should visit it on your Barcelona walking tour. But there’s plenty more scattered around the city waiting to be discovered. 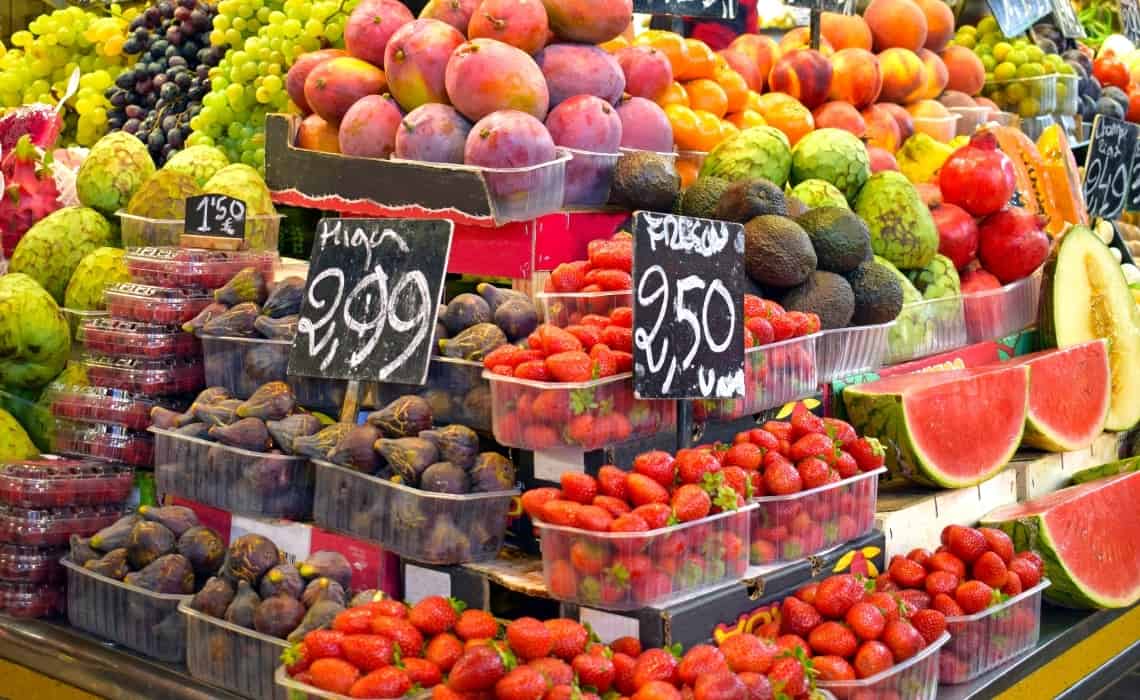 The Best Markets in Barcelona:

Brunch is best enjoyed in Sant Antoni, where Carrer del Parlament has turned into a hipster haven. For seafood, head to Barceloneta, the old fishing neighborhood by the sea. For more upscale dining, there are endless restaurants in Eixample and Gràcia. You’ll also spy plenty of inviting restaurants on your Gothic Quarter tour as well.

Scratch under the surface of the city and you’ll find plenty to do after you’ve finished your self guided walking tour of Barcelona.

The Art of Vermouth

Over the past decade, a new trend has emerged that looks like it’s here to stay, and that’s vermouth. And no, this isn’t the drink you’re thinking of. In Barcelona, vermouth is a specially made fortified wine, infused with aromatic herbs and served cold with a slice of orange and anchovy olive.

While it has been around for ages, it’s only recently started to become popular again. Locals usually meet up for a vermouth before lunch, using it as an aperitif and paired with some snacks like a plate of crisps, canned seafood, or some other kind of tapas. But for visitors, it’s possible to have a tipple of vermouth at any time of the day – it’s delicious enough for all hours. The perfect treat to restore your energy after a self guided Barcelona walking tour.

Pintxos from the North

Another trend sweeping Barcelona is a Basque tradition from Northern Spain: pintxos. These are delicious bite-sized tapas dishes, served on a slice of bread and held together by a long skewer.

Toppings range from salmon and cream cheese all the way to elaborate creations using prawns, croquets or calamari. You’ll immediately recognize a pintxo bar just by looking inside – all the food is prepared and laid out on the bar.

Tradition demands that you grab a plate and pile it with what you like. But make sure to keep the skewers for the end, since they denote how much you’ll owe. A popular destination for pintxos is Carrer de Blai, a long pedestrian street in the Poble Sec neighborhood lined with the city’s best pintxo bars.

Another change that’s occurring in the city is the addition of what are known as ‘Superblocks’. This is an initiative started by the government to give space back to the Barcelona residents.

The plan includes narrowing streets down to single lanes and restricting traffic flow, freeing up wider pedestrian spaces. The aim is to increase the quality of life in Barcelona; from health benefits to the level of noise that seeps into the apartments.

There are already 6 superblocks in the city, with over 500 more scheduled for construction within the next decade. For a taste of this new life, head to the Sant Antoni superblock. It’s here where you’ll find loads of life in the streets, and the sign of things to come.

As you can see, there’s plenty to see and do in Barcelona. Luckily, our tours can guide you through this enchanting city, setting you up for further explorations. Whether you’re at home doing the Barcelona virtual tour or in the city following along with the Barcelona GPS tour, you’ll learn a whole lot about one of Europe’s most famous cities. 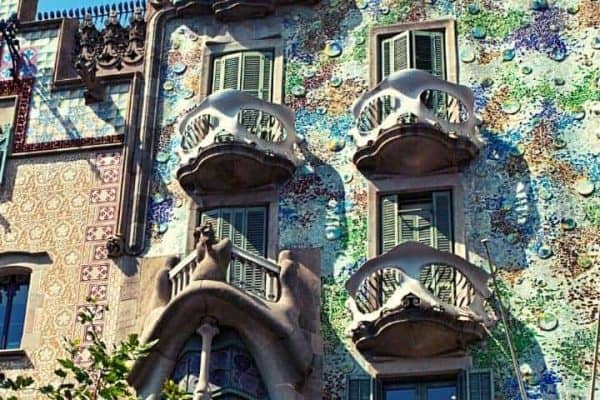 Barcelona: Gaudi and the Block of Discord 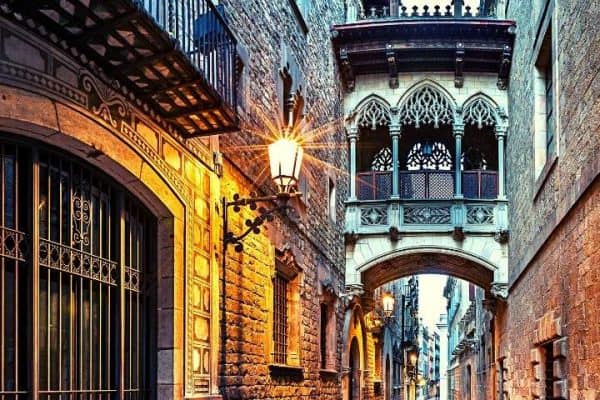 On our tour, we’ll explore the oldest quarter of Barcelona. We’ll learn about its transformation from its 230 BC origins as a Roman city to what we now see today: the Gothic Quarter. We’ll explore the Roman borders of the…