A walking tour of Belfast is a fantastic way to get to know the vibrant culture and tragic history of Northern Ireland’s capital.

Having emerged from its troubled past, today, Belfast is one of the most vibrant cultural hubs in the entire United Kingdom. As the capital of Northern Ireland and the biggest city in the country, it’s also making a splash on the international stage. It is a serious contender for an extended city break. Arts, culture, live music, and a feisty nightlife combine, spurred on by a young and intelligent population looking to steer the city away from its tragic history.

But of course, for those that go looking, that history is easy to find. “The Troubles” is the name of the 30-year civil war that took place in the streets of Belfast, a political and social battle of terrorist attacks and shootings that made headlines around the world.

Today, exploring the legacy of this war through colorful murals in West Belfast is still one of the most popular tourist activities in the city. But it isn’t the only history on offer. Belfast is also the place where the ill-fated Titanic was constructed. Its history is another big draw to the city explored in the city’s aptly named Titanic Quarter.

Get too caught up in the past, though, and you’ll miss what’s happening in the present. Belfast is a young and fun city with an infectious energy that is easy to get swept up in. There’s fantastic nightlife, from Victorian-age pubs to classy cocktail bars and cutting-edge restaurants experimenting with new-age Irish cuisine. And that’s not to mention the countless artists and musicians who make their home in the city.

But the best part about Belfast is the locals. Charming, friendly, and welcoming, it’s the people here that have turned this city into one of Europe’s most vibrant and fun destinations.

A walking tour of Belfast will help you discover the unique character of this city, setting you up for further explorations of its tragic past and energetic present.

Thanks to the discovery of The Giant’s Ring, a 5,000-year-old henge near Belfast, we know the area has been occupied since the Bronze Age. Iron Age forts on the hills surrounding the region also hint at the area’s past, although on all accounts, Belfast was nothing more than a quiet village for a long time.

In the 17th century, Belfast began to develop, but the 19th century is known as the golden age around these parts. It was then when the city established itself at the center of all linen production in the world. As the industrial revolution progressed, the city was turning into an economic powerhouse, with the waterfront becoming a hub of shipbuilding in the UK.

Construction of the Titanic

It was in those shipyards where one of the boating world’s most tragic stories began: the Titanic. As demand for travel between Europe and North America grew, construction on the biggest man-made vessel started in earnest. Of course, we all know how the story ends, but discovering the how and why of it all is a fascinating trip back in time. Today, it’s all best explored in the aptly named Titanic Quarter, home to the impressive museum Titanic Belfast that goes into all the details you never knew you wanted to know about the Titanic. 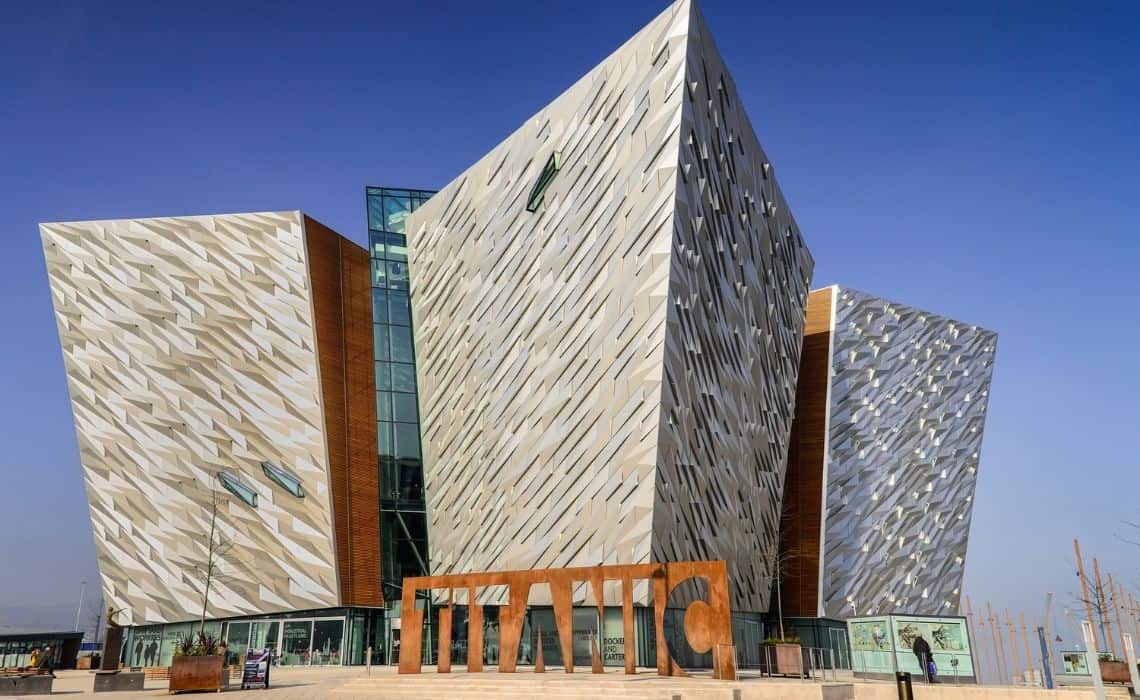 Belfast was the epicenter of a 30-year-long civil war in more recent history, dubbed ‘The Troubles.’ During this period between the late 1960s and the late 1990s, the city was at war. Two opposing sides fought over whether to remain in the United Kingdom or leave and join the Republic of Ireland, with terrorist attacks rocking the city and shocking onlookers around the world.

This last point is what’s covered in-depth on our Belfast troubles historical walking tour. For those who aren’t in the city, it’s also available as a virtual tour, letting you discover the city’s past from the comfort of your home.

Where to Stay in Belfast

Belfast is one of the cheapest destinations in the United Kingdom, letting you stay central without breaking the bank. It’s also a wonderfully compact city and easily walkable.

The 5 Best Neighborhoods to Stay in Belfast

For first-timers in the city, staying in Central Belfast is a great choice. This is the historic old town, filled with the city’s sights, restaurants, pubs, bars, and shops. Many of the streets have been pedestrianized, making it a pleasure to walk around and discover the character of this wonderful city.

South of the city center is the Queens Quarter, a quiet area for a more laid-back stay. Home to the Queen’s University, this quarter is young and trendy. The easily walkable streets are home to vintage stores, trendy cafés, and plenty of great bars with entertainment like quiz nights and karaoke. Prices here are also great for budget travelers.

If you’re excited to discover the vibrant culture and art scene in Belfast, you’d do well to stay in the Cathedral Quarter. Lying to the north of Central Belfast, this area is home to the city’s incredible cathedral. Cobbled streets are lined with lots of attractions, leading all the way towards the revitalized waterfront area.

The Titanic Quarter is one of the most popular areas to visit in Belfast. This was where the area’s namesake ship was constructed, which would go on to sink a year later in the Northern Atlantic. The area, of course, contains the Maritime Museum where you can learn about the vessel and so much more. The quarter has been the focus of the city’s waterfront regeneration scheme, with museums, attractions, restaurants, bars, and cafés.

Finally, a little bit to the west of the city center is the Gaeltacht Quarter. This is the most convenient area to stay to complete our Belfast troubles walking tour. It was here where most of it took place, an area now filled with powerful murals that depict the events of the war. Despite the dark history, the area also boasts strong feelings of optimism for the city’s future.

What to Eat in Belfast?

The 5 Must-Try Dishes in Belfast

An Ulster Fry is the perfect way to start your day in Belfast. Think of it as Northern Ireland’s answer to the full English breakfast. There’s bacon, sausage, and eggs, but also white and black pudding, soda bread, and potato bread. Add in an ‘Irish coffee,’ and you’ll have no trouble walking across town.

For those blustery days in the city, an Irish Stew will hit the spot and warm you up in no time. Comforting and hearty, it’s a simple dish containing local lamb, potatoes, onions, and carrots. You’ll get bread and butter to mop up what’s left of it at the end of your meal as well. Pair it with a pint of local beer, and you’ll be feeling fantastic.

For something on the go, nothing beats a good old pastie. This delicious morsel is minced meat, potato, and onion, mixed, dipped in batter, and deep-fried. They’re sold at chippers (fish and chip shops) around the city and are a great meal to enjoy after a Belfast self guided walking tour.

Of course, thanks to its position near the North Atlantic, Belfast is home to an abundance of fresh seafood. From oysters (some say the best in the world) and prawns to king crab and delicious mussels, there’s plenty to love. Not to mention all the fresh fish that flows into the city every day, best enjoyed as the classic dish of fish and chips. To get a closeup of your food before it’s cooked in a restaurant, check it out for sale at St. George’s Market.

Although not a food, enjoying a pint of Guinness while in Northern Ireland is essential. This dark stout beer has become synonymous with the country, a dense and bitter drink with notes of caramel. It’s been around since the late 18th century and is steeped in tradition. For instance, did you know that a proper Guinness should be poured for about 119 seconds? Good things come to those who wait.

The Nightlife in Belfast

Drinking is a big part of Northern Irish culture, and with Belfast slowly coming out of its shell, the city’s nightlife has come into its own. Whether you’re keen to spend a night in a cozy pub or are after a young and trendy cocktail bar, there’s always something to do. The Cathedral Quarter is where it mostly goes down, which is often compared with Temple Bar in Dublin.

A lot of the drinking venues will also have live music on as well. Whether you’re looking for your next favorite indie group or are just after some covers of a troubadour, Belfast has a wealth of options. Here are some of the best venues for a night of mighty craic:

5 Bars and Venues for Live Music in Belfast 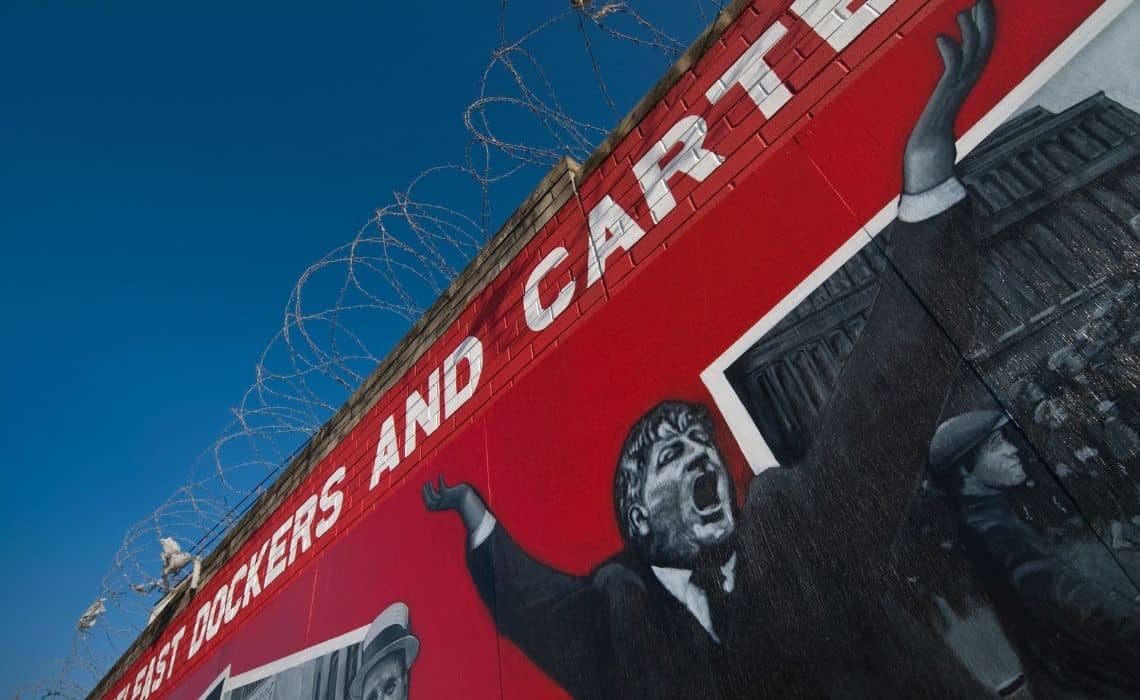 While the murals of Belfast display the political history across the city, lately, street art in the city has taken a turn. Contemporary murals often focus now on other troubles around the world, from the Spanish Civil War to the war in Iraq. Wander around the city, and you’ll likely turn up plenty of murals that aren’t included in official Belfast mural tours, all of them taking a powerful message. 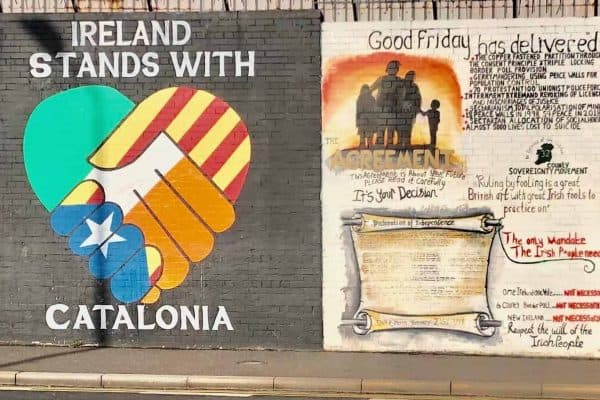 No trip to Belfast is complete without an exploration into her sinister history. While the city and the country as a whole is now at peace, with a thriving culture and arts scene, bustling nightlife and wicked sense of humor,…