A Machu Picchu hiking tour will let you strike right to the heart of this world wonder, a fascinating relic from the old world.

One of the seven wonders of the world, Machu Picchu is a destination that will exceed your expectations. Perched high in the Peruvian Andes Mountains, this vast Inca citadel is one of the most stunning sights in the world.

Shrouded by mist and steeped in mystery, the air of mystique at this site connects you with the ancient world. From its terrace cut into the mountainside to temples of worship, nowhere else captures your imagination quite like these ruins. Today, historians are still theorizing about its role in the Inca Empire. Was it a royal retreat, or a city of agricultural farmers, or a tribute to the celestial bodies the Incas worshipped? The mystery of it all only adds to the experience.

What’s more is that there’s no record of Machu Picchu from the Spanish, who conquered the Incan Empire during the 16th century. The citadel was abandoned for reasons unknown and lost to all but a few. Its position is protected from prying eyes by jagged peaks and cloud forests; it was only rediscovered in 1911 by an American explorer. The fantasy-like location is an incredible setting for such a site.

In 2018, authorities changed the entrance regulations from an all-day visit to morning and afternoon sessions. As such, planning and preparing are more important than ever before. Read on to discover all there is to know about the site and our Machu Picchu hiking tour.

To delve into the history of Machu Picchu, it’s necessary to investigate the culture that constructed it. The Incan Empire was the largest civilization in the Americas pre-Columbus, rising to power sometime during the 13th century. Originating out of the Peruvian highlands during the 15th and 16th centuries, the Incans conquered and peacefully assimilated a large swathe of western South America.

The Construction of Machu Picchu

Historians and archaeologists have dated the construction of Machu Picchu back to the 15th century. Theories about what exactly it is still abound: many believe it to be a royal retreat and sanctuary for Emperor Pachacuteq and his court. At its height, it’s estimated that somewhere between 300 and 1,000 people lived in the citadel, hidden from prying eyes by the surrounding mountain peaks and cloud forest.

In the 16th century, the Spanish arrived and slowly began conquering the Incan empire. At some point in the fighting, Machu Picchu was abandoned. It could have even been abandoned before the Spanish arrived during an Incan civil war. Whatever the case, it was never mentioned in the records of Spanish conquistadors and remained a secret for almost 400 years to everyone but the local farmers and nearby townspeople.

Machu Picchu was ‘rediscovered’ by the rest of the world in 1911 when American explorer and archaeologist Hiram Bingham stumbled across the ruins while searching for another Inca city.

A scientific study of the ruins backed by Yale University began soon after, and then pictures were published that sparked a growing interest in the archaeological wonder. The ruins were marked as a UNESCO World Heritage Site in 1983. 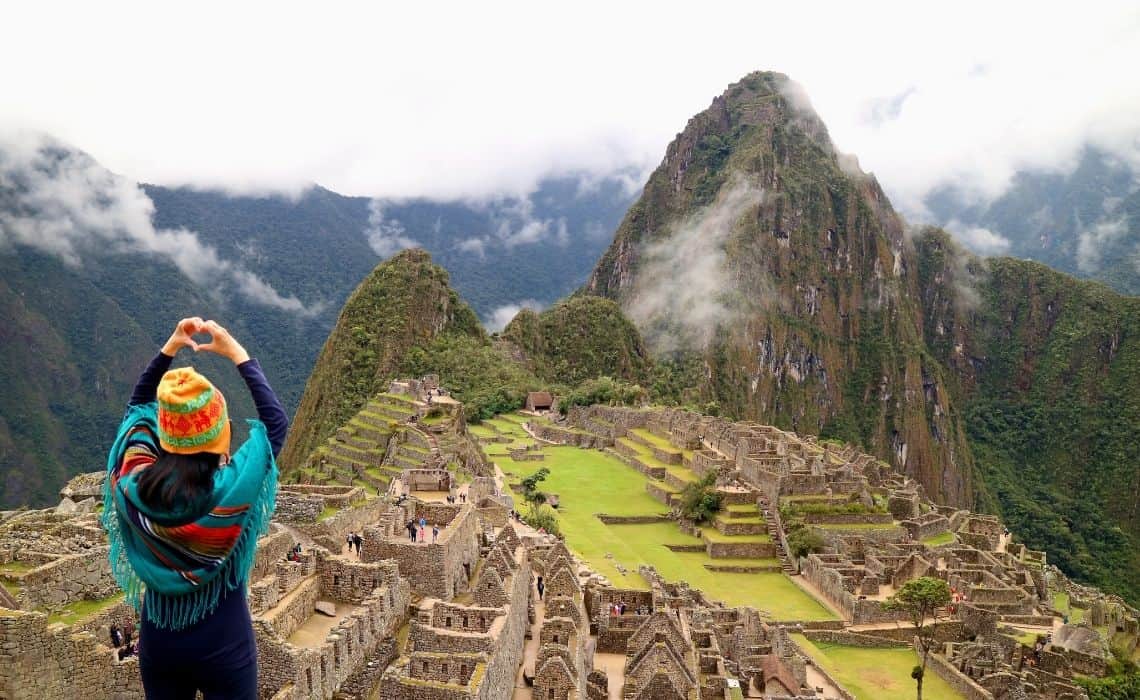 There’s still so much information that isn’t known about Machu Picchu; the citadel is steeped in myths. Our Machu Picchu walking tour below delves into the history and engineering of the city. The tour is also available as a Machu Picchu virtual tour, letting you discover the fascinating citadel from the comfort of home.

Where to Stay When Visiting Machu Picchu

A Machu Picchu excursion will more than likely involve at least one night in the town of Aguas Calientes. It is the main town near the ruins and is regularly referred to as Machu Picchu pueblo. Although it’s heavily geared towards tourists with expensive accommodation and food, it also lets you get into the ruins as early as possible, beating out the Machu Picchu walking tours that leave from Cuzco.

There are a few nearby destinations that you should visit as well while you’re in the area. Spending a few days at a higher altitude will also help you acclimate to this region of the world.

As the oldest continuously inhabited city on the entire continent, Cuzco is an amazing place to visit for a few days before or after seeing Machu Picchu. Featuring cathedrals and stunning Inca ruins scattered throughout cobbled streets, it’s one of Peru’s most magical destinations. Museums also delve into the Inca culture, giving you even more insight before or after a trip to Machu Picchu. 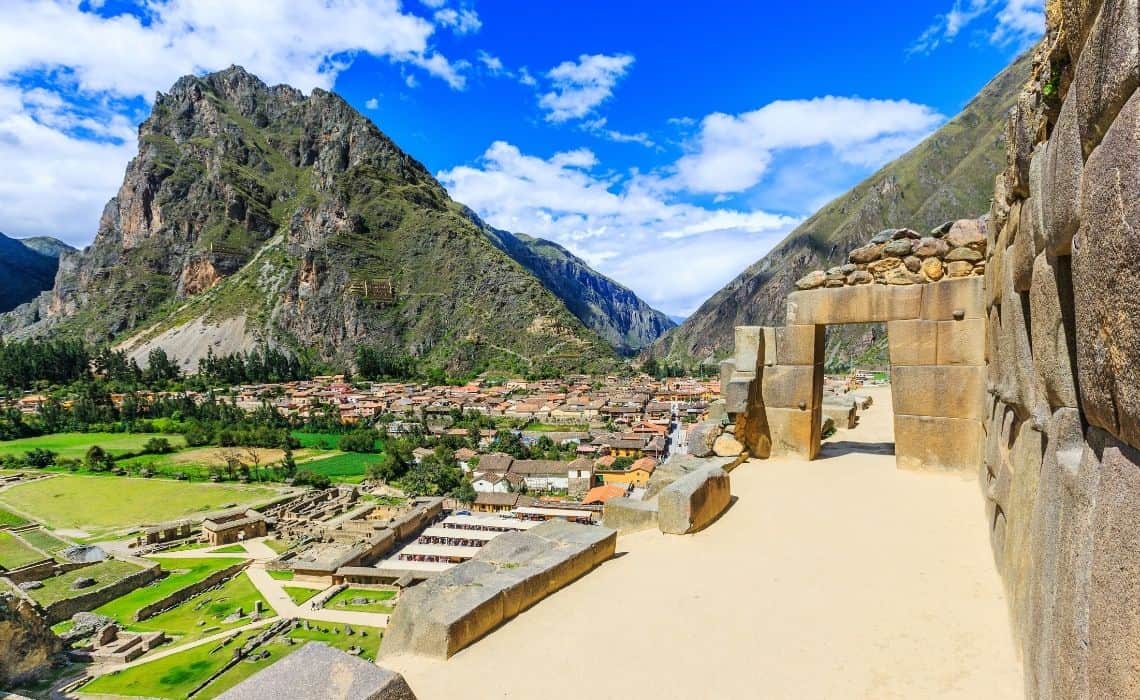 A night in the town of Ollantaytambo is highly recommended. Rising above this quaint village is another set of impressive Incan ruins. The steep terraces are well worth exploring; after mid-morning, most other tourists make their way to Machu Picchu, leaving the entire area almost deserted.

What to Eat in Peru?

One of the most famous dishes born in Peru is ceviche. Eating this dish in the country is unlike anywhere else, thanks to the fish being marinated in a variety of lime that only grows in Peru. Chefs in the country swear that it contains the perfect acidity for a ceviche. There’s an almost endless variety of toppings that come served with it, depending on whether it’s a starter or your main meal. 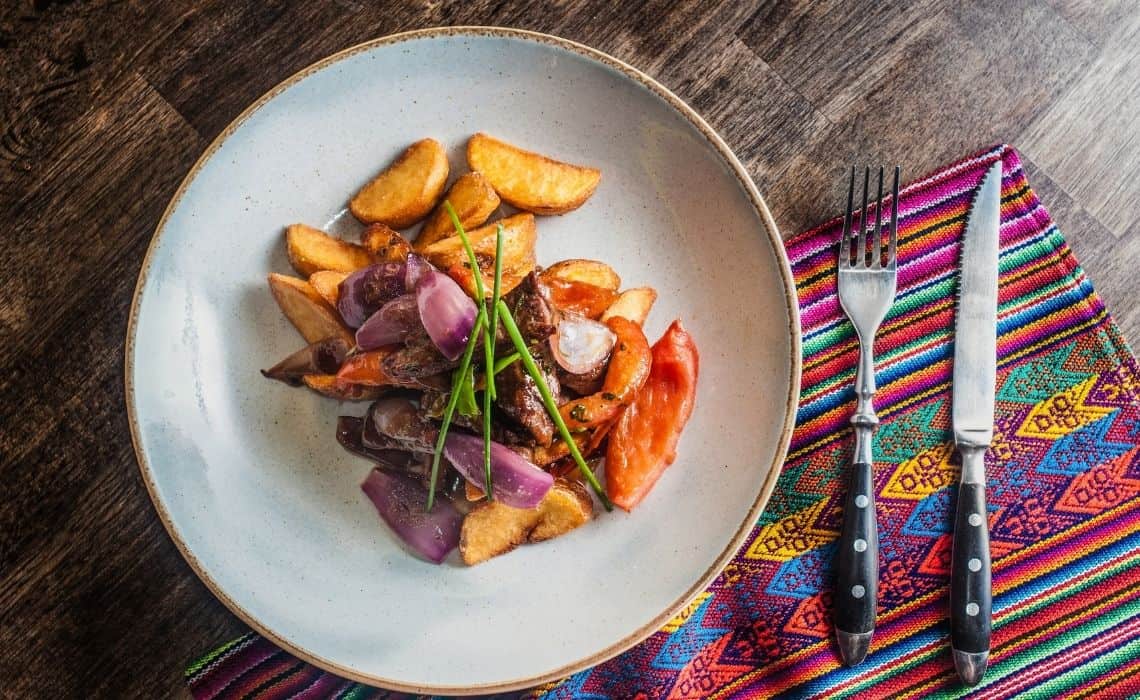 Lomo saltado is another staple dish found in restaurants across Peru. A Peruvian and Chinese stir fry, it’s a delicious mix of marinated meat with a range of fried vegetables. Every family seemingly has their secret recipe for this dish, born from the immigration of Chinese people to Peru in the 1920s.

For something that you won’t be able to find in many other places, track down an alpaca burger. Alpacas are bred in the Andean region of Peru, meaning that their meat is a staple feature in restaurants. This classic taste of home with a Peruvian twist is sure to impress.

As you wander around the cities of Peru, you’ll likely run into a lot of food carts selling anticuchos. This classic street food is made from sliced beef heart, skewered, and then grilled. The meat is usually marinated with chili peppers, black pepper, garlic, and cumin.

Peru’s cuisine features a variety of influences from around the world. One that plays a big role in Peruvian food is Japanese. Nikkei is a kind of catch-all word for Peruvian-Japanese fusion. Peruvian ingredients (things like tropical fish, quinoa, and chili peppers) are cooked with Japanese techniques, such as a dash of lemon on fish to create a ceviche or sushi.

For those who don’t fancy catching the bus from Agua Calientes, it’s also possible to hike up to the ruins yourself. A steep trail cuts up the right-hand side of the switchbacks that the shuttle buses follow. The trail intersects three times with the road, so watch out for traffic.

How long is the hike from Agua Calientes to Machu Picchu?

The hike will take around 1 hour and 30 minutes for those of a reasonable fitness level.

Getting Acclimated for Your Visit

More than likely, you’ll be arriving in Peru from somewhere much lower than Machu Picchu, which sits 7,972 feet above sea level (2,430 meters). Nearby Cusco, where you’ll find the closest airport to Machu Pichu, is even higher: it’s over 11,000 feet (3,399 meters).

A great way to get used to these heady heights is to spend a few days in Agua Calientes a few days before making your way up to Machu Picchu. This also gives you time to spend exploring the Sacred Valley, seeing parts of the area that not many others bother to see.

Essential Items for your Trip to Machu Picchu

After you’ve finished our Machu Picchu guided tour, chances are you’ll want to hang around and continue exploring. It can be a long day up in the mountains, and there are a few things you should remember to bring to stay safe and comfortable. Sun protection is essential; at such altitudes, sunburns are quite easy to come by. Bringing your passport along also lets you get a special stamp as a unique souvenir of your visit.

The 5 Essential Items You Should Pack for Machu Picchu

As one of the most incredible sites in the world, Machu Picchu is impressive, humbling, and one of the few links we have left to the old world. With our Machu Picchu Hiking Tour below, you’ll be able to discover all the important sights and delve into the fascinating history of this ancient citadel.

Learn the true history of Machu Picchu, the glorious Incan citadel, and one of the New Seven Wonders of the modern world. On this exclusive short tour, we’ll dispel its myths just as we’ll embrace its mysteries.