A Rio de Janeiro walking tour is the best way to quickly get to the heart of this feisty Brazilian city and embrace the good life.

Visits to the capital of Brazil, Rio de Janeiro, come with a sensory overload. It’s easy to fall in love with this city, a feast for the eyes, tastebuds, and soul. From its vibrant nightlife to sumptuous local cuisine, you’ll quickly realize why this destination is known as Cidade Maravilhosa or the Marvelous City.

Set amongst a dreamy and lush tropical setting, we couldn’t picture a better environment for a city. From picturesque mountains to dreamy golden beaches, Rio is surrounded by an abundance of natural beauty. The architecture, too, is amazing, offering a superb mix of different styles from throughout history.

As night falls over Rio, don’t even think about retreating to your hotel; this is a city that knows how to party. From samba-fueled beach parties to Carnaval’s huge celebration, the locals have no trouble finding an excuse to drink and dance. This infectious energy runs throughout the city, and it’s hard not to get swept up in the joyous feelings. When you’re running low on energy, refueling on delicious local delicacies showcases the vibrant ingredients on offer in the region.

Whether you’re a history buff or foodie, adventure traveler or beachgoer, a Rio de Janeiro walking tour will set you up to enjoy the best of this enchanting city. Get ready for fun in the sun and sand, and welcome to Rio de Janeiro.

Rio was first marked for settlement by the Portuguese, sailing around the world in search of the New World. Arriving in 1502, they promptly enslaved the local indigenous, setting them to work for the Portuguese empire. Thousands perished from introduced disease, harsh conditions, and fighting. Soon, Portugal also began to bring in slaves from Africa to work as well. The foundations of Rio were first laid in 1565, built off the back of these colonial slaves.

Rio as a Pioneering Town

The colonizers quickly set about exploiting the natural resources of the area. From sugar plantations to gold mines, wealth began running through Rio’s streets during the 17th century. Growing the town in the name of the empire, slaves continued to be trafficked into the city, while immigrants from Europe also arrived to seize their opportunities. The influx of gold in the town also drew thieves, murderers, and pirates, seeking their own fortunes.

Jumping ahead to the early 19th century, the Portuguese royal family took up residence in the city, fleeing from the Napoleonic invasion. Arriving in Brazil, they took up residence in Rio, which had a monumental effect. Encouraging growth, the king imagined a European-style city, which drew countless Europeans to migrate to Rio. It was during this time of great wealth where most of Brazil’s long-lasting monuments were built.

Independence and the Capital

Thirteen years later, in 1820, the royal family sailed back to Portugal, which paved the way for Brazil’s independence. 1822, Brazil achieved independence, with the king’s son Dom Pedro declaring himself the country’s emperor and Rio his capital. Rio remained the capital of the country until it was moved to Brasilia in 1960.

Many stories, political intrigues, and cultural shifts have played out in this South American metropolis. To delve more into the history, check out our tour of Rio de Janeiro below. Even if you can’t travel there, the tour is also available as a virtual tour of Rio de Janeiro, letting you experience the history and grandeur of the city from the comfort of your sofa.

Where to Stay in Rio

The 5 Best Neighborhoods to Stay in Rio

Santa Teresa is an old hilltop district with steep streets home to colonial mansions, boutique stores, and feisty nightlife. From the heights of the cobbled streets in this area, you’ll get a great view over the entire city. At the top is Christ the Redeemer statue, one of the most famous attractions in Rio de Janeiro.

For those after the samba-fueled nightlife, Lapa is an excellent choice. This is where bars and clubs come alive at night, while by day, the area thrives with street art, fun restaurants, and good bars. You’ll also find plenty of museums in the area for a dose of culture in between nights out. 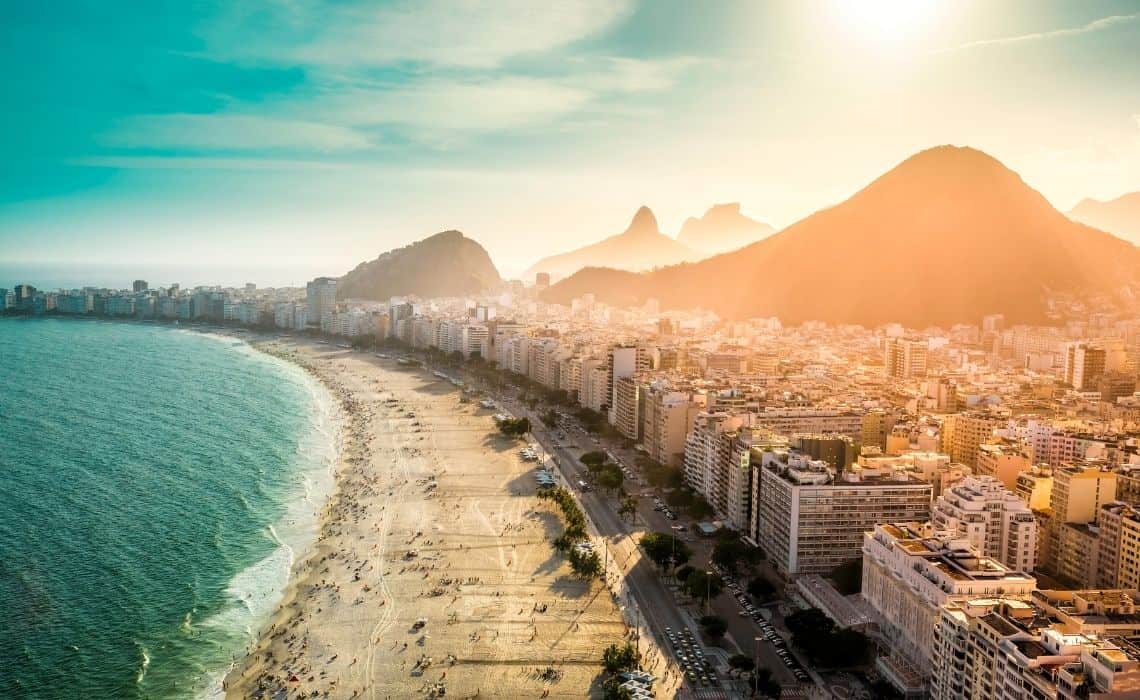 If you’re going to spend a lot of time at the beach, you will do well to stay in Copacabana. This neighborhood lets you feel the festive soul of Brazil: it’s crowded, filled with life, and loads of fun. The promenade along Copacabana Beach is one of the loveliest in the cities, while the beautiful beach itself will no doubt tempt you in for a day in the water.

For something more laid-back and family-friendly, you’ll want to stay in Botafogo. Home to one of the safest beaches in the city (Red Beach) and the scenic Sugarloaf Mountain, there’s plenty to keep you occupied. There are also great transport links into the city, making it a great spot to base yourself for thorough explorations of Rio.

Finally, another famous beachfront neighborhood is Ipanema. Further south than Copacabana, this is an upscale area with plenty of luxury hotels – expect prices to be higher here than elsewhere in the city. Classy restaurants line the beautiful beach, which is one of the prettiest in the city. It doesn’t get much better than this.

What to Eat in Rio? 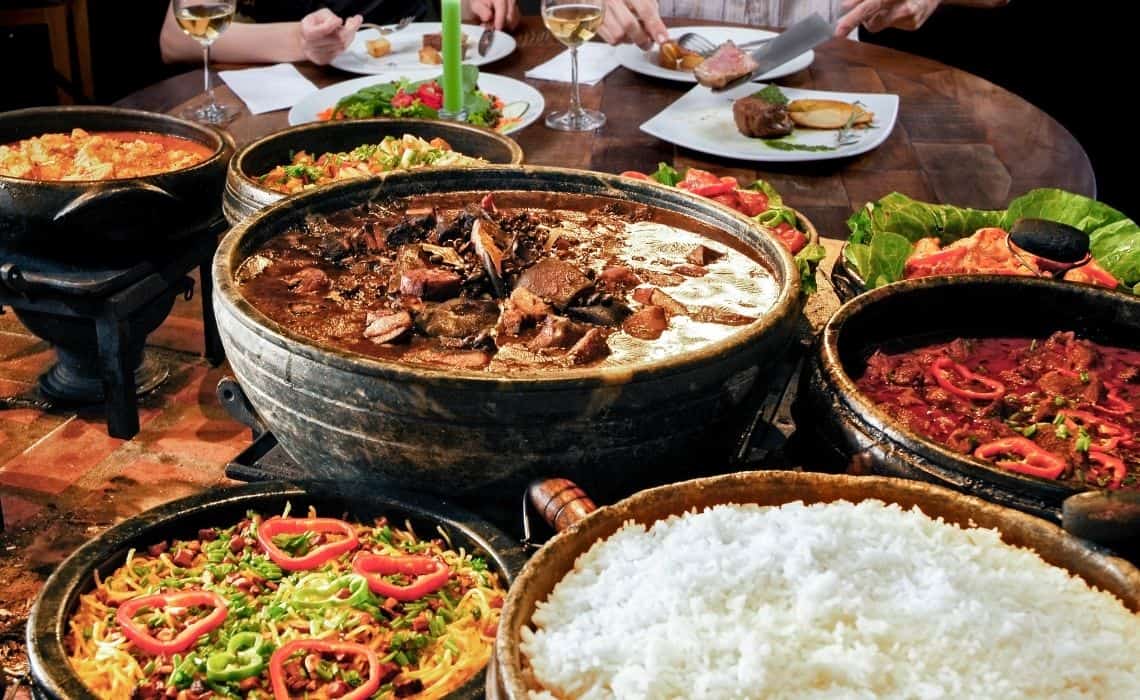 Brazil’s national dish is feijoada, so trying some while you’re in Rio is a must-do. This is a hearty stew featuring black beans and meat, served with sides of white rice and farofa (made from toasted cassava flour). Perfect after a day of walking in Rio de Janeiro.

Another iconic food from Rio has made its way around the world: açai. This berry enjoys superfood status, is packed with health benefits, and very easy to find as you explore Rio. Usually, you’ll find it served as a sorbet over granola and accompanied with bananas and strawberries. Loaded with energy, it’s a great breakfast to prepare you for a day in Rio de Janeiro.

Pao de queijo is a yummy snack that’s the perfect accompaniment to a walking tour. This food is a bread roll made from tapioca flour, filled with delicious melted cheese. You’ll find it for sale around every corner, and there’s never a bad time to eat them.

Much like their Argentinian neighbors to the south, Rio locals love a good BBQ. That’s why there’s a whole lot of grilled meat around the city. One of the most popular ways to enjoy it is by going to a restaurant where they charge you per kilo of meat. To find these restaurants, keep an eye out for the word rodizio, Portuguese for “all-you-can-eat service.”

Finally, when you’re lying on the beach after a walking tour, be sure to hail down any vendors walking by with fried sardines. Served with a pinch of salt and dash of lime, it’s hard to beat wolfing down these tasty little fish while basking in the sun by the sea.

It is hardly news to most people, but in case you didn’t know, Rio throws one of the world’s greatest parties every year: Carnaval. For five straight days, music, dancing, parades, and general revelry fills the city’s streets. Many believe the festival is a pagan ritual welcoming the beginning of the spring – the festival takes place for the five days leading up to Ash Wednesday every year. The culmination is a gigantic parade, with mechanized floats and twirling dancers in an explosion of color, music, and festivity.

There’s a lot more to Rio than just lazing away on the beach – this is an excellent destination to partake in some urban adventure tourism. Tijuca Forest is a lush rainforest filled with dramatic mountain peaks, perfect for hiking. The harbor is also one of the most spectacular in the world, ideal for sea kayaking adventures. And rather than take in the view of the city with thousands of other tourists, why not opt to hang glide over it instead? It’s from the air where you can truly appreciate the topography of Brazil’s steamy capital.

Rio is home to a passionate live music scene, and experiencing a live show while you’re in town is highly recommended. The city enjoys a wide range of genres and styles, from its samba-fueled bands to reggae, jazz, and hip-hop. Inside the following venues, ranging from cocktail bars to old colonial mansions, you’ll find regular performances by local and international artists.

There’s a lot to discover in this alluring Brazilian city. To learn more about its history, culture, and way of life, check out our Rio de Janeiro walking tour below. 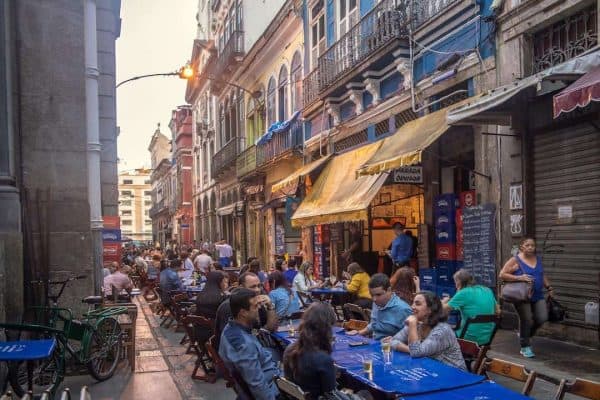 In the old streets of downtown Rio de Janeiro, we will explore the history of Brazil from the colonial period to the present day, through the Empire, the years of the Old Republic and the troubled periods under military dictatorships.…