Embarking on a Boston self guided tour is one of the best ways to discover this fascinating destination’s history and culture.

Boston is a destination that perfectly mixes its past and present. From the revolutionary spark that would start America’s war for independence to the city’s transformation into one of America’s most forward-thinking metropolises, there’s a lot to discover – and love – about Boston.

But first and foremost, this city is heaven for history buffs. Steeped with significance not many other US cities can lay claim to, those in search of stories about colonial times and the American Revolution have come to the right place. From its start as the connection between the Old and New Worlds to the American Revolution, a lot has happened in these city streets. Visit, and you’ll soon be wrapped up in thoughts of American history, its struggles, and victories.

While history is one of this city’s biggest draws, that doesn’t mean it lacks contemporary sights. From trendy cafés to world-class museums to luscious green space, this destination is packed with things to see and do. Boston has long enjoyed a wealth of culture, and today you’ll find a bounty of art, music, theater, and other fun things to do throughout the city.

After so much discovery, you’ll probably have worked up an appetite. When it comes to cuisine in Boston, it’s all about fresh seafood. From fresh lobsters plucked out of the Atlantic to clams, mussels, and fish n’ chips, there’s a feast of ocean flavor to discover.

To discover this diverse and beautiful destination, a Boston self guided tour is the way to go.

Boston’s history can be traced back to 1630 when Puritans from England settled in the area. These religious outcasts first set up in Charlestown before quickly moving across the river (closer to the freshwater source) to their new home, Boston. The new society was dominated by religion, with the Divine Law bringing order to the community.

As one of the first points of contact between the Old and New World, Boston quickly turned into a boomtown. Fortunes were made in the maritime industry, from fishing to shipbuilding, and Boston became the richest city out of all in the American colonies. The Puritan leadership was pressured by new riches flowing into the city, as individualism and profit became more enticing to those settling in the area. It would change the course of the city for good.

Birthplace of the Revolution

As the Crown of England continued to increase taxes and tariffs on the Boston colony, resentment increased. Protests and vocal mobs took to the streets, met in kind with more oversight from the British. Things continued to escalate, with rebellious Bostonians banding together as the Sons of Liberty.

The Shot Heard Round the World

As the grip of the British tightened on the city, the rebellion was only inflamed, building up to “the shot heard round the world” in April of 1775. At that time, things came to a head, with the redcoats and rebel militia firing upon one another and signaling the start of the American Revolution.

For a deeper look into the city’s colonial and revolutionary history, your best bet is to check out our self guided freedom trail tour. Much of the revolutionary history that took place is explored on the Freedom Trail in Boston, which links 16 historical sites throughout the city.

All our tours can also be done from the comfort of home, meaning it’s also available as a Freedom Trail Boston virtual tour.

Where to Stay in Boston

The 5 Best Neighborhoods to Stay in Boston

The most obvious choice for travelers is to stay in Downtown Boston. The historical and commercial heart of the city, this area is beautiful. Cobbled lanes and ancient buildings are set against the more modern skyline of skyscrapers in the background. It’s also a short walk to the park Boston Common, where the Freedom Trail tour begins. Prices are a bit higher than elsewhere.

Located in the center of Boston, Back Bay is another great neighborhood to stay in when visiting Boston. A luxurious and upscale area, prices here can also be more on the pricey side. Some of the city’s most interesting sights, like the Boston Public Library and Public Garden, are in this neighborhood. It’s also well connected to the best parts of the city.

The North End is the compact area wedged between the water and downtown Boston. Another great spot for history lovers, this neighborhood puts you within easy distance of all the sights of the Freedom Trail. This is also the epicenter of Italian migration to Boston, meaning there’s a fantastic array of restaurants and shops selling delicious Italian fare. Just don’t call it Little Italy.

South of the Back Bay neighborhood, you’ll find South End. This is an especially nice area to stay if you’re a foodie traveler, as it’s filled with cafés and restaurants with some of the best food in the city. There are also many showrooms and galleries to explore, and the neighborhood is home to the Boston Center for the Arts. Prices are moderate.

For a bit more of an affordable, residential area, you’d do well to stay in Brookline. A metro line links this quiet neighborhood with the city, making it a great choice if you want to stay somewhere a bit quieter but still close to the action. As a mainly residential area, prices are good, and there’s a lot of small restaurants and cafés scattered throughout the streets to explore.

What to Eat in Boston?

Boston baked beans are a classic dish you should try – this city doesn’t have the nickname Beantown for nothing. Despite the name indicating otherwise, this dish isn’t baked at all. Instead, beans are stewed and sweetened with a syrup, before adding bacon or salted pork. It’s a comforting dish served in pubs, perfect for recharging after a Boston Freedom Trail walking tour. 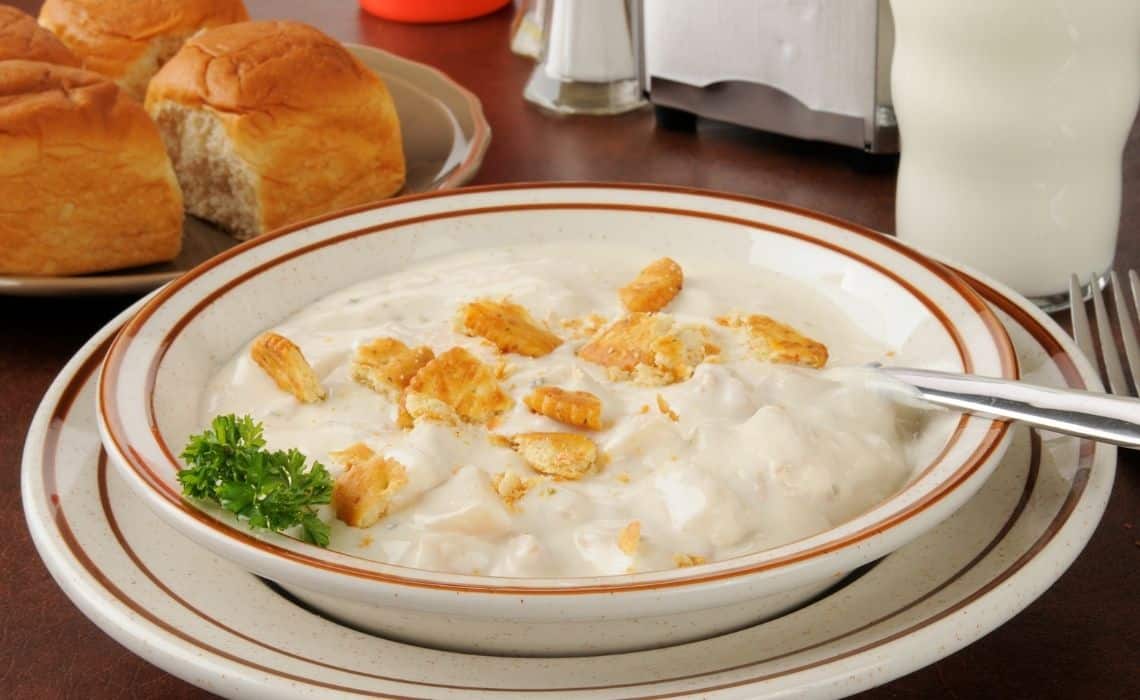 Clam chowder (“chowdah” if you want to sound like a local) is another dish that has been around since the settlement days. This creamy soup is made from clams, onions, milk, and potatoes, all of it thickened with oyster crackers. Warm, delicious, and filling.

Summer in Boston means one thing: lobster rolls. Simple and delicious, it’s a buttered roll overflowing with fresh lobster meat and either melted butter or mayonnaise. Perfect for a hot day in the sun exploring the city.

For a delicious feast of fresh seafood, you should track down a traditional clambake. This is when you get lobster, mussels, clams, fresh corn, and red potatoes, wrap them all together and steam everything over a fire. It’s a traditional meal all over New England and a real taste of the region.

For dessert, you’ll want to try one of Boston’s famous cannolis. This flaky and delicious pastry is hollowed out and loaded with sweet ricotta cheese. It’s made even better with the addition of chocolate, nuts, or fruit inside—a true taste of Boston.

Boston is also a city of sports; catching a game while you’re visiting is an experience you’ll likely never forget. From the NBA’s Boston Celtics to the NFL’s New England Patriots, this destination has a long history of successful teams. Fenway Park is one of the country’s most iconic baseball stadiums, home to the Boston Red Sox, while the Boston Marathon attracts thousands of runners from around the world each year.

America’s oldest university, Harvard, is located in Cambridge, right next to Boston. Founded in 1636, it remains one of the most prestigious schools in the entire world; visitors are drawn here for the name alone. Among its alumni are Mark Zuckerberg, Bill Gates, Barack Obama, and Neil deGrasse Tyson, to name a few. Free tours of the school’s most historic sites around campus depart from the Smith Campus Center.

It’s not just the city that you should explore while in Boston; this destination also has a total of 34 islands just off the coast, well worth a visit. During the warmer months, catching a ferry out to one of the islands to check out the local wildlife, nature, and historic landmarks from the early days is strongly recommended.

5 Islands to Visit from Boston

Whether you’re a history buff or a sports fan, Boston is a destination that you’ll love. To discover this diverse destination on your own or from the comfort of home, check out our Boston self guided tour below. 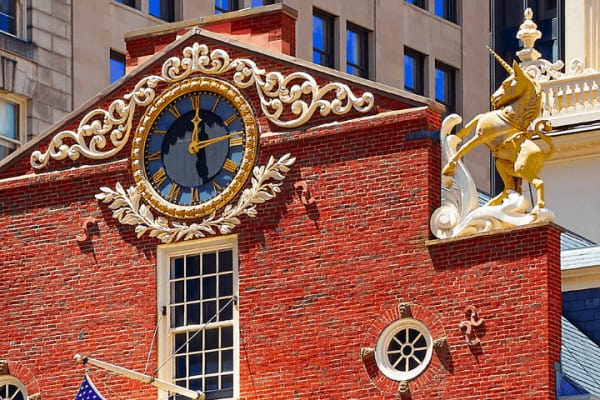 Colonial and Revolutionary era Boston come to life in this unique tour of Boston’s Freedom Trail. Beginning at the corner of Boston Common and ending at Old North Church, our tour winds through the streets of modern-day downtown Boston, traversing…