A Charleston self guided walking tour is one of the best ways to take a deep dive into the fascinating and important history of this city.

First and foremost, Charleston is a city for history buffs. Cobblestone streets lead between some of the country’s biggest historical landmarks, giving visitors a glimpse into colonial America. There’s a lot to explore, from the country’s oldest public gardens to boundless history, art, and architecture. You’ll even see the odd horse-drawn carriage canter by as you wander, cementing even further the historic atmosphere of this storied town.

This important city has long been at the heart of America’s history. Some of the Founding Fathers discussed revolution in Charleston’s historic homes. British and American forces fiercely collided in the American Revolution here, and the first shots of the Civil War rang out in Charleston.

With all that history, you’re sure to work up an appetite; luckily, Charleston is also one of the foodie capitals of the U.S.A, drawing comparisons with European epicurean heavyweights such as San Sebastian, Paris, and Florence. From inventive new oyster bars to classic Southern barbecue joints, the local flavors of America’s south are alive and well in this destination.

But above all else, Charleston is simply beautiful. Gorgeous historic homes line the streets, with fragrant jasmine plants flowing over elegant brick walls. Around every corner awaits another enchanting church, graceful house, or tree-lined street. When you add in the locals, with their welcoming southern drawl and gracious hospitality, you’re left with one of the most compelling destinations in the U.S.

For the best introduction to the city, a Charleston self guided walking tour will give you a fantastic overview, setting you up for further explorations of this charming destination in South Carolina.

In 1670, the city was first settled by English colonists, originally being named Charles Town after King Charles II. The colonists recognized the strategic location of the area, nestled between the Cooper and Ashley rivers. Conflict with nearby French settlers, Spanish, and the Native Americans who lived in the area defined the early years of Charles Town, causing the settlers to build the historic wall around their town.

Thanks to its location, Charles Town became a center of trade, with ships plying the waters between the settlement and Europe. Trade goods pouring in from the continent enhanced the sophisticated feel of the city, which was beginning to feel like a “Little London.” Its progressive and inclusive philosophy towards all kinds of religion garnered it another nickname: “The Holy City.” During the 18th century, the city was one of the most important colonies in the British Empire.

When the Revolutionary War broke out, Charles Town was hotly contested by both sides thanks to its strategic location at the mouth of two riverbeds. Held by the American forces, the British attacked by sea in 1776, although they failed to win the fort on Sullivan’s Island and had to back a hasty retreat. They returned soon after, taking control of the city in 1780 after a decisive victory. Despite guerilla resistance from Americans in the area, they wouldn’t leave again three years later when the war was won. Afterwards, the city was officially renamed Charleston.

In 1860, the town was divided. At the end of the year, the Ordinance of Succession was signed, and South Carolina became a separate entity from the United States. On April 12, 1861, it was in Charleston where the first shots of the American Civil War rang out, with Confederate troops opening fire on Fort Sumter in the bay. They successfully drove out the Union troops, but the city was hotly contested for most of the war, with battles raging in the surrounding fields as Confederate forces beat back the advances of the Union. 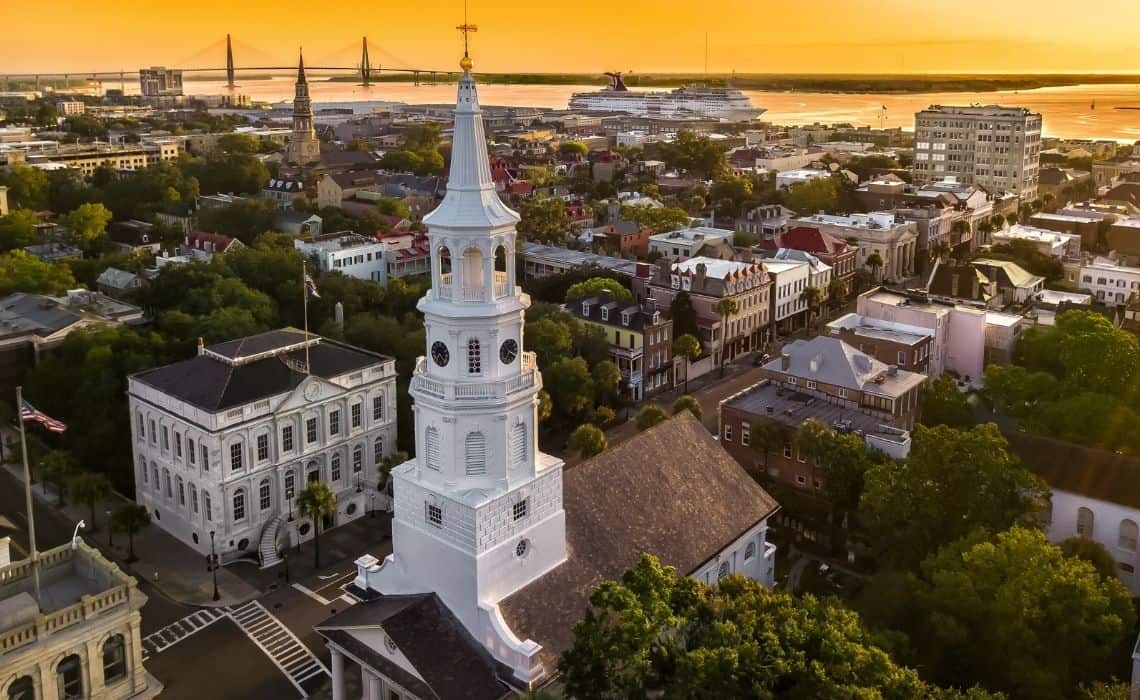 Where to Stay in Charleston

The Best Neighborhoods to Stay in Charleston

For first-timers in the city, Downtown Charleston is a fantastic choice to stay. Loaded with history and charm, it’s here where you’ll find most of the city’s main attractions and the bustling King Street. There’s a wide variety of restaurants, shops, and hotels of all prices. However, the area is also known for its nightlife; if you’re looking to get some shuteye on Friday and Saturday night, this might not be your best bet.

The French Quarter in Charleston is a small section of Downtown that existed within the original “walled” city. Charming and quaint, this area is one of the most popular spots to stay in the city. Even if you don’t choose to sleep in the hotels here, it’s a large part of our historic Charleston walking tour.

Another fantastic choice for accommodation in Charleston is the area known as South of Broad. This area is filled with paved alleys, historic Victorian-era homes, secretive courtyards, and plenty of Southern charm. This quiet residential area is perfect for those looking for something more low-key.

Another leafy and quiet spot close to it all are the neighborhoods West Side and Hampton Park. Occupied by young families, it’s a friendly spot to get to know local life better. Prices are great for budget travelers as well, and there are a fair number of restaurants that have popped up in recent years to serve the growing community.

Finally, foodie travelers and those after a good bit of nightlife will want to stay in NoMo (North of Morrison). A former industrial area, young creatives have recently taken over, opening restaurants, cafés, bars, and breweries, in the run-down buildings, giving the entire neighborhood a rustic, hipster vibe.

What to Eat in Charleston?

Foodies will love the restaurant scene in Charleston. There’s something for all palettes with a perfect mix of classic Southern comfort food with more modern dishes. If you’re travelling to Charleston in the winter, don’t miss the Charleston Restaurant Week, usually taking place in January each year.

Shrimp and grits is the most likely dish to be dubbed the official food of Charleston and is a must-try while visiting the destination. Combining Native American cuisine with some southern flair and flavors, this is a simple dish. Grit is made from ground corn and is very popular in America’s South.

In South Carolina, barbecue is another essential meal you should enjoy at least once during your travels. Although most places in America’s South love a good cookout, in South Carolina, it’s especially important. Most locals will tell you that the sauces they slather their meat in are the best. Pulled pork is usually the meat of choice, topped with a barbecue sauce made from either a mustard or vinegar base. Either way, it’s delicious, and there are plenty of barbecue joints to sample around downtown Charleston.

Thanks to its location by the Atlantic, the seafood in Charleston is fantastic. Sampling some fresh oysters while in town is a treat not to be missed (unless, of course, you don’t like oysters – they’re not for everyone). Charleston is also the location of the Annual Lowcountry Oyster Festival, the largest of its kind in the world, which usually takes place in January.

Another speciality of Charleston is its she-crab soup. It’s the answer to New England’s clam chowder, and while recipes vary across town, generally, it’s made up of crab meat, crab roe, a dash of sherry, and heavy cream. The result is a creamy bisque-like soup that’s perfectly comforting and filling after a self guided walking tour of Charleston.

Finally, there’s no escaping fried chicken when you’re in America’s South. It is by far one of the most popular dishes across the region, with many secret recipes passed down through the generations.

The beauty of Charleston has long drawn in the country’s greatest artists and art-lovers alike. Museums of art and independent galleries could keep you occupied for days while local workshops sell their handcrafted wares. On top of that, stunning pre-war homes line the streets – a Charleston architecture tour is immensely rewarding.

Like many other cities in the American South, Charleston is home to a great number of ghost stories. From soldiers to murdered pirates to serial killers, there are a lot of spirits that haunt the streets of this city. One of the spookiest locations is the Old Exchange and Provost Dungeons, where the British converted the bottom floor into a dungeon to hold their American prisoners of war. 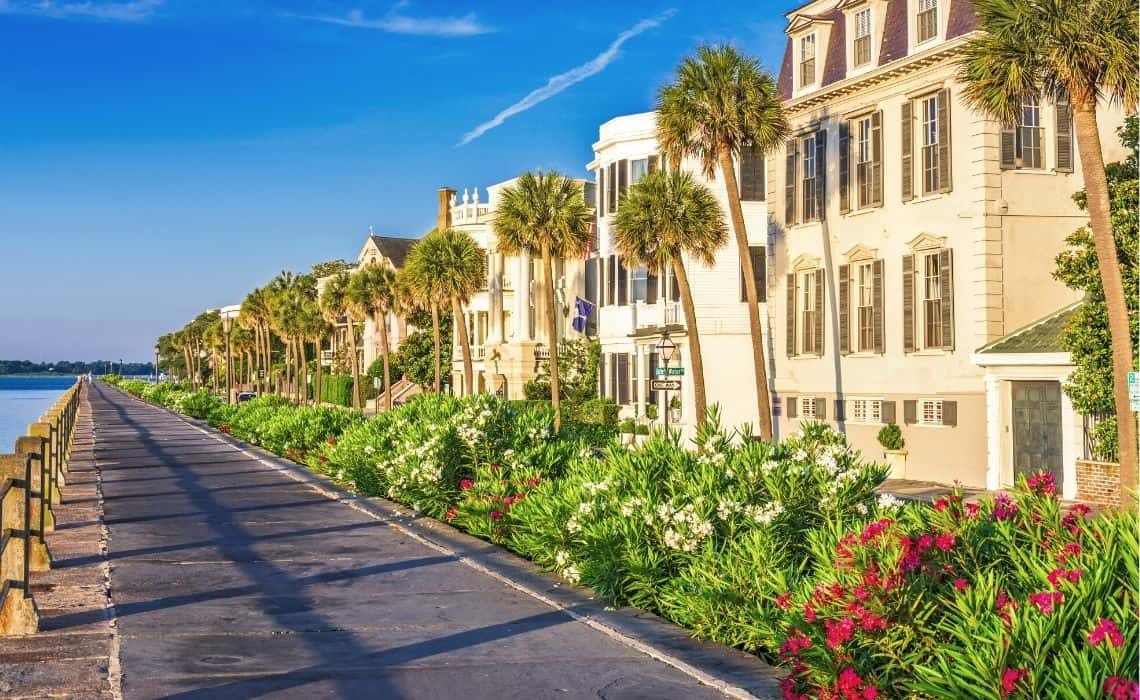 Located at the mouth of the two rivers, a short drive in either direction up the coast reveals some of the prettiest beaches in South Carolina. From funky beach towns to quiet islands of nature, head to the following destinations for a healthy dose of nature.

The 5 Best Beach Destinations Near Charleston

A city filled with history, fascinating culture, and welcoming locals, a visit to Charleston will surely be one of the highlights of travels in the U.S.A. To get right to the heart of this destination, a Charleston self guided walking tour is the best way, discovering the story of one of American’s most compelling destinations. 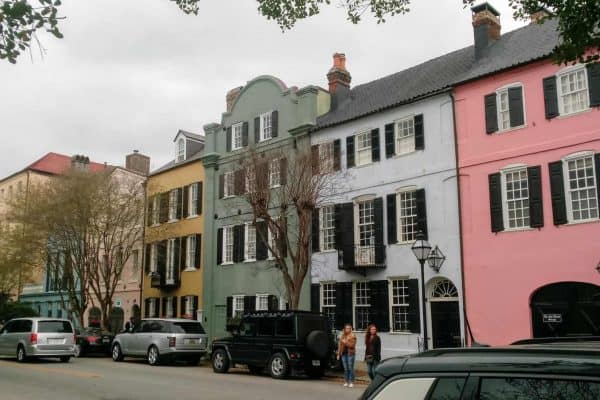 Our tour of Charleston will focus on highlighting the city’s colonial and Revolutionary War history. The tour starts at the Circular Congregational Church graveyard and ends at Washington Park. By the time of the Revolutionary War, Charleston, South Carolina already…