Our historic walking tour Savannah, the hostess city of the south, explores the interesting and unique story of this beautiful city.

Savannah might just be one of the most underrated cities in the U.S.A. This buzzing little destination in Georgia charms you from the moment you arrive, with its elegant pre-war mansions, a lovely historic center, and plenty of large avenues lined with towering oak trees laden with Spanish moss.

The Historic District is the most popular part of the city. It’s the largest National Historic Landmark District in the United States. Gorgeous squares give way to cobbled streets, lined with 18th and 19th-century homes. Everywhere you go, those incredible oak trees soar above, creating a beautiful and serene atmosphere.

At its heart, Savannah is an artsy, alternative community, complete with a vibrant nightlife. Various museums clamor for attention, while students come from far and wide to study at the preeminent Savannah College of Art & Design, one of the most prestigious in the country. You’ll be welcomed as a friend wherever you go as well – there’s a reason Savannah is known as the Hostess City of the South.

Speaking of the south, you probably already know that the food here is going to be fantastic. Some of the world’s greatest comfort foods make an appearance; crumbed, fried, and loaded with cheese. But that’s not all that’s on offer. Savannah is also looking forward. From trendy brunch spots to high-end restaurants, the city’s chefs are transforming the local ingredients and recipes, reinventing them for the new age.

A trip to this city will surprise, delight, and have you planning a return visit. The best way to get your bearings on the ground is with our historic walking tour Savannah, delving into this city’s fascinating story.

Like the rest of the United States, Savannah is built on land that first belonged to the Native Americans. A tribe known as the Yamacraws were first to settle in the area around Savannah. They would go on to become fast friends with the first white settlers who arrived during the 18th century.

The Settlement of Savannah

On February 12th, 1733, General James Oglethorpe, his crew, and colonists arrived at Yamacraw Bluff, right in the middle of what is now River Street along the water. They were greeted by Tomochici and his Yamacraws, who gave the settlers permission to form a settlement by the river. With this early cooperation between the settlers and Native Americans, Savannah avoided the warfare and bloodshed that marked so many other colonies in America.

James Oglethorpe had arrived with a plan for his new settlement. The first grid system used in America created a series of integrated and walkable neighborhoods. As Savannah grew, it quickly became an important trading post thanks to its location by the river. However, when the American Revolution broke out, that same strategic location meant that it was hotly contested territory. At first, the British held the city, but it fell to a combination of American and French troops during the war. After independence was won against the British, the city boomed thanks to the cotton trade in America’s south. During this time, many of the historic houses in Savannah were constructed by the residents, most of which still stand today.

Those good times and economic fortunes ground to a halt when the American Civil War broke out across the country. A strict sea blockade stopped any trade from leaving the city, causing the economy to crash. Savannah wasn’t captured until General William Sherman of the Union Army arrived in 1864, at the end of his famous March to the Sea campaign. This campaign began upon leaving the captured city of Atlanta, burning the cities they captured along the way to disrupt the enemy’s economy and supply lines. It’s said that the Savannah was spared because of its beauty – something we can all appreciate today.

Since then, Savannah has once again rebuilt itself into a successful city. There are, of course, many more stories to discover, best explored on our self guided walking tour of Savannah. Visiting the most beautiful squares and monuments of the Historic District, it delves into the history in greater depth, from settlement to modern-day. It can also be done as a Savannah virtual walking tour, letting you explore from the comfort of home.

Where to Stay in Savannah 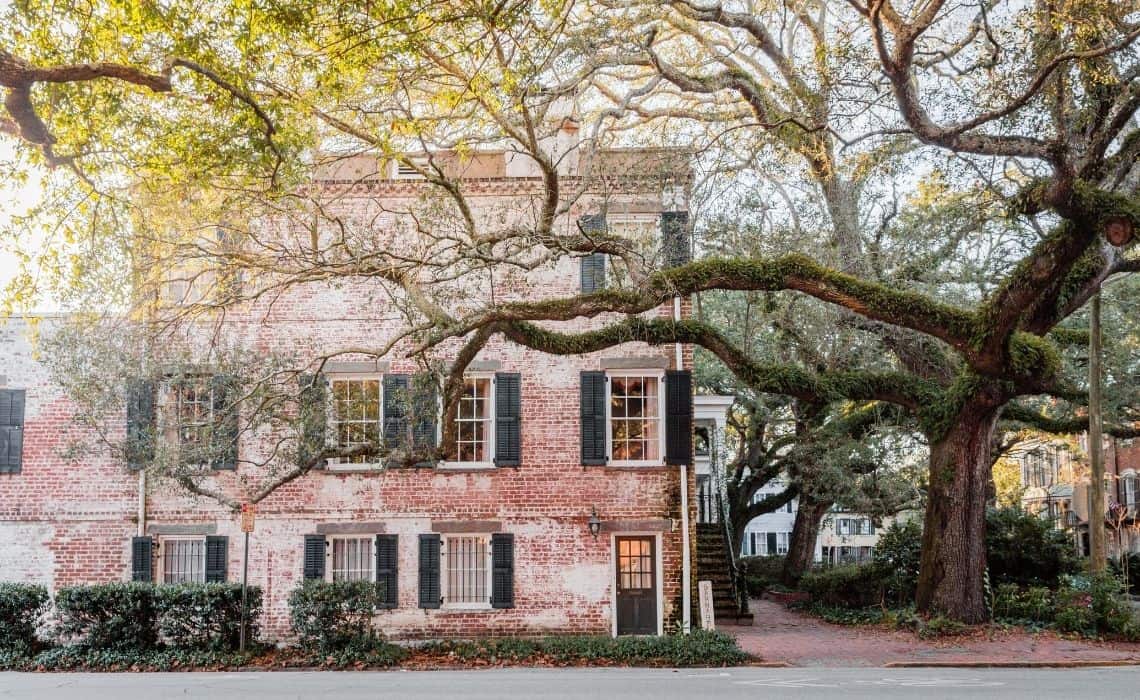 The 5 Best Areas to Stay in Savannah

For those who want to stay in the middle of it all, Savannah’s Historic District is a fantastic choice. Cobblestoned streets, green squares, and fascinating architecture all combine here to create an alluring atmosphere. It’s the most popular area for tourists to stay, and where you’ll probably spend most of your time while visiting. As we’ve already mentioned, it’s also the area where our self guided tour of Savannah takes place.

City Market is a small part of the Historic District, located on the northwest corner of downtown Savannah. This is where you’ll find the main shopping area and public market and is also very well known for its nightlife and events. Add in loads of restaurants, and you’ve got a great location to stay while in the city.

Another small part of the Historic District is River Street. As the name suggests, this is the area of downtown immediately alongside the Savannah River, loaded with shops, restaurants, cafés, and bars. Strolling along the 200-year-old cobblestone streets alongside the waterway is a perfect way to spend an afternoon in Savannah.

South of the central Historic District is the Victorian District, a calm and residential area filled with charming Victorian architecture. If you’re looking for a tranquil place to enjoy wandering, this is the spot. The lovely Forsyth Park at the edge of the neighborhood is a beautiful green space to enjoy even more leisure time.

Finally, further south of the Victorian District is Starland. Most cities have a recently gentrified neighborhood, and in Savannah, this is it. Staying here lets you discover an abundance of art, culture, fashion, and live music. Prices vary, but there’s always a good bargain or two.

What to Eat in Savannah?

Southern comfort food is the main attraction for foodies in Savannah. Although, the city has recently started experimenting with old dishes done in new and exciting ways. We’ll cover the classics and then let you discover the modern cuisine for yourself. 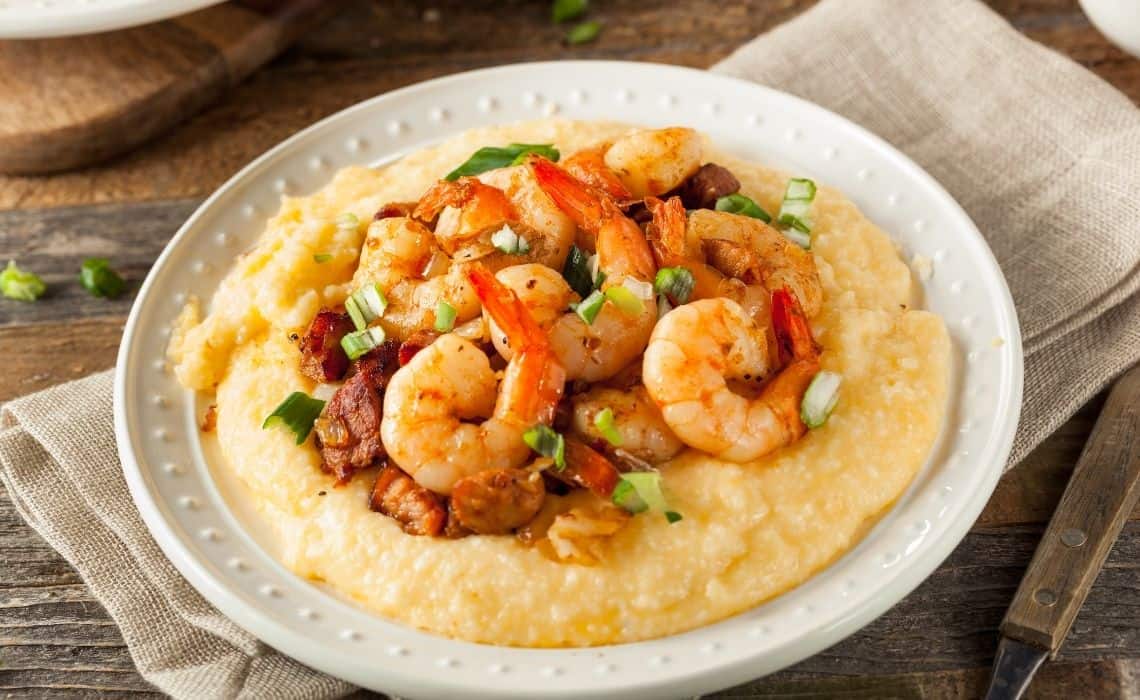 Shrimp and grits is a classic dish served in Savannah. There’s a bounty of fresh seafood flowing through the city thanks to its position next to the ocean, so be sure to try this dish. Grits is a porridge-like food made by grinding up dried corn kernels, served with fresh shrimp on top. Simple and delicious.

Another dish served in restaurants across Savannah is Fried green tomatoes. Exactly as the name describes, these are large green tomatoes sliced up, breaded in cornmeal, and deep-fried. The result is a delicious and easy appetizer, often appearing on plates as a side dish or as part of a larger meal.

The comfort food keeps coming with biscuits and gravy, another classic of southern food. Nothing warms you up quite like this dish; the biscuits are soft and flaky, melting in your mouth alongside the warm gravy studded with bits of sausage. It’s so popular, this dish now appears across the entire U.S.A., but nothing beats sampling it in its home region.

It’s an obvious one to try in Georgia, but fried chicken is another dish you just can’t pass up an opportunity to try (unless, of course, you’re a vegetarian). There’s something about fried chicken in the deep south that just makes it taste much better than anywhere else in the country. Find it all over the city – there’s no shortage of restaurants serving this dish.

Finally, Hoppin’ John is another staple in Savannah. This dish is made from a base of black-eyed peas and rice, mixed in with smoked pork (or bacon) and fried onion. It’s a delicious treat to enjoy after a walking tour of Savannah.

One of the biggest draws for tourists to Savannah is that it’s known as the most haunted city in America. Plenty of historic buildings across the city are tied in with ghost stories and legends, adding a spooky edge to any visit to the charming southern city. From tales of grisly murders to an old military hospital that saw hundreds of deaths, there’s plenty of ghost tourism to explore.

The 5 Most Haunted Places in Savannah 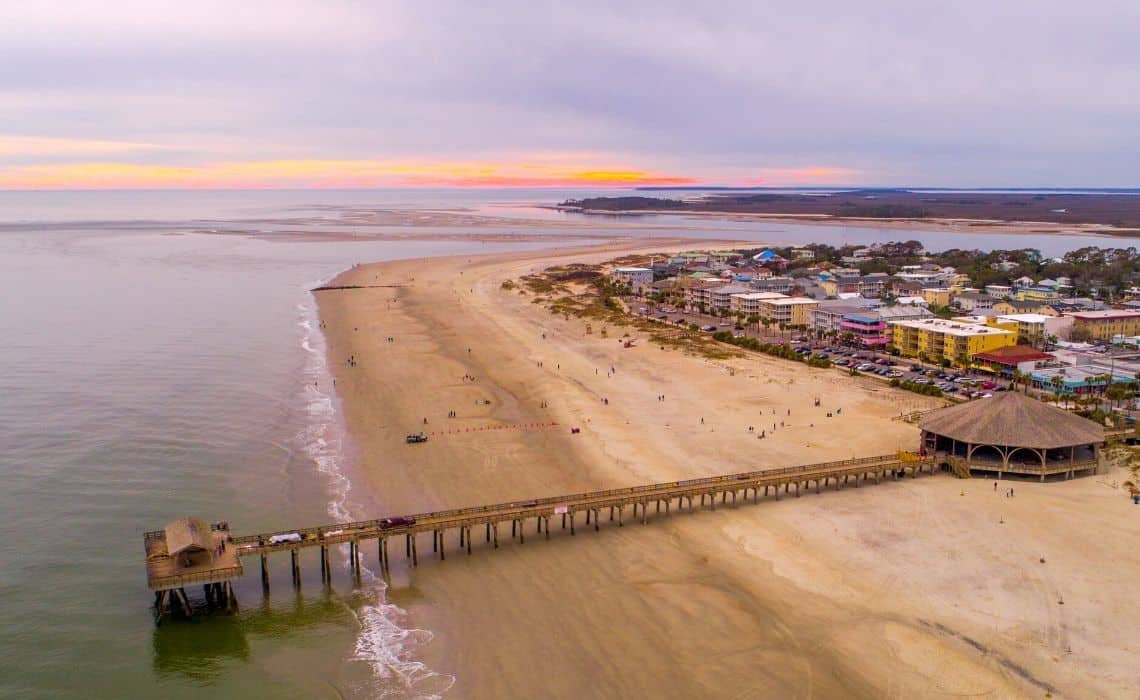 Twenty minutes from downtown Savannah, Tybee Island is the place to enjoy beautiful beaches and some relaxing time in nature. There’s plenty of options to get active, with kayak and bicycle rental available and loads of hiking trails as well. Local artists sell their wares in the quaint town on the island, while after dark, the area also boasts a vibrant nightlife.

In Savannah’s Historic District, there’s an open-container law for drinks. That means you can stop off at bars and get cocktails to-go, letting you enjoy a drink as you wander the area and discover the beautiful architecture and interesting stores. It even makes for a fun way to enjoy self guided Savannah walking tours.

There’s plenty to discover and love in this gorgeous city. Start it all off with a historic walking tour Savannah, and you’ll be well-prepared to continue explorations of the Hostess City of the South. 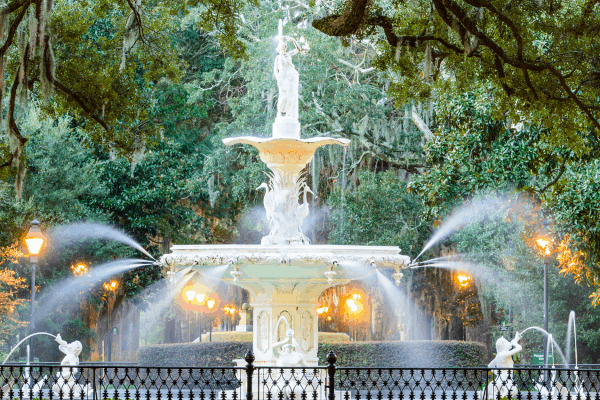 Is this your first time to Savannah? We can almost guarantee it won’t be your last. Savannah has more than her fair share of secrets, and this tour is set to clue you in on a few of the best…