Miami walking tours are the best way to get to know this fascinating city of decadent nightlife, creative arts, and vibrant culture.

Colorful, eclectic, and glitzy, there’s just something special about Miami. This city on the eastern coast of Florida has it all, from its dazzling nightlife to its beautiful climate to its vibrant Hispanic culture.

The most famous part of the city is, of course, the alluring promenade along South Beach, with its eye-catching collection of Art-Deco hotels and waterfront restaurants. One of the most popular tourist hot spots in the country, this slightly faded area of the city was one of the first haunts of the rich and famous, flocking here to bask in the southern sun on the soft white sand. As you explore, it’s hard not to be drawn into the restaurants, posh nightclubs, and poolside terraces.

Step away from the glitz and glam of South Beach, and you’ll quickly discover a city that has embraced diversity. Over two-thirds of Miami’s residents are Hispanic, meaning you’ll hear Spanish spoken here just as much as English. The large Cuban population has been migrating here since the 60s, as have more recent arrivals from Colombia, Haiti, Nicaragua, and Venezuela. There’s an astonishing breadth of cultures throughout the city’s neighborhoods.

As a result, the food culture in the city is also diverse. Central and South American flavors mix with the hearty American dishes and fresh seafood, meaning foodie travelers will have a blast. When you’re full, you can also dive into the city’s vibrant art scene, shop until you drop, or escape the city and explore the bounty of nature in the surrounding region.

Sizzling, lively, and boundlessly fun, this Florida city will enchant you no matter the type of traveler you are. Miami walking tours are the best way to discover it all.

For thousands of years before the arrival of Europeans in Florida, the area we know as Miami was inhabited by the Tequesta Native American tribe. Spanish explorers visited the site from the 16th century, but the first permanent settlers wouldn’t arrive until 1800. Things kicked off for Miami in the late 19th century after avoiding the great Florida freeze of 1895, after which development began in earnest.

Two important characters were involved with the boom in development in Miami. A woman named Julia Tuttle, a widow who owned several parcels of land around Biscayne Bay, was the first. At the same time, the industrious Henry Flagler was building the Florida East Coast Railway, connecting the major settlements. Although Tuttle asked him to extend the railway to Miami, Flagler refused.

When the great freeze struck Florida, sending temperatures plunging across the state and decimating the citrus industry, Miami avoided it completely. Suitably abashed, Flagler agreed to build his railway to Miami, jumpstarting the city’s growth.

Miami’s enviable climate was also why it was earmarked as a potential resort town in the early 20th century. Hoteliers began to build their art-deco resorts, creating a glitzy destination for the rich and famous. Growth also came from nearby navy bases, with sailors enjoying their time off in the city’s bustling restaurants and bars.

Revolutions and war in Latin America during the 20th century saw an influx of immigrants to the city, most famously from Cuba. Cubans arrived in two separate waves; the first was in the 1960s from large groups of people opposed to Fidel Castro, and then again in the 1970s from those in search of opportunity and a better life. Immigration has changed the face of the city and continues today as political shifts in South and Central America lead to further arrivals.

There’s no doubt that Miami has a fascinating and unique history. To discover it all, our walking tour of Miami is the perfect companion to your travels. It’s also available as a Miami virtual tour, letting you enjoy the tour from the comfort of home.

Where to Stay in Miami

The Best Neighborhoods to Stay in Miami 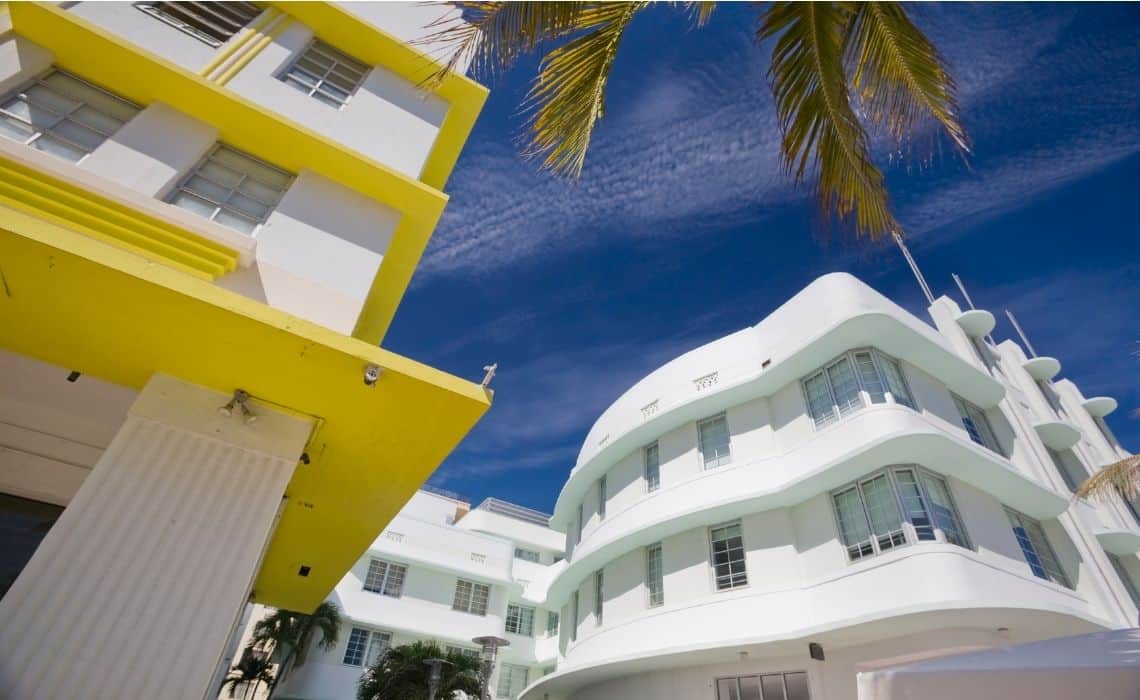 South Beach is exactly what you picture when you think of Miami. This legendary neighborhood occupies the southernmost area of Miami Beach, known for its boisterous nightlife, stunning promenade, art-deco architecture, and of course, the inviting beach. It’s one of the most expensive areas in the city, but it’s also where most of our Miami walking tour takes place.

Another fantastic for travelers area to stay in Miami is Downtown. This is where you’ll find the cities best museums alongside the skyscrapers, from the History Museum to the Children’s Museum. It’s also home to the arena where the Miami Heat play, a popular activity to do for tourists in Miami.

Surfside in Miami Beach is a lot more low-key and relaxed than further south on the island. This upscale and residential beachside community is great for families, with a beautiful downtown area that’s easily walkable and filled with friendly restaurants, bars, and shops. When it’s time to venture into South Beach, it’s just a 20-minute drive away.

Back on the mainland, west of downtown Miami is the neighborhood Little Havana. When Cuban immigrants arrived in Miami during the 1950s, they settled here, and the community has been a bastion of Hispanic culture ever since. You’ll find Latin-inspired restaurants, cafés, shops, and more, while the accommodation is far cheaper than many other places in Miami.

For something completely different, Key Biscayne is a fantastic area to stay for families and those who are after something a little bit more low-key than Miami Beach. Connected to the mainland via a 7-mile bridge, there are two state parks, letting you kayak, standup paddleboard, bike, kiteboard, and more.

What to Eat in Miami?

5 Iconic Foods to Try in Miami

If Miami has an iconic dish, it has got to be stone crabs. This tender and delicious crab meat is available in the seafood restaurants from October until May, served chilled on a bed of ice with accompanying sauces for dipping. The restaurant Joe’s Stone Crabs is the city’s most famous spot to try the meal. This legendary spot has been operating in South Beach for more than 100 years.

Arepas are a Latin American favorite that has found a welcoming home in Miami. This street food-style dish is a cake made from corn, stuffed with all kinds of ingredients, from vegetables to pulled pork, cheese, and avocado. It can either be a great snack for a Miami Beach walking tour or enjoyed as a larger meal with more hearty ingredients stuffed inside.

It wouldn’t be a trip to Miami without sampling a Cuban sandwich. This dish originated in the cafés of Key West, as restaurants began to cater to the influx of Cuban workers arriving in the city. Made from Cuban bread, the sandwich includes roasted pork, baked ham, swiss cheese, sliced dill pickles, topped off with a splash of mustard. Delicious.

Chicharron is a staple snack food from South and Central America, which has found a welcoming home in Miami. It’s simply fried pork skin, with a bit of fat and meat as well (making it different from simple pork rinds) – a great snack to enjoy with a Miami art deco walking tour.

The perfect way to finish any meal in Miami is with a heavenly slice of key lime pie. This dessert is popular around Florida, with subtle and sweet lime flavors combining with a crunchy crust and creamy texture. You can find it on most restaurant menus in the city.

Creativity runs through the streets of Miami, a characteristic no more apparent than in the Miami Design District. The brainchild of a local developer and philanthropist, this area is filled with public art installations as well as high-end fashion, furniture, and design stores. For a day of shopping and dining, there’s nowhere better. After you’re all shopped out, take a stroll over to Wynwood for a coffee in one of its chic cafés before discovering some of the best street art and galleries in the city. 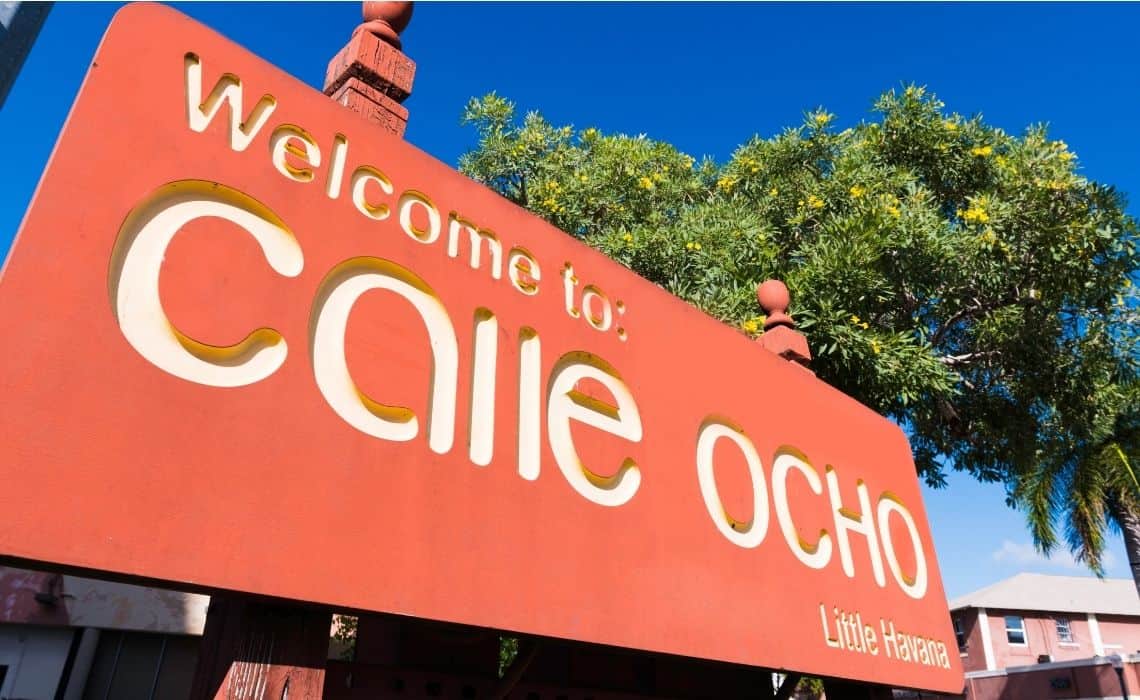 A world away from South Beach, Little Havana is a fascinating look into the prevalent Cuban culture in Miami. This lively area is centered around Southwest 8th Street, also known as Calle Ocho. This is where you’ll find a wealth of Cuban restaurants and bakeries, regular street festivals, and plenty of Cubans smoking cigars and spending time outdoors with their families. There’s live music, fantastic food, and a lively vibe; the area is well worth visiting.

Miami is surrounded by some beautiful tropical nature, perfect for day trips from the city. Whether you’re exploring the Florida Keys archipelago of islands, heading into the Everglade wetlands, or even catching the ferry to the Bahamas, there’s plenty of ways to bask in this beautiful tropical area.

The 5 Best Day Trips from Miami

As you can see, there’s a lot to discover in Miami, one of the U.S.A’s most unique cities, filled with fun. Miami walking tours are an easy way to discover the Art-Deco architecture and fascinating history of this fun-filled city in Florida. 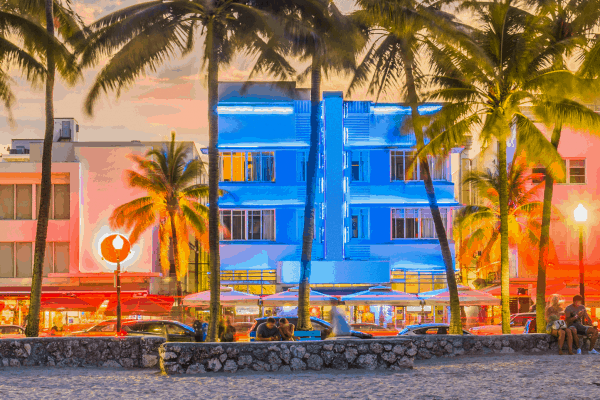 Our tour is perfect for those wanting to learn more about the famous architecture of this resort city. The tour covers some of the best buildings from the 1930s, focusing on the “modern style” of that era. First, it provides…