Our self-guided walking tour Philadelphia will help you discover the history and sights of this city where the American ideal came to life.

Philadelphia is a city rich in history and culture, complete with a sumptuous food scene and delightful small-town atmosphere. One visit, and you’ll see why so many people fall in love with Philly and its American charms.

First and foremost, Philadelphia is a city known for its history. On the 2nd of August 1776, the Declaration of Independence was signed here, signaling an end to Great British rule in America.

In 1787, it was also in Philadelphia where the American Constitution was written and signed, the charter of government that continues today. To visit Philadelphia is to dive into the entire foundational history of the U.S.A.

You might think that with such status, Philadelphia would be a huge, bustling city. And it is – but there’s still a delightful small-town atmosphere. The tight-knit community across the city is friendly and welcoming, taking pride in the beautiful architecture, local businesses, and vibrant street art adorning their city. While some parts are still run-down from the economic woes of the 20th century, there are a lot of areas emerging as up-and-coming districts thanks to extensive civic development projects.

As you wander through town, you’ll also discover a multifaceted food scene that rivals that of New York, Chicago, and New Orleans. Over the past decade, an influx of immigrants has brought fresh flavors into the city, adding to their lineup of all-time classics, like the famed Philly Cheesesteak sub.

It was also Philadelphia that gave birth to the renaissance of craft beer across America, and today features enough stylish watering holes to keep you coming back again and again.

A self-guided walking tour Philadelphia uncovers the important history of this destination, setting you up with a fantastic foundation for further urban explorations of the city. Welcome to Philly.

The settlement of Philadelphia was founded in the year 1682 when the Quaker Pacifist William Penn arrived. Signing a peace treaty with the Native Americans, who had been in the area for thousands of years, the settlement was one of the few in America that began without clashes with the Indigenous population. This foundation of tolerance and human rights would be tested when thousands of enslaved Africans arrived in the city in 1684. The Quakers organized in 1688 the Germantown Petition Against Slavery, the first of its kind in the world.

The Spark of Revolution

Philadelphia turned into a thriving little town, quickly becoming the center of shipbuilding for the American colonies. As a center of trade, the economy boomed and by 1701 had grown from a few hundred to over 2,500. In the 1760s, the British Parliament passed tax acts on the colonies, increasing tension in America.

In the 1770s, when even more acts angered the colonies, the First Continental Congress gathered to discuss options in 1774 in Philadelphia. In 1775, when the Battles of Lexington and Concord kicked off the American Revolutionary War, delegates from the colonies once again gathered in Philadelphia, this time to sign the Declaration of Independence and discuss their plan to free themselves from Great British rule.

Philadelphia and the Civil War

During the Civil War, Philadelphia was a key city for the Union. Weapons and ships were manufactured here, and it was also home to the two biggest military hospitals in the United States.   At first, Philadelphia had close relations with the Confederate States in the south. Soon after the war started, opinions in Philadelphia quickly shifted in support of the Union. It would go on to become an important center in the battle against the Confederate States.

During World War I, the Philadelphia shipyards were once again in full swing. But by World War II, the industry was in decline, completely disappearing soon after. Tough times struck, with racial tensions, poverty, and high rates of unemployment. But thanks to projects aimed at re-energizing the city, Philadelphia is once again on the up, driven by a surge of millennials and immigrants moving to the city in search of new opportunities.

There’s no place better to understand the history of the U.S.A or refresh your memory on the details. Our historic Philadelphia walking tour below visits all the places in the city where the American ideal came to life. It’s also available to do from the comfort of home as a virtual tour of Philadelphia. 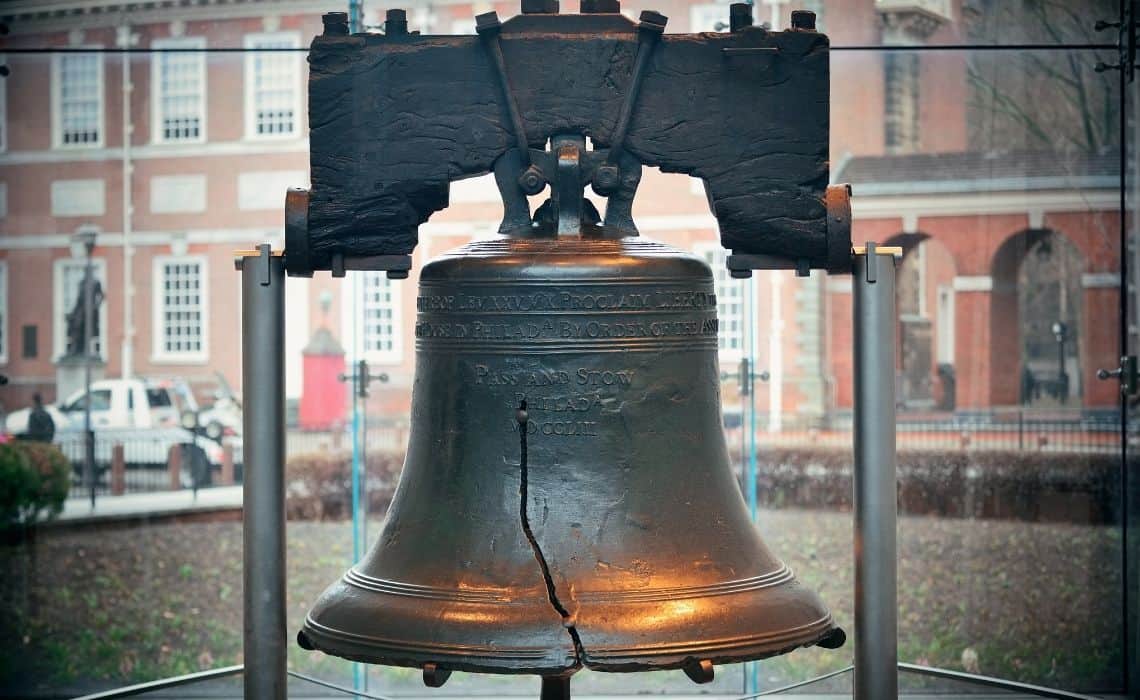 Where to Stay in Philadelphia

The 5 Best Neighborhoods to Stay in Philadelphia

One of the best places to stay in Philadelphia is in the Old City neighborhood. This is where William Penn and his band of settlers first set up shop in Philadelphia on the banks of the Delaware River. As such, it’s also home to some of the city’s most important attractions, from Independence Hall to the Liberty Bell. It’s also where our walking tour of Philadelphia takes place.

Just to the west of Old City is Philadelphia’s downtown area, also known as Center City. Filled with gleaming skyscrapers and home to the impressive City Hall, it’s also a popular destination for visitors to stay. From here, accessing the rest of the city is easy, and the area is also filled with plenty of restaurants, bars, and stores.

Rittenhouse Square is a neighborhood that anchors the southwestern corner of Center City. It’s a great place to hang out in Philly, loaded with alfresco cafés, restaurants, bars, as well as galleries and indie boutique stores. The residential apartments here are some of the most expensive in the city,

Immediately to the south of Old City is Society Hill, a beautiful residential area of cobbled streets and beautiful homes from the 18th and 19th centuries. Upscale and quiet, it’s a lovely area to wander around and admire the architecture. A handful of cafés, restaurants, and bars line the streets.

Finally, Logan Square, towards the northwest of the city, is a great place to stay in for those after a healthy dose of culture. There are plenty of art galleries and museums in the area,

What to Eat in Philadelphia?

The 5 Must-Try Dishes in Philadelphia 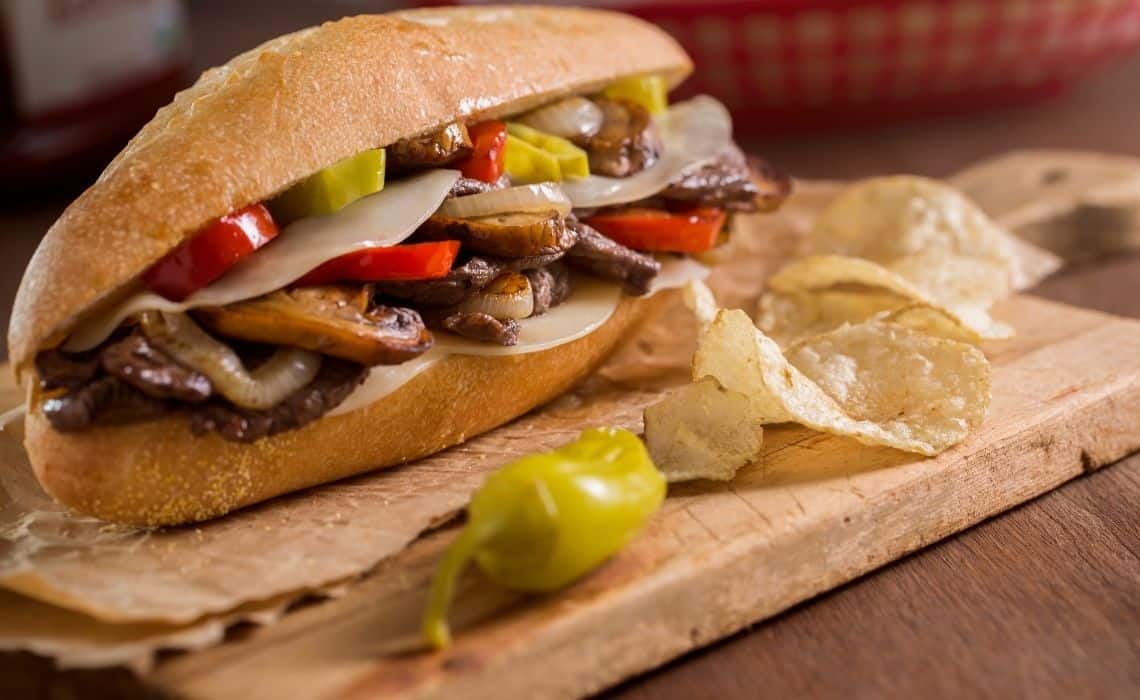 Without a doubt, Philadelphia’s most iconic meal is the Philly Cheesesteak. This sub features thinly sliced roast beef served on a crusty bread roll with cheese: simple, delicious, and a wonderful way to celebrate your visit to Philadelphia.

Another sandwich to try when in town is the hoagie. Born from the minds of the Italian population in the city in the 20th century, it’s a delicious way to cap off any self guided walking tour of Philadelphia. Loaded with fresh cuts of Italian meat, like prosciutto and salami, the sandwich is topped with aged provolone cheese, oil, vinegar, and oregano.

A relic from the German immigrants to Pennsylvania, scrapple is a mixture of pork, cornmeal, wheat flour, and spices. It’s all combined and formed into a loaf, slices of which are fried in a pan before serving. It’s a food that’s unique to the area and well worth trying.

A Philly soft pretzel is the city’s favorite on-the-go snack, another food introduced by German settlers in the 18th century. Find them at food carts, newsstands, and on street corners across the city, best enjoyed with a side of mustard or beer cheese. Look at them like Philadelphia’s answer to the New York City hot dog.

Philadelphia is home to the largest population of Vietnamese Americans on the east coast. As such, sampling the pho here is the next best thing to being in Vietnam itself. For a bowl of the good stuff, head to the Little Saigon neighborhood, south of Center City.

Over the past decade, the craft beer craze has quickly swept across the United States. But Philadelphia has been at the forefront of this trend since its inception, now considered one of the best beer cities in the world. There’s plenty of world-class breweries to discover, both in and outside of the city limits, and a calendar of beer-related events as well.

Over recent years, Philadelphia has also garnered the reputation as one of the world’s largest outdoor galleries, thanks to an abundance of street art. A robust city arts program helps fund the works, which are scattered across every neighborhood in Philly. After you’ve finished with the history, delve into the modern-day with a self-guided tour of mural mile Philadelphia. It’s a great way to get to know the city. 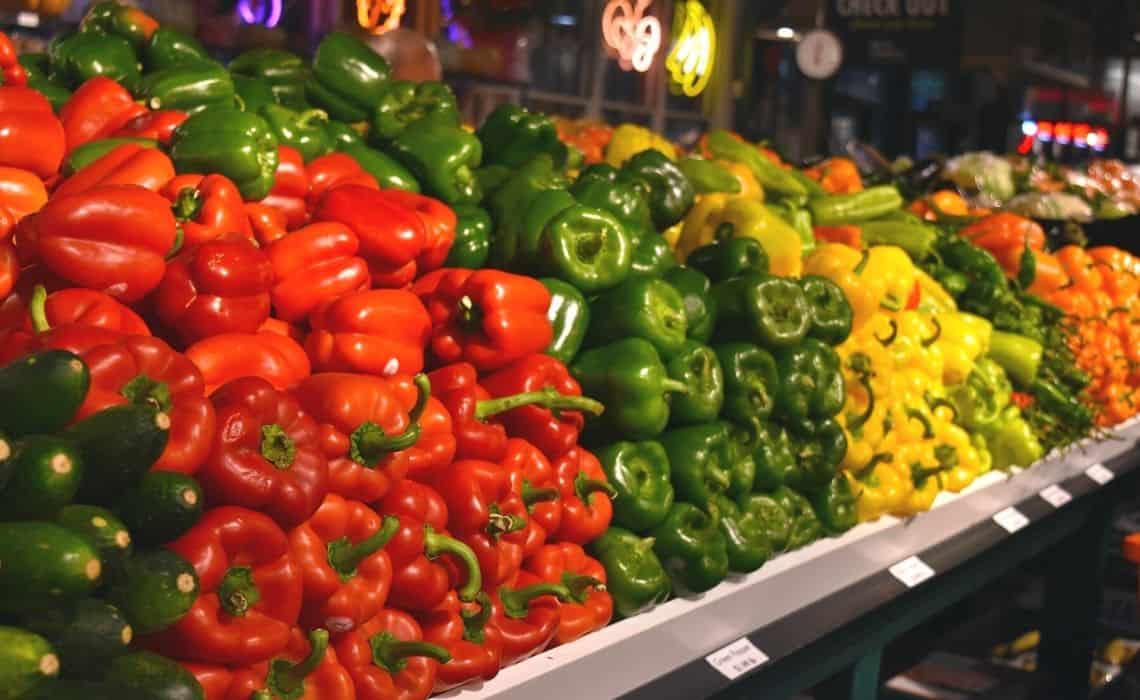 Foodie travelers in Philadelphia will want to put this at the top of their bucket list. The Reading Terminal Market dates to 1893 and is the beating heart of the food scene in the city. Striking the perfect balance between market and dining destination, visitors can discover all kinds of food in 75 local stalls. It’s a taste of the vibrant community that makes up Philadelphia.

Before you do anything, our self-guided walking tour Philadelphia below is a quick and easy way to get your bearings in the city. Covering the extensive history and impressive sights, you’ll be well-positioned for even more urban adventures in Philadelphia. 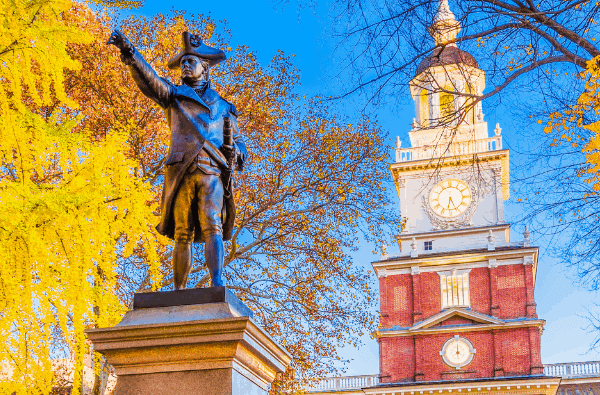 Philadelphia gave birth to the American experience – the life, liberty, and pursuit of happiness that defines the country. On our tour, we'll visit the places where the American ideal came to life. We’ll give you a taste of why…