Our self guided walking tour Portland offers an easy and interesting way to get to know this off-beat and alternative city in Oregon.

Portland is a city that has it all. This destination in Oregon is an inviting city with a welcoming small-town atmosphere. It boasts fantastic nature on all sides and enjoys a world-class food scene. When you throw in the creative locals, excellent beer, music, and art, you can start to see why so many people have fallen in love with Portland.

Upon arrival in the city, it’s impossible to ignore the beautiful nature that surrounds the city. This historical frontier town still sits at the edge of wild natural spaces, from the stunning Oregon Coast to Mt. Hood on the nearby horizon. Inside the city limits, leafy parks and green spaces mean that there’s plenty of opportunity for a breath of fresh air while you explore.

Portland is undeniably one of the culinary capitals of the U.S.A, with award-winning restaurants, cozy pubs, chic bistros, and a buzzing food cart scene all coming together. Local ingredients flow in from Williamette Valley while a bounty of fresh seafood arrives from the coast. Sustainable, local produce is the name of the game here, while food trends – be it Korean BBQ or South American cuisine – leave behind a trail of mouthwatering restaurants that cater to global tastes.

What makes Portland unique are the locals. ‘Keep Portland Weird’ is the city’s unofficial slogan, and the eclectic population who live here embrace the saying wholeheartedly. Art, music, and creative endeavors flourish across the city, giving you a glimpse into the weird, wonderful, and crazy. It’s a treat to experience. 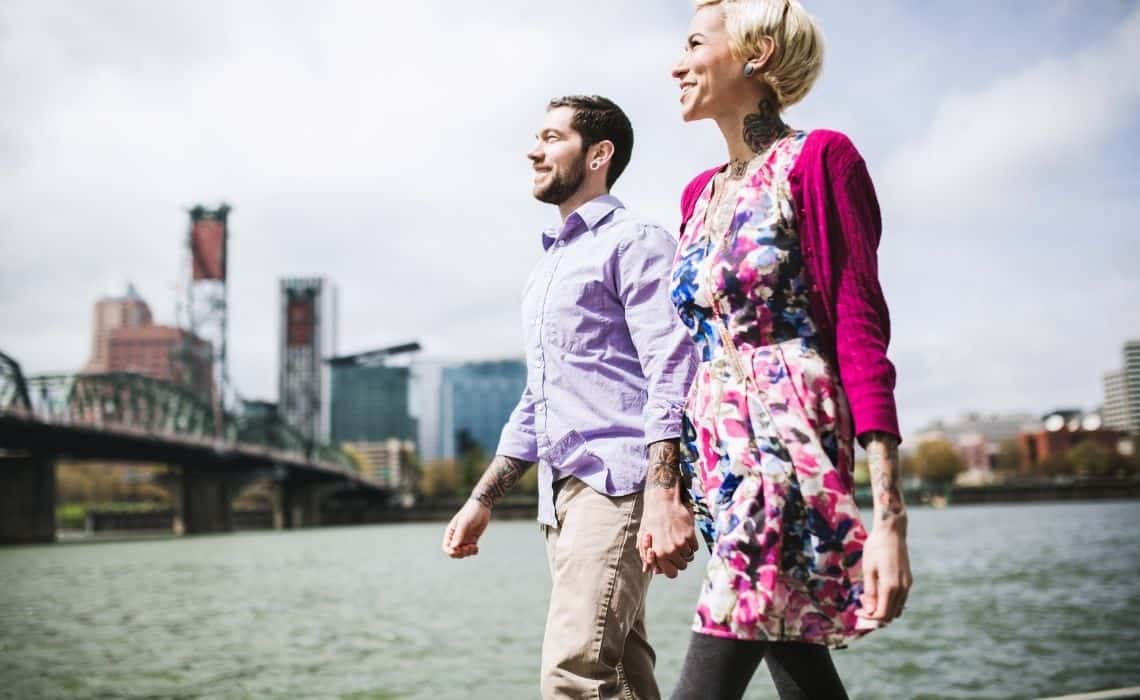 To get to the heart of this unique destination in the U.S, our self guided walking tour Portland is your best bet. From the history and settlement to some of the city’s modern attractions, you’ll have a great base of knowledge for further explorations.

The Founding of Portland

In the early days, Portland was simply known as “the clearing” to fur trappers, traders, and settlers. It was nothing more than a rest stop by the river as they traveled between Oregon City further to the south and Fort Vancouver to the north. In 1843, two men beached their canoes on the bank of the Williamette River, struck by the beauty of the surrounding area. They decided it was the perfect spot for a new settlement, and building began. By 1850, the population had grown to about 800 people.

The Lewis and Clark Centennial Exposition

Portland had become a bustling trade town, with easy access to rail, road, and river. Although it suffered a few setbacks, such as fires and floods, generally, the city boomed in the latter half of the 19th century. In 1905 the city hosted that year’s World Fair, named the Lewis and Clark Centennial Exposition. The event increased recognition of Portland around the country, causing the population to swell to over double its size by 1910.

In the years leading up to World War II, Portland began to boom again. The U.S. Congress was funding the expansion of the Navy, increasing the number of supplies being shipped to Britain and its allies. Shipyards were built in Portland to construct Liberty ships and aircraft carriers, creating thousands of jobs, and drawing even more people to the city, and fuelling its expansion and growth.

In more recent history, Portland was one of the cities at the heart of the dot-com boom of the late 20th century. Thousands of young professionals flocked to Portland searching for work in the numerous tech companies that were popping up. The frantic rush to take advantage of the advent of the early internet caused riches and ruin when it all came crashing down in March of 2000, taking many companies with it.

The history of Portland is a tale of booms and busts, of trade and crazes. It’s a fascinating story of a frontier town, best discovered on our walking tour of Portland. For those who can’t travel to the city, it’s also available via our app, letting you do this Portland sightseeing tour from the comfort of home.

Where to Stay in Portland

The Best Neighborhoods to Stay in Portland

To be in the thick of the action, next to the city’s main sights, with easy access to restaurants, bars, and cafés, choose Downtown Portland. Compact and walkable, you’ll easily be able to explore on foot, and there’s a wealth of public transport options when it comes to venturing further afield. Most Portland city tours take place in this area as well.

Head north of downtown, and you’ll find the Pearl District, a bastion of Portland lifestyle, art, and food. An eclectic range of unique stores sit side by side with some of the city’s best galleries, while stylish bars and restaurants keep everyone well fed and watered. The area offers a nice balance of location, things to do, and dining options.

Just west of the Pearl District is Nob Hill, a small neighborhood within the bigger Northwest District. Also known as “Uptown,” this area is home to the famous Northwest 23rd Avenue, one of the best shopping strips in Portland. It’s also at the base of Forest Park, the largest green space in the city. Packed with things to see, do, eat, and drink, the area is more residential than downtown and the Pearl District.

On the eastern side of the river, the Lloyd District is a great all-around choice for staying in Portland. Sports fans will love being close to the Moda Center, where Portland’s NBA team, the Trailblazers, regularly play. The arena is also a regular venue for some of the biggest touring artists from around America and the world.

Finally, Central Eastside is where to go if you want to rub shoulders with the indie, alternative, and hipsters of Portland. This area is abuzz with craft beer bars, third-wave coffee shops, and creative boutiques, the industrial character of the neighborhood has slowly changed into the cool area you’ll find today. It’s great for budget travelers as well.

What to Eat in Portland?

Rather than a slew of signature dishes, Portland loves a good restaurant trend. One minute it might be juicy burgers at the pub, the next Vietnamese and Thai food.

Thanks to its location near the Pacific Ocean, Portland enjoys a steady stream of fresh fish and shellfish flowing into its restaurants. Whether you’re after some fresh oysters or crawfish, the seafood here is sublime. The fresh fish also makes Portland a hot spot for some fantastic sushi as well.

Thanks to Portland’s long-standing affair with beer (see Insider Information below), the city also has a fantastic choice when it comes to delicious burgers. Burgers and beer have been a classic combo for an age now, and where there’s one, you’ll usually find the other. Perfectly filling and juicy, they’re a great way to cap off any Portland walking tour.

Perhaps one of Portland’s most iconic features of its food scene is the abundance of food carts you can find around the city. From spicy, southern-style fried chicken to Korean bibimbap to Mexican tacos, nothing says Portland like visiting a food cart for lunch or dinner and wolfing down your food while sitting on the curb.

Arguably the city’s favorite snack, doughnuts in Portland are just about as good as they come. There are plenty of bakeries around the city dedicated solely to making these soft, delicious treats. Locals are heavily divided on the best, so instead, just try as many as possible. The city’s most popular doughnut spots are Voodoo Doughnut, Pip’s Original, and Blue Star.

Portland has had a big Chinese population since the 1850s – as such, the Chinese food in the city is fantastic. Whether you’re after some Shanghai dumplings or Hong Kong dim sum, head to Old Town Chinatown (downtown Portland) to track down your favorites.

Beer Capital of the U.S.A

Nowadays, it might seem like every other city in the U.S.A. is obsessed with craft beers. But Portland is a haven for craft-brew-fanatics; the city claims to have more breweries than any other city on earth (over 70 and counting). Locals have even taken to calling the city “Beervana.” Visitors will love sampling the different craft breweries or attending one of the annual beer festivals, of which the city has nearly as many as it does breweries.

There are tales of an extensive network of catacombs underneath Portland, dating to the mid-19th century when the town was abuzz with traders and sailors. Rumor has it that the basements of bars and hotels were connected to the port and each other by a web of tunnels. Able-bodied men were kidnapped, whisked away into the tunnels, and sold into slavery onboard trading ships. Today, historians are skeptical about whether it’s a fact or fiction – but you can join tours to peek inside these basements and decide for yourself. 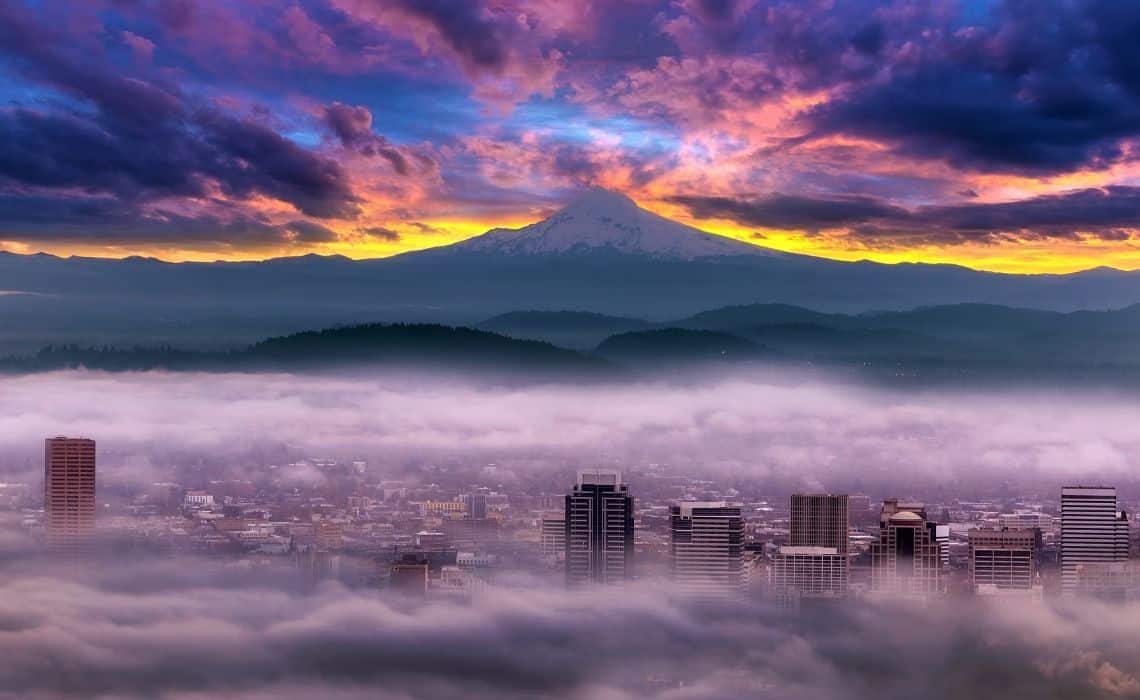 Portland sits on the edge of an amazing number of natural spaces, perfect for exploring after you’ve wrapped up your walking tour of the city. In the city limits, there’s plenty as well, from the Tom McCall Waterfront Park to the 400-acre Washington Park. Stretching away to the northwest is the sprawling Forest Park, with temperate rainforest and a wealth of walking trails, while the stunning Oregon Coast is only a 90-minute drive.

Our self guided walking tour Portland is a fantastic way to get to know this destination on your next city break. 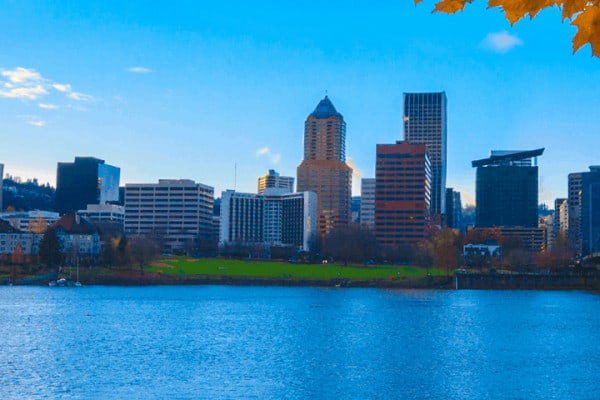 As you’ll find on our tour, Portland is a great town for walking. It’s mostly flat, with a compact, almost European-style layout and an abundance of parks and open spaces—thanks to the city’s unconventional approach to planning and transportation, especially…