Our self guided walking tour Seattle will let you discover the coffee, culture, architecture, and history of the Emerald City in Washington.

Welcome to Seattle, one of the gems of West Coast U.S.A. From its incredible coffee culture to a history of booms and busts, there’s plenty to discover in the Emerald City, the largest in Washington state.

Seattle is a foodie city. Located on Puget Sound, there’s a bounty of fresh seafood flowing into the city every day and a strong focus on supporting local farmers as well. The epicenter is Pike Place Market, heaven for foodie travelers and one of the city’s most famous sights. Since 1907, this market has been an integral part of the food culture in Seattle and is responsible for the local chefs’ incredible experimentation and creativity.

The focus on local and sustainable in Seattle’s food scene extends to the shops and businesses as well. Despite being the birthplace of mega-corporations like Microsoft, Amazon, Boeing, and Starbucks, there’s a delightful focus on smaller, run-by-locals companies. From craft beer halls to concept coffee stores, it’s trendy, unique, and oh so cool.

Visitors to Seattle will love the variety of local attractions, from the iconic Space Needle in the center of it all to the pine-covered hills surrounding the city. The best way to get started on any trip is with our self guided walking tour Seattle, touring the main sights and setting you up with interesting historical tidbits that will entice you to explore even further.

The settlement of Seattle dates to 1851 with the arrival of Europeans in the area, establishing a town that at first was called New York-Alki. The indigenous Native Americans lived on the land for thousands of years previously and had set up extensive trade networks and villages in the area. For the most part, the two cultures began to live together peacefully, and there are many Native Americans who continue to live in the area today.

Growth of the City

In its early years, the economy of Seattle revolved around a lumber mill. There was plenty of material to keep the mill churning with dense forests on the land around Puget Sound. Most of it went to San Francisco, where ships were being built to facilitate trade across the Pacific. Seattle became known as a forward-thinking city; liquor, prostitution, and gambling were common and used to attract the sailors and lumberjacks needed to keep the economy growing.

In the 1870s, Seattle was connected to the rest of America with the transcontinental railroad. Suddenly, the city boomed in population, quickly becoming the main port from which traders left for Asia. It would boom again during the Klondike Gold Rush in the 1890s when gold was found in the Yukon territory in Canada. Thousands poured in from around the country, using Seattle as the port from which they sailed north to try their luck at striking gold.

Even after the Klondike Gold Rush came to an end, Seattle continued to grow, increasing more than four times in just two decades. When World War I struck, the city boomed thanks to its shipbuilding, but once it ended, the economy crashed. It would boom and slump with Boeing aircraft and boom with Microsoft, Amazon, and Starbucks, driving sharp population increases in the early 21st century.

As you wander through the city on our walking tour of Seattle, all these pieces of history and more will start to slot together. It can also be done as a Seattle virtual tour, letting you discover the Emerald City from the comfort of home.

Where to Stay in Seattle 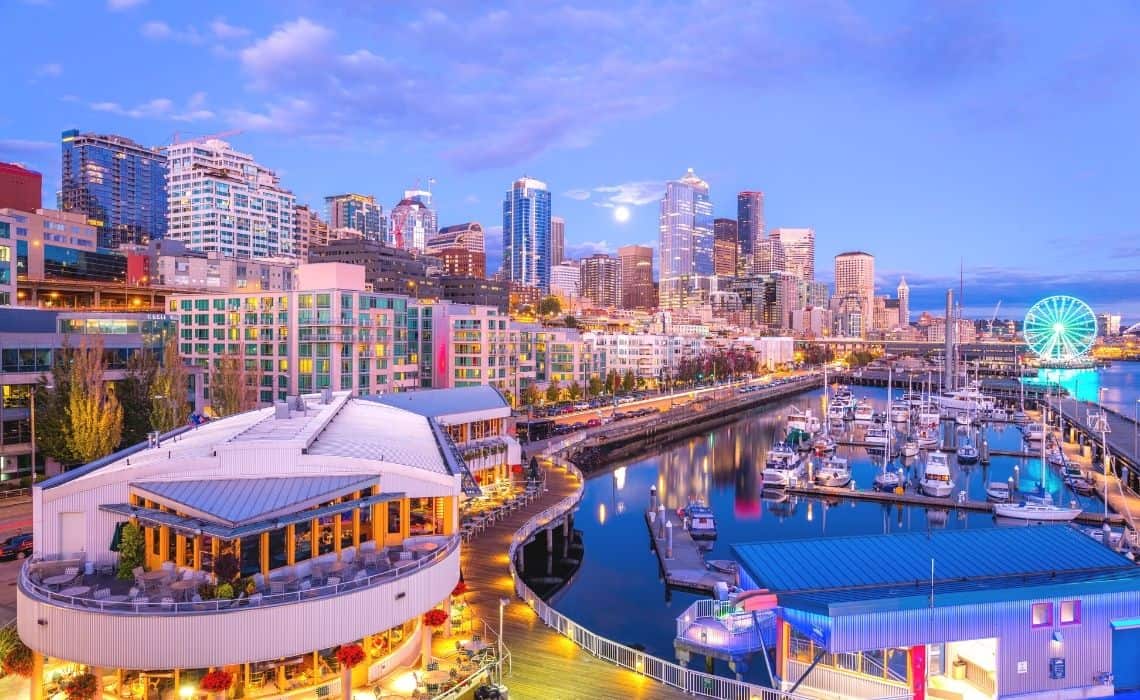 The 5 Best Neighborhoods to Stay in Seattle

First-timers to Seattle will most likely want to stay Downtown. This is the dense center of the city, home to many of the attractions, the best restaurants, and a wide range of accommodation options. As all public transport options also converge in this area, it’s a breeze to explore the city without a car as well.

Pike Place Market is a small part of Downtown Seattle, right on the water. This is quintessential Seattle, home to the original Starbucks, the famous Gum Wall, and the Pike Place Market itself. It is the main area that our Seattle walking tour explores and is, of course, well located if you’re looking to do a Pike Place Market food tour as well.

To the northwest of Downtown Seattle is the neighborhood Belltown, another great option for accommodation in Seattle. It is one of the trendiest areas in the city, loaded with hip galleries, chic restaurants and bars, and unique boutique stores. It’s also within easy walking distance of Seattle’s main attractions, making it a great choice for those after a bit of nightlife with their sightseeing.

To the south of downtown is Pioneer Square, the original downtown area of Seattle. Today, it’s an area of leafy squares, vibrant street life, and world-class galleries. It’s another great choice for your stay in Seattle. It’s also home to the underground houses.

Finally, another fantastic neighborhood to base yourself in Seattle is Capitol Hill. Located to the northeast of downtown Seattle, this is another area known for its trendy, youthful vibe. Thrift stores and vinyl record shops sit side by side with some of the city’s best restaurants and bars. It’s a vibrant place to explore during the day and boasts great nightlife as well. Thanks to its distance from downtown, prices are generally more affordable here.

What to Eat in Seattle?

The 5 Must-Try Dishes in Seattle

If there’s a quintessential flavor for the Pacific Northwest of America, it’s the oyster. Taste the salty flavors of the sea in Seattle’s restaurants, and you’ll immediately get in the mood to jump outside and explore the city, whether the sun is shining or its raining buckets. 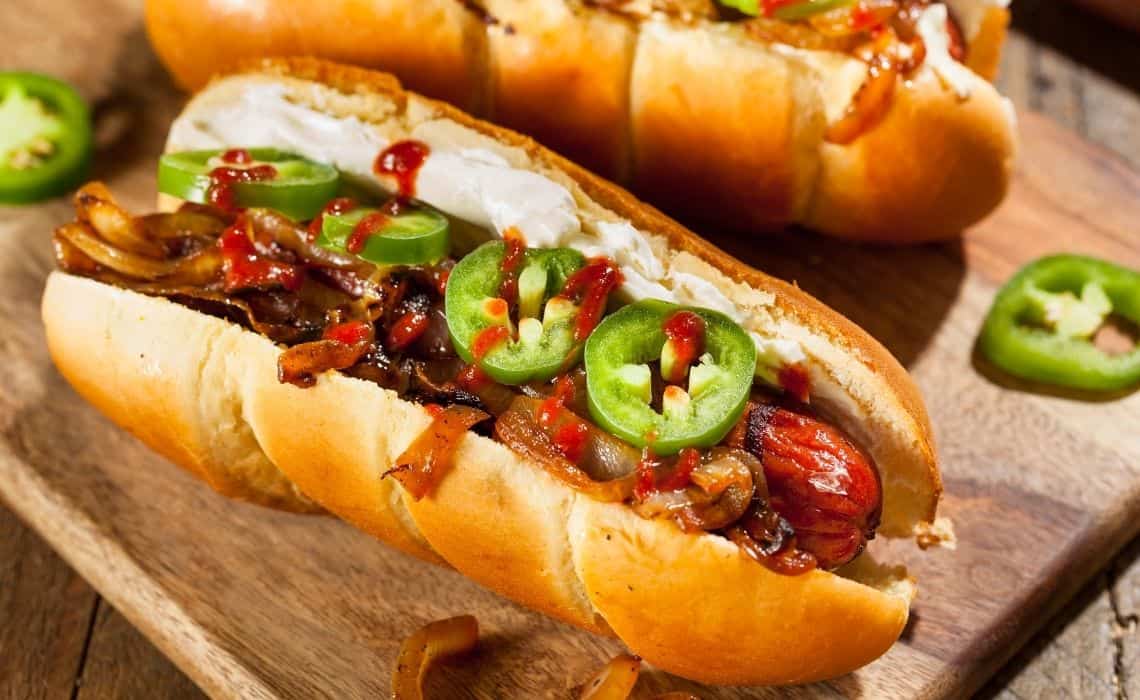 Like elsewhere in the United States, Seattle has its own traditions surrounding hot dogs. The Seattle dog is their take on the preeminent hot dog, varying from the rest of the U.S.A., thanks to the inclusion of cream cheese on the hot dog bun. Other than that, toppings are typical – think things like fried onions, pickles, and mustard.

Much like In-N-Out Burger in California and the Southwest, Dick’s is a chain of hamburger joints only found in Seattle and surrounding areas. It has been a mainstay in the city for an age now and is open late. Often, you’ll find the locals in their local Dick’s after returning from a night of sampling the city’s great craft beers.

Seattle is home to a large Vietnamese community, and as such, there’s a healthy number of delicious eateries across the city. When it’s raining, a delicious bowl of pho is the ideal way to warm up before firing up our Seattle walking tour app and braving the elements.

Finally, although it isn’t a food, coffee in Seattle might as well be. It’s a staple part of the local’s diet and is an essential thing to try while in town. While the city is home to the first-ever Starbucks and a handful of other coffee brands of national fame, there’s also a wide variety of independent brewers to discover as well.

Locals will delight in telling visitors about the amount of rain that Seattle sees as a kind of hazing ritual. But the truth is, Seattle sees an average amount of rainfall that’s less than other cities like New York City and Boston. There are just a lot of days when it sprinkles – not so much of the torrential downpours you see in films and TV series. 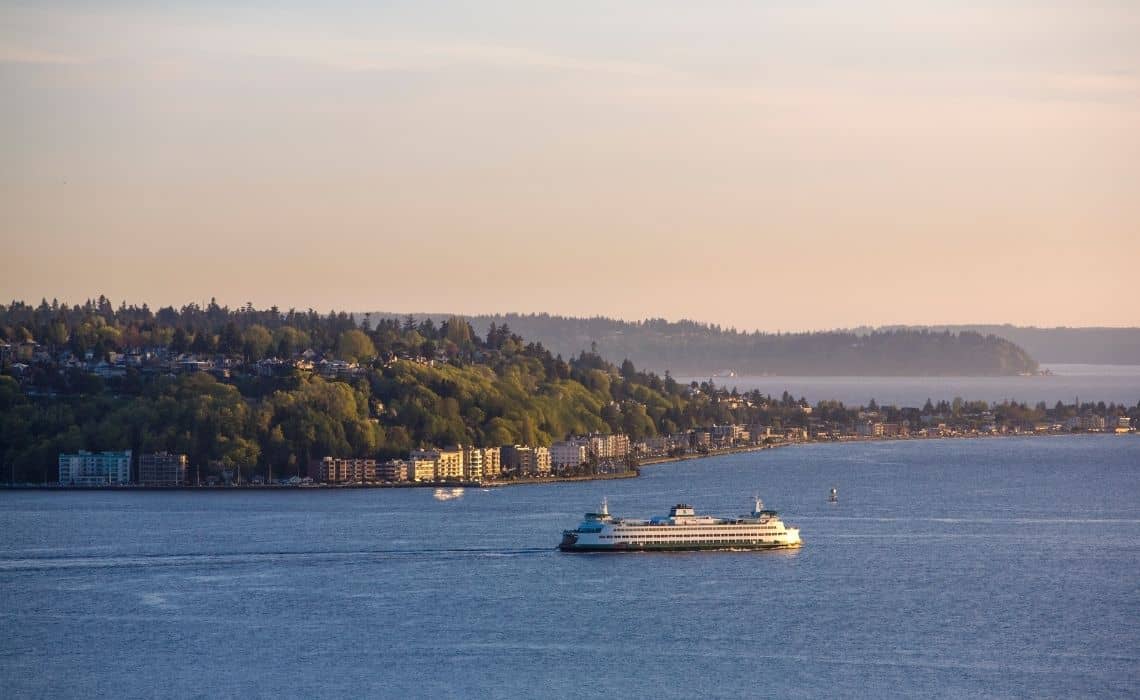 Seattle is a large and engaging city with loads to explore. But it also exists at the edge of a large swathe of incredible nature: Puget Sound. Rivers snake their way across the plains from the Olympic Mountains to drain into the sound, where waterways weave between islands inhabited and not. Ferries leave from the port in Seattle, whisking you across the sound towards islands, towns, and the beautiful and boundless nature of the Pacific Northwest.

The Museum of Flight

As the birthplace of Boeing, the leading supplier of airplanes to companies worldwide, it makes sense that Seattle has one of the nation’s top museums of aviation. The Museum of Flight is located quite a way south of the city center but is well worth the trip. Several large hangars are filled with the history of flight, featuring information alongside fascinating airplanes from all ages, Apollo launch shuttles, and giant rocket ships.

Our self guided walking tour Seattle is the best way to discover this gem of a city in the Pacific Northwest. Below, our Essential Seattle tour covers the history and culture while weaving among the most famous sights. 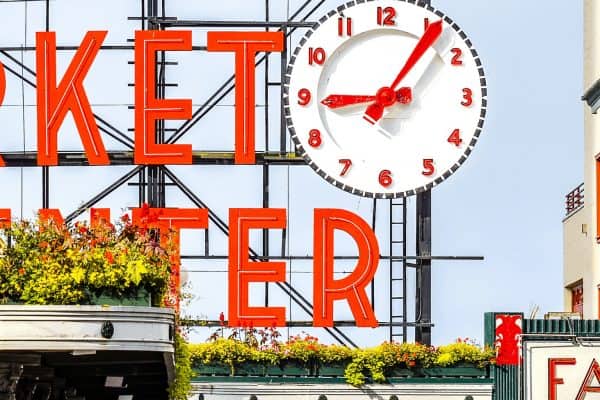 Seattle exists because of two West Coast gold rushes. The first birthed the town, the second ballooned its economy and population. On our tour, we will discover how those events gave rise to the Emerald City and learn about the…